Like healthcare workers across the country, Dr. Ronald Gagliano, a Dignity Health surgeon, was concerned about the shortage of personal protective equipment as the COVID-19 crisis deepened.

A U.S. Army veteran who spent 24 years serving his country, including in hotspots like Afghanistan, came up with an innovative solution to the shortage of isolation gowns.

When it comes to the PPE needed by healthcare workers, he said, goggles, shields and the like can be cleaned and reused but it became increasingly clear early on in the pandemic that disposable gowns were going to run short.

By Gagliano’s estimation, the hard-hit Northern cities with higher populations were going exhaust the nation’s supply. “I was watching the national stockpile diminish and said, ‘There’s not going to be anything left for us. We’re going to have to solve this on our own,” Gagliano told Wrangler News.

A team there. was ready to begin working around the clock to create thousands of FDA-approved isolation gowns for Dignity Health employees on the front lines of the pandemic.

Before that could happen though, the hunt was on for a suitable material for the gowns.

Gagliano and his team turned to Precision Fabrics Group in North Carolina which produced 40,000 yards—about 7,000 pounds—ready to be cut, assembled and stitched. But how to get it to Tempe in a timely fashion? 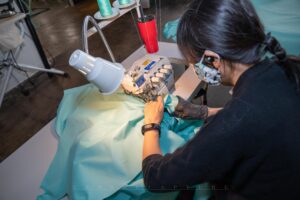 “We get our first 100 gowns off the line and started getting feedback,” Gagliano said. The gowns—about 10,000 so far—are being distributed to Dignity Health hospitals, including Chandler Regional Medical Center.

Angela Davis, co-founder of F.A.B.R.I.C, said the facility is making thousands of isolation and barrier gowns for major healthcare facilities throughout Arizona.

“We’ve made thousands of gowns for Dignity so far and we are currently still fulfilling the order. In total they want about 150,000.”

“I’m incredibly proud of the way organizations from coast to coast are coming together to meet the needs of health care workers providing critical care to those in need,” Gagliano said. “This project is a game changer and a long-term, sustainable business model for all of the health care industry.”