The COVID-19 pandemic and its effect continue but that hasn’t stopped parents, neighbors and friends from coming up with ingenious ways to celebrate graduation.

Then, Brooke Bogart, who organizes the annual Warner Ranch garage sales and GAIN Night, came up with the idea of holding a neighborhood parade spotlighting Corona seniors.

Janet Hamlin, a Warner Ranch resident, doesn’t have a senior at the school this year but she wanted to help Bogart organize the parade. “She saw that another neighborhood was thinking about doing this and she organized a group of volunteers,” Hamlin said. None of the volunteers are parents of seniors, it turns out.

“My son graduated from Corona last year so I know how important it is to feel acknowledged when you go through those major life transitions,” Hamlin said. Organizers are using Eventbrite to register participants and say that so far, they have 40 seniors signed up. At time when so many of us are struggling with uncertainty, illness and job loss, this grass-roots parade effort is a bright spot, an example of what a caring community can do in the midst of crisis. 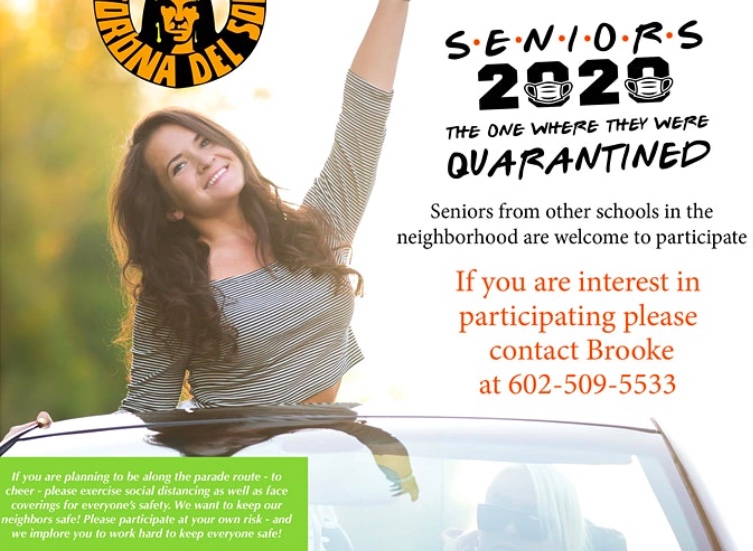 A group of volunteers will manage the staging and the parade route will wend its way through Warner Ranch, past Kyrene’s Mariposa School and on to Harrelson Park at 9325 W. Warner Ranch Drive. The event is open to other students who live in other neighborhoods.

Seniors are encouraged to decorate their cars and have someone else do the driving during the parade.

Tempe City Councilmember Jennifer Adams alongside Rep. Mitzi Epstein of the Arizona Legislature will be grand marshals. Both women live in So. Tempe.

“We’re asking people to get an Eventbrite ticket even though it’s free so we can figure out how big it’s going to be,” Hamlin said.

“The parade is an example of supporting our students during this difficult time.” The district will hold virtual graduation ceremonies May 21, the same date it had planned for the in-person ceremony. “We’re really working hard to creatively and safely honor all of our graduates,” Sterling told me.