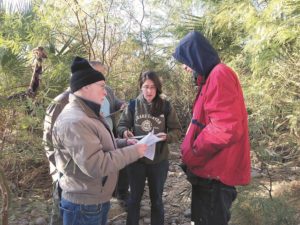 As the sun rose over Tempe on a recent Tuesday, Kevin Brown took to the streets
with a singular mission: help count the number of homeless men and women who had spent the night outside.

The temperature registered a brisk 46 degrees and Brown bundled up in a jacket and black
ski hat, prepared for several hours that would be spent ducking under bridges, peering into makeshift homes and walking through thick brush to find people not always seen.

It was his second year taking part in the Point in Time Homeless Count, a Valleywide homelessness during a set window of time. The count is vital for cities, as the totals help determine how much federal funding they receive to serve people who are homeless.

In Tempe’s case, that funding helps drive an ambitious goal to end homelessness. Since 2016, Tempe has been engaged in an intensified effort to make measurable progress in ending what is a pervasive, complicated, national issue in a compassionate way.

Ending homelessness does not mean there will never be another homeless person in Tempe. It refers to a state known as “functional zero,” meaning that the efficiency and availability of assistance services locally and regionally will be built up to enable future
incidences of homelessness to be reduced, nonrecurring and brief. 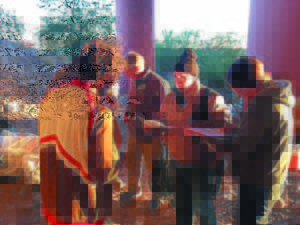 In this state of functional zero, the availability of services exceeds the need.

They have researched the size, scope and scale of homelessness in Tempe, and they have devised and are executing measurable solutions. They work regionally as much as possible, because homelessness knows no borders.

The Tempe City Council has directed additional funding to the effort and is pursuing policy-related solutions such as a Housing First approach to homelessness. Because the council also believes that all residents have a right to clean, safe parks, an important component of the effort has been park-cleanup measures, especially in the Papago Park region, where encampments continue to occur.

Regional count is piece of puzzle
The Point in Time count on its latest mission, coordinated by the Maricopa Association of
Governments, drew hundreds of volunteers who scoured their communities to create a snapshot of the homeless population. 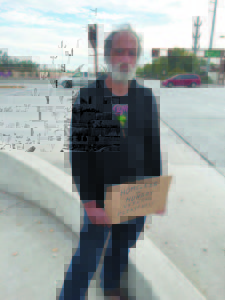 Tempe recruited 73 volunteers to walk the streets. The city worked to get donations of food
and toiletries, partnering with Tempe Community Action Agency for some items. The city also used grant money from the Gila River Indian Community to purchase bus passes that could be handed out.

Volunteers on the street spent roughly five hours assessing and counting as many people as they could. Last year, volunteers counted 202 homeless people. Preliminary results from this year show approximately 250 people counted.

Giving back to the community
On Tuesday, Brown and three other volunteers on Team #2 set out about 7:30 a.m. in search of encampments near Loop 202 and McClintock Drive. The volunteers came from very different walks of life – a parks department retiree turned chaplain, a new mom working in the nonprofit arena, an outreach coordinator for Tempe’s library, and Brown, 69, semi-retired from his IT career.

But their common thread – compassion – was easy to see on that day. Shaking hands with
strangers. Offering granola bars to ease hunger. Listening patiently.

And, in a few lighter moments, sharing a laugh. Having volunteered for the 2017 PIT count, Brown was the veteran of the group. It wasn’t a role he expected to have.

Brown and his wife have lived in north Tempe’s Hudson Manor for more than two decades, and have seen homeless people in their neighborhood park over the years. He considered them a nuisance as he walked his dog in the park each day and suspected that children would avoid the area because of their presence. He often called the police and wrote letters
to the City Council.

“Ever since I’ve lived here, I’ve complained about it,” Brown said.

But when he learned about the PIT count last year, he decided it was time to do more than
complain. He signed up to help.

“It was pretty eye opening,” Brown said. “I guess I have the same prejudices that other
people have who haven’t been homeless.”

“The impression you get is they don’t want to work (but) everybody we talked to had a health or mental health issue or drug and alcohol problem, or just bad luck like losing a job,” he said.