Editor’s note: In our ongoing efforts to widen the accessibility of Wrangler News coverage, we’re now providing online videos in addition to what appears on our printed pages. To view our latest postings, visit wranglernews.com and our Facebook page. 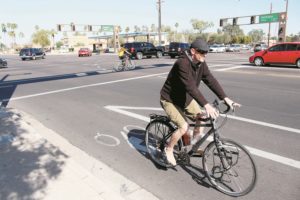 The familiar adage “if you don’t succeed, try and try again” can be applied to Tempe’s ongoing mission to transform the city into a bike-friendly community while maintaining the
continuous flow of traffic on McClintock Drive.

Major changes, no matter what, tend to invite a few bumps and bruises along the way.
In response to Tempe’s initial bike-lane venture, the city has absorbed the sometimes loud voices in the community in order to proactively respond with improvements.

So what’s the lingering problem? Finding the right balance of keeping both drivers and cyclists happy, which has not been an easy feat thus far.

Tempe is moving forward with plans to restore a third southbound traffic lane while maintaining bicycle lanes along a three-mile stretch of McClintock Drive.

Initial work to restripe the roadway between Del Rio and Oxford drives will occur in
1-mile segments Feb. 15 to 23.

“We have received both positive and negative feedback from the McClintock bike lane project. It definitely hasn’t been without controversy,” Julian Desang, city of Tempe Traffic Engineer said.

“We identified the evening peak-hour rush is too congested and is a problem we had to fix. The direction we got from the city council is to preserve the bike lane but also
improve traffic conditions.”

Kevin Jones, an avid cyclist and Tempe resident, is quite familiar with the bike-lane changes because McClintock Drive is his usual travel route.

“I actively chose McClintock because of the bike lane and I use it every single day,” Jones said.

Jones was pleasantly surprised when he heard the news that the city will be implementing change in favor of cyclists.

“I’ve always thought that they needed a bike lane,” Jones said. “But, when they finally put it in, they went a little overboard. The bike lane is oversized.”

The initial work will consist of removing the current striping and restriping to a new configuration. The process will not include moving curbs or landscaping in this section of the corridor, according to a city-issued press release.

Once finished, McClintock will have bike lanes on each side: two northbound travel lanes and three southbound lanes, with a turn lane between them.

“Our first phase will be to obliterate the existing striping, restripe to add the additional driving lane, and micro-sealing the old lines to ensure the safety of drivers,” Desang
said.

The original estimate for the project was $529,00. Actual cost is $296,000, according to TaiAnna Yee, one of Tempe Transportation’s public information officers.

Phase two of the project poses a more challenging fix and will require extensive construction between Southern and Apache due to the narrow nature of the roadway,
according to Desang. Construction will include moving curbs and reworking the landscape.

Although the second step is still in the preliminary design phase, Desang said the estimated completion time will be between nine to 12 months.

The next phase is estimated to cost $3 million, Yee says.

Despite cycling being Jones’ main mode of transportation, he supports the city’s decision to add a third lane southbound to ease the flow of traffic.

A couple of weeks ago, Jones was hit by a vehicle that quickly drove off, pulling out of one of the business centers at Southern and McClintock.

“If this area was a major artery with a ton of bikers, it’d be a different story,” Jones said.
“But the change has created a dangerous situation with bottle-nosed traffic.”

Just as Desang mentioned earlier, the public is both in support and against the initial McClintock bike lane change.

Moving forward, some community members still have reservations about the future of this ongoing traffic project.

Peggy McClain, a Tempe resident, leans toward the skeptical side.

“As far as adding the lane back, it remains to be seen how much this will help,” McClain said. “There is quite a bit of northbound traffic heading to ASU and Scottsdale in the mornings, and it appears this has not been addressed.

“Council says traffic has declined on McClintock. Of course, who wants to use it when it is backed up?”

McClain added:
“It’s funny; I drive on McClintock a minimum of four times a day, often more, since I’m in outside sales. Never once have I seen any of our council members on their bikes on their beloved McClintock bike lanes.”

During the striping portion of the project, traffic will be restricted to one northbound and one southbound lane from 8:30 a.m. to 3:30 p.m.

The Tempe City Council approved the changes at a Sept. 7 issue-review session.

Jones is optimistic about Tempe’s plan, hoping to see the cycling-friendly initiatives make their way to other parts of the city.

“I hope the additional traffic lane will ease some of the congestion, making things less dangerous,” he said.

“The next road to fix should be Southern, fingers crossed.”