A day of online classes from Kyrene Aprende Middle School done, Koa Peat dribbles a basketball on the sidewalk as he saunters across the street to his Chandler neighborhood park.

The 14-year-old moves with a balletic grace that makes it hard to believe he is 6 feet, 7 inches tall.

He speaks little as he glides across the concrete basketball court at Centennial Park. His mother, Jana Peat, admires her son from the sideline as he jukes an imaginary defender and rises up for a jump shot.

Indeed, Peat’s voice is barely audible over the jangling swish of the chain net. Perhaps that sound communicates everything the eighth-grade phenom wants to say.

Like many of basketball’s greats, Peat prefers to let his game do the talking. 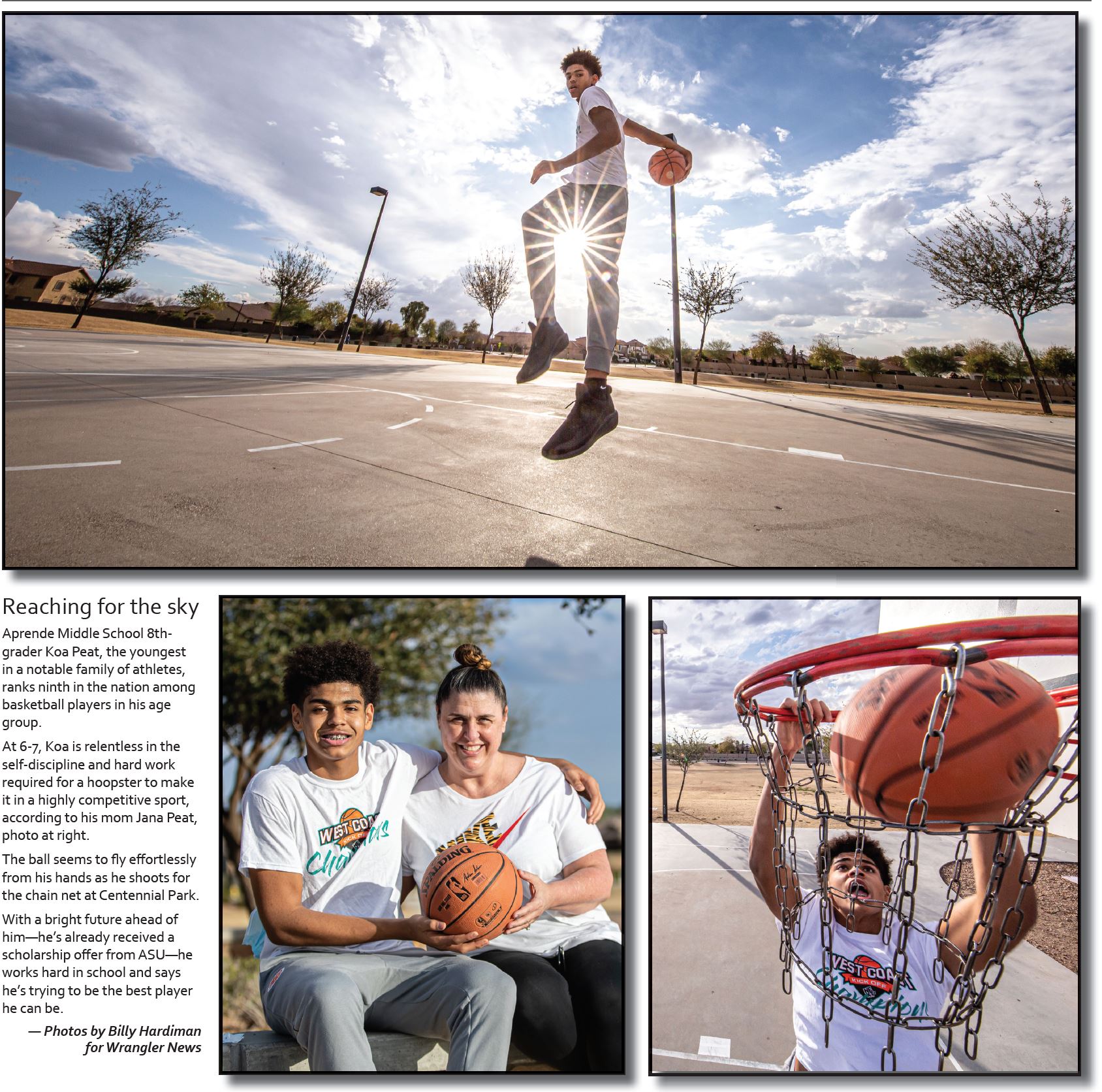 Talent like Peat’s truly does speak for itself. He is ranked ninth in the nation among basketball players in his age group. Already, he has drawn the attention of college scouts. Arizona State became the first to offer him a scholarship. He recently was scouted by an elite AAU team that is directly associated with LeBron James.

Peat, however, believes that his basketball success is more a product of hard work than of genetics. He approaches the game with discipline and maturity far beyond his years. He completes two workouts a day, one on his own and another guided by his brother and coach, Todd Peat Jr. They include drills to improve shooting, ball-handling, footwork and conditioning.

“I’d rather go through the hard work than go through losing,” Peat said, as he sinks another deep three-pointer.

Peat credits his competitive spirit in large part to his siblings. For as long as he can remember, he’s been playing sports against his brothers, a tradition that is ongoing. He believes that these usually playful fraternal contests helped forge his drive to be the best he can be.

“Yeah, they’re good,” he said, of his brothers’ basketball chops, “but I’m the best.”

Peat’s goal is to be an NBA player. In a perfect world, he’d be wearing a Suns uniform.

“I’d like to play for my hometown team,” he said.

Despite his lofty goals, Peat is careful not to neglect his responsibilities as a student. He boasts a 3.8 grade-point average at Aprende in Chandler.

Like most 14-year-old boys, Peat plays video games like Fortnite or NBA 2K and listens to Lil Baby. Yet, most eighth-graders are not asked to navigate a cacophony of national media, internet comments from strangers and interest from college scouts. Yet the soft-spoken young man manages all of the pressure, scrutiny and expectations before he sets foot on a high school campus.

“It’s nice. I don’t really let it get to my head,” he said. “I’m just humble about it. I just work every day to try to be the best player I can be.”

He understands that there will be praise and ridicule, cheers and boos. But that doesn’t concern him. Yet.

For now, he can’t hear any of that over the jangling swish of a chain net.