There’s an old joke about a patient who visits the doctor and says to him, “Doc, it hurts when I do this.” And the physician responds, “Don’t do that.”

Similarly, attempting to cure stupidity in today’s world can be a frustrating, eternal quest. If you let it.

So, don’t do that, advises a West Chandler man, who has made it his business to address perceived moronic behavior – and there seems to be no shortage of that in these politically charged, pandemic-stressed times.

Don’t judge. Don’t presume. Take a step back, draw a deep breath and try to see another point of view, Eric Bailey recommends.

And what is stupid, really? As we’ve seen in recent times, “stupid” is something about which people may disagree.

“Everyone at some point in their life will think of someone as an idiot or stupid,” Bailey said. “That sentence, ‘You’re an idiot,’ completely shuts down communication. It shuts down connection. If you need to find ways to reconnect with one another, putting that judgement out there between us is going to prevent us from actually connecting.”

Bailey, 38, and his wife, Jamie, 37, who live in the Ray Road/McClintock Drive area of West Chandler, operate Bailey Strategic Innovation Group, which has morphed into a consulting agency that does conferences and workshops for organizations, government entities, retreats, strategic planning and leadership development for more than 200 clients around the world. They deliver authentic takes on life by using brain science to address irrational behavior and drawing from their own relationship to help people improve theirs so they can have a civil conversation with those with whom they disagree, or vice versa. 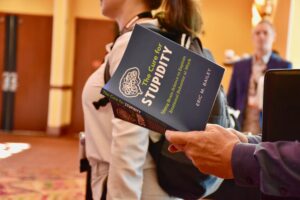 They do not do it by wearing shirts that proclaim, “I’m with stupid.”

Bailey is a voracious reader of psychological research. He has written a book, mirthfully titled The Cure for Stupidity, an exploration of real life in relationships and parenting. Together, they recently started a podcast, also named The Cure for Stupidity, which is available on Apple, Spotify and Google podcasts. Video versions are accessible on YouTube, Facebook, Instagram and LinkedIn.

They do not take individual appointments.

“It’s a lot of fun,” Bailey said. “One of the things we see a lot is how easy it is for people to see someone else as stupid or an idiot. We try to show people how to see beyond that and how to see the human on the other side.”

This is a guy who has helped likely NFL Hall-of-Famer Larry Fitzgerald pet a rhinoceros, taught dozens of young children to ski, changed the strategic course of cities across the country, jumped out of an airplane with his wife, flown an F-16 and chatted with LL Cool J on the campus of Harvard University.

Bailey’s experiences have taught him that no matter what life puts in your path, there are lessons to be learned or stories to be told. Among them is that “stupidity” comes from the natural tendency to judge another person, he said.

“All of this work is based in psychology and brain science,” said Bailey, who holds a master’s degree in Leadership and Organizational Development from Saint Louis University. “We try to help people realize that if they remove that natural tendency to judge, then those around us aren’t as quote-unquote stupid any longer, they’re just seeing the world from a different point of view.

“In everything that’s happening with politics and division, everyone tends to sit in place and point to the other side and say, ‘How are you this stupid?’ If we took the time to look at the other side and find the rationality of their position, all of a sudden, it’s, ‘Oh, you’re not stupid, you’re just seeing things in a way other than the way I see them.’”

According to Jaime Bailey, reflecting inward and seeing things from an alternate perspective is a good basis for finding common ground “as opposed to us vs. them.”

“In marriage, in friendships, with your parents, in the workplace with your manager or employees, it’s so easy to take an us-versus-them perspective as opposed to understanding and figuring out the best way together,” she said.

As Eric Bailey points out, it’s easy to say, “Don’t be judgmental,” but how do you get somebody to stop it?

“I encourage people to ask themselves: What do I truly want out of this?” he said. “Do I want to strengthen a relationship or do I want to win? Do I want to understand them better or am I trying to prove how smart I am? When you ask yourself that, it changes the way the brain functions, from a more animalistic fight-or-flight to a more human curiosity.

“Then, the follow-up question is: If that’s what you truly want, then how would you behave? If you want to strengthen a relationship, then you would show up differently in this conversation. You would stop trying to force your opinion and start trying to learn more.”

The most important question in these difficult conversations, Bailey said, is: Why are you so passionate about your position?

“That’s a very important question because, one, it acknowledges that we are on different positions but, two, it acknowledges strong emotion,” he said. “So, we’re not actually talking about why did you vote for this guy, but why are you so passionate about your position? It sort of gets at something underneath that is based on strong emotion.”

The COVID-19 pandemic also has influenced human behavior as a result of the stress, according to Bailey.

“Many are dealing with bouts of depression,” he said. “Uncertainty tends to do that. The same part of the brain is stimulated when we have uncertainty, when we face change, and when we experience physical pain. When you think about that, it makes sense why we are having such a hard time.”

There is trauma research called Toxic Positivity or Toxic Optimism, which suggests that if people always are looking for an optimistic outcome and then are frequently let down because it is not attained they can develop despair.

“Think how we entered this COVID time,” Bailey said. “Last February, we were all saying too bad for China. In March, we were saying, oh, too bad for New York and Seattle. That will never happen here. By late March, we were like, OK, we can shut down for a week. Then in April, we can shut down for a month. It’s just a month and then we can go back to normal.

“We kept pushing this finish line – to the end of May, then into July, then to now. Each time we missed it, many started to develop despair. You hear people say it will go back to normal soon. That starts to build this toxic optimism, where we’re continually let down when it doesn’t happen the way we hope it will.”

COVID-19 angst, uncivil political discourse and most issues within relationships can be dealt with effectively through understanding, Bailey said.

“I keep thinking about a scene in Apollo 13,” he said. “The ship is not going to reach the moon. Ground control is afraid we’re going to lose the astronauts. All of the people in Houston are sitting around a table trying to figure out how we are going to do this. How are we going to get a square peg in a round hole and save them?

“Then someone walks up and dumps a boxful of essentially garbage on the table and says, ‘This is what we have to work with. How are we going to get them home?’ That’s what I think 2020 was. We got a box of garbage dumped on us, and we’ve got to do our best with it.”

Does your business serve Tempe or West Chandler? Wrangler News/wranglernews.com advertisements get results! To purchase a print or online ad, dial 480-966-0837. Got a story idea or news tip? Give us a call at 480-966-0837.