An era ends with the loss of Hugh Downs; we’ll definitely miss him 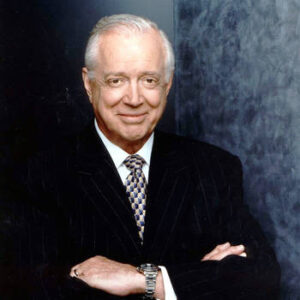 Even though he hailed from Ohio, over the last few decades Hugh Downs had become as much a fixture here in the Valley as Alice Cooper or Muhammed Ali. A resident of Scottsdale, Downs spent much of his retirement as a spokesman for hospice services and as the presenter for many public service announcements on television, to the point that we here in Arizona may feel his passing this past week, at the age of 99, more keenly than the rest of the country.

Most people probably think of Downs as a newsman, hosting NBC’s Today during the ‘60s and ABC’s 20/20 for more than twenty years during the ‘80s and ‘90s. But he really was more than a journalist; with his smooth voice and his mild, reassuring but authoritative manner, he was one of those guys that could be better defined simply as a broadcaster.

His career in television spans, essentially, the medium’s entire history, from the ‘40s on, with a few years in radio even before that. It includes a little bit of everything, from newsman to gameshow host to commercial pitchman. He even did a little acting, from radio shows to a 1960 episode of Riverboat with Darren McGavin to a newscaster in Oh God, Book II. He also played himself in the 2001 romantic comedy Someone Like You, and on an episode of the early-‘60s sitcom Car 54, Where Are You? H did a hilarious voice cameo, as a superhero version of himself, on The Family Guy.

The degree to which the career of Downs is interwoven with the iconic history of television is really quite remarkable: He was the announcer for Hawkins Falls, Population 6200 (1950-1955) n NBC, one of the true “soap operas” of early TV—it was literally sponsored by Surf Detergent. Also for the Peacock, he was the announcer for the sketch-comedy show Caesar’s Hour with Sid Caesar and for the celebrated puppet show Kukla, Fran and Ollie. Downs spent a decade as host of the gameshow Concentration, starting in 1958, and was a panelist for To Tell the Truth on CBS.

Perhaps most notably in that early phase of his career, Downs was announcer and sidekick to Jack Paar, in the Ed McMahon/Steve Higgins/Andy Richter mode, on The Tonight Show from 1957 to 1962. Then from 1962 to 1971, he hosted NBC’s The Today Show; from 1966 on he was often alongside Barbara Walters Downs. would later co-host 20/20 on ABC from 1978 to 1999 with the pioneering Walters. “Most of all, Hugh is such a good man,” Walters was quoted as saying. “And I loved working with him.”

Contrasting the more low-key style of Downs against her own hard-hitting approach, Walters noted that “His questions during interviews were gentler than mine, but he never restricted me from asking what I wanted. In short, he was one of the truest gentlemen I have ever known.”

Downs was a presence on PBS as well, hosting Over Easy (1977-1983), a show about aging, as well as Live from Lincoln Center during the ‘90s. And he served on the board of UNICEF, and he was a columnist for Science Digest and…

Well, it’s hard to imagine that we’ll see a career of similarly old-school eclecticism again. In short, Downs packed a lot into the century he lived.