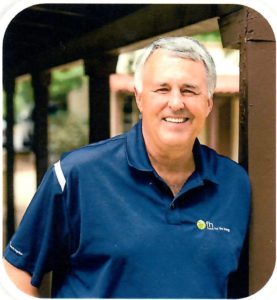 Gary was born Jan. 10, 1950 in Kalamazoo, Michigan as the oldest of four boys to Loren and Mary Jane Edmonds.

The family moved to Salem, Oregon in 1960. Gary graduated from South Salem High School in 1968 where he was student body president and athlete of the year receiving many honors in football, basketball and baseball.

He attended UCLA on a full football scholarship. Though injuries curtailed his role as quarterback of the team, Gary continued as an assistant coach for the Bruins and later for Antelope Valley College and Santa Monica College. He graduated from UCLA in 1972 with a degree in mathematics and social science. He later attended Fuller Seminary, University of Geneva, Switzerland and Regent College, with degrees in Missiology and Theology.

Gary met Tricia, the love of his life, while at UCLA and they were married in December of 1973. Six months later they moved to Europe where they would live for 18 years. Gary and Tricia have four children and seven grandchildren.

For over 45 years, Gary was involved in ministry as missionary, church- planter, pastor, and leader of Christian non-profits. He was well-known for his strong visionary leadership gift.

He always worked to build meaningful and effective partnerships between communities
of faith, business and government for the purpose of addressing issues of poverty and injustice around the world.

Most recently, Gary was President and CEO of Food for the Hungry International where he had also served on the Board of Directors for eight years.

Other roles held by Gary include: President and founder of Breakthrough Partners, Secretary General of the World Evangelical Alliance, President and European Director of Christian Associates International, Founder and Senior Pastor of Crossroads Church near Geneva, Switzerland and Executive Pastor of Mariners Church in Irvine, CA.

He and Tricia have been valuable members of Arizona Community Church for the last four years.