A close-knit neighborhood in South Tempe has rallied around one of its own in the wake of tragedy.

Craig Cottrell, 51, a Buena Vista Ranchos resident and a father of two, suffered a devastating hemorrhagic stroke July 13. Now facing a long recovery during which he must learn how to walk again as well use his left arm, he’s been unable to work since the stroke. His wife, Andrea, is employed part-time.

Without Craig’s income, the family has announced plans to sell their home and horses. Yardwork, understandably, has been the last thing on their mind.

That’s when the Buena Vista Ranchos neighborhood stepped in.

Doreen Garlid, president of the homeowners association, set up a GoFundMe account to help the Cottrells with medical expenses. She also organized a massive yard clean-up. Both efforts were promoted through social media, and when word leaked out that the Cottrells needed help, neighbors responded in a big way.

“This is one of those reasons you stand up and say, ‘I’m glad I live in this community,’” Garlid said. “Many of us have known each other for decades and our children grew up together here. We step up to help one another when one of us falls on hard times. We wanted to do what we could to help the Cottrell family because we know they would do the same.”

At sunrise, more than two dozen volunteers descended on the Cottrell residence, armed with rakes, chain saws and leaf blowers. They worked to cut up and remove a large tree that had fallen in the yard, trimmed bushes, raked and tidied up the yard, wiping sweat from their brows as the summer sun beat down.

Rose Jeffery has lived in the BVR neighborhood for 27 years but said she didn’t know the Cottrell family personally. That didn’t matter though, she said. “When one of our neighbors needs help, it usually gets to our association council,” Jeffery said. “Everybody knows that when you see something that needs help, you go to our association.”

The crew of volunteers worked hard to get the Cottrells’ property market-ready. “It makes you feel good to do something like this for a neighbor,” Jeffery said. “Everybody is here to work and very serious about getting it done.”

Most homeowners in the neighborhood have deep roots in the community. “When somebody moves in here, they usually stay a long time,” Jeffery said.

“Many of us raised our kids together and we’ve helped each other through the years. I can’t imagine living anywhere else.” 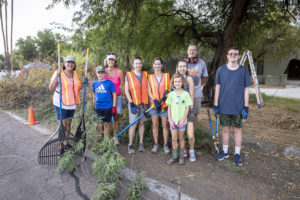 Members of Arizona Community Church were also on hand at the yard-clean-up event
to support the Cottrells. Lead Pastor Bill Meiter said it was an honor to lend assistance. The Cottrells have belonged to ACC for 16 years and “are a wonderful family that has been very generous with letting people use their house for pool parties, letting people ride their horses and much more,” Meiter said.

ACC hired a professional pool service to help take care of the Cottrells’ pool and will be paying the all the necessary fees for the family while they get back on their feet.

“It was the very least we could do,” Meiter said. “And the support won’t stop either. As a church we are here for them for the long haul.”

Some of the tools used in the clean-up were on loan from Phoenix Community Tool Bank, thanks to the efforts of the Tempe Police Association.

Sgt. Rob Ferarro, president of the police association, caught wind of the clean-up day
for the Cottrells while perusing social media. “It’s hard to get volunteers to show up and even harder to get them to bring tools,” Ferraro said.

“The least we could do is to try and help these community members be properly equipped.” The police association picked up the tab for the rental equipment.

At press time, $6,830 had been donated to the Cottrell’s GoFundMe account by 27 donors.Andrea Cottrell remains hopeful in spite of the family’s hardship. 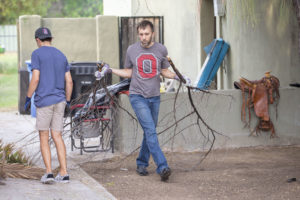 “The doctors believe his leg will come back first and he does have some nerve awakening there. His arm will take longer. It will take a year to fully recover,” Andrea said. “Until then, he must do thousands of repetitions of therapy exercises to help the brain re-map communication to his left side.” Nevertheless, her husband is in good spirits, she added.

“He is so thankful for the support of the BVR neighbors, our community along with our church family from Arizona Community Church, has shown to his wife and kids. He works hard every day [on his recovery] for them.”

Garlid said all the support the Cottrell family is receiving serves as a reminder of the positive things happening in the community.

“I believe the time to love your neighbor is now,” Garlid said. “With all of the sadness and negativity in the world today, people need to realize that there still really are good things happening out there.

“Even if it’s just one little act of kindness, in one neighborhood for one family, it all matters. That’s why we do this.”

Joyce Coronel
Joyce Coronel has been interviewing and writing stories since she was 12, and she’s got the scrapbooks to prove it. The mother of five grown sons and native of Arizona is passionate about local news and has been involved in media since 2002, coming aboard at Wrangler News in 2015. Joyce believes strongly that newspapers are a lifeline to an informed public and a means by which neighbors can build a sense of community—vitally important in today’s complex world.
Previous articleWATCH: Who we are, who we aren’t, and where we’re headed
Next articleIn Memoriam: Gary Loren Edmonds