VooDoo Daddy’s is back—or maybe it would be more accurate to say it’s here for the first time, and potentially better than ever. Confused? No need to be. Tempe and Chandler foodies may remember a purveyor of Cajun and creole specialties called Voodoo Daddy’s Magic Kitchen and Bar at Warner and McClintock in Tempe. Ron Lynch certainly does.

“It closed about 13 years ago,” says Lynch. “I was a regular customer of that one.”

The Oklahoma native and University of Oklahoma graduate is a longtime veteran of the restaurant business. In the early 2000s, Lynch was in charge of the Schlotzsky’s Deli chain here in the Valley. But when it came time for him to go to lunch himself, he often looked elsewhere. 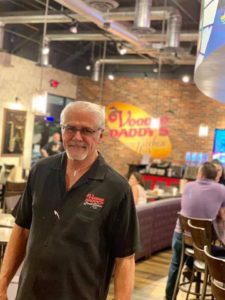 “My dad was a fan of red beans and rice, so he’d come around and we’d go together to lunch at Voodoo Daddy’s,” Lynch recalls. “I always liked the name.”

So Lynch, who was also president of the Tilted Kilt chain and headed the venerable Tempe Diablos community service organization, paid tribute to his old favorite in the name of his latest project, VooDoo Daddy’s Steam Kitchen.

The new place, describing itself as featuring fast-casual Cajun, creole and Caribbean, opened in mid-May in the Costco Plaza on Elliot, between Priest and Hardy in Tempe.

As such, Lynch’s new place carries on the tradition of offering enticing Louisiana-style cooking, but with a few twists. The major development is right there in the new name: Steam.

“What makes us a little different,” explains Lynch, “is that we use steam kettles. That allows us to make each order for each individual customer, and still make it fast.”

Lynch knows that many diners— like me—enjoy the flavors of Cajun and similar dishes, but often find the spice level a little hard on our guts.

“A lot of people shy away from Cajun and creole because it has that reputation,” he admits. He believes they will find the new VooDoo Daddy’s take on the cuisine more agreeable.

Lynch also hopes that, along with the gumbo and jambalaya, etouffee, po’boys and shrimp and grits—and, of course, his father’s favorite red beans and rice—visitors will be drawn in by the elegant New Orleans inspired atmosphere.

Asked if he sees VooDoo Daddy’s Steam Kitchen as yet another candidate for eventual chain restaurant status, Lynch isn’t coy.

“I hope to expand it,” he says, “like I did with Schlotzsky’s and Tilted Kilt. It’s kind of what I do. But for now, one restaurant is enough.”