Students at Kyrene de la Mariposa Elementary School are now one step closer to the opportunities awaiting them in an increasingly digital future.

These recently honed digital skills are due, in part, to a progressive new curriculum with hands-on opportunities to learn, according to Principal Spencer Fallgatter, who has helped guide the school to its transformation as a Computer Science Academy, where students grades K-5 get full immersion into technology in every classroom.

With the implementation, kids are now able to gain computer science and coding skills—not to become more than just users of technology but critical thinkers, as well.

“We want our students to learn how to solve problems and to develop transferable skills to use across all subject areas and in any future career path,” said Fallgatter.

“When they acquire the basics of using coding, they can create solutions and they will have the knowledge and experience to become leaders and innovators of the future.”

During a recent presentation to the Kyrene Governing Board, Fallgatter explained how his staff used $30,000 in what is known as Results Based Funding, which was awarded to the school based on its performance on standardized testing during the 2017 school year.

The funds allowed the school to expand upon its work, which was already in progress, to pilot a coding and computer science program during the 2018-19 school year.

The success of the program was acknowledged by Superintendent Dr. Jan Vesely, who said she expects the computer immersion initiative at Mariposa can be duplicated as a best practice at other schools across the district.

Fallgatter explained that receiving the extra funds allowed 15 Mariposa teachers to be paid for work last summer, during which they spent a collective 880 hours to design and create coding lessons and integrated science projects.

The students’ lessons also may use content and standards from language arts and mathematics to broaden their learning opportunities.

“By the beginning of the school year, teachers had created new instructional study guides that involve lesson plans in coding projects. Each learning unit is a project, which is integrated into the appropriate grade- level science and social-studies topics.”

To help the kids absorb the technology lessons, Fallgatter says the school has invested in new devices.

“Our K-2 classrooms each received 12-15 iPads, in addition to their classroom laptops to utilize a program called Scratch Jr., which teaches and strengthens coding skills. Third-grade classes received additional laptops, so they have half a class set each, and by sharing with a buddy class it creates a whole class set.

And, he noted, fourth- and fifth-grade classes are one-to-one with laptops to encourage greater integration and accessibility. Classes have weekly time reserved in one
of two computer labs with desktop machines, and teachers may sign up for additional time, as needed, to support student learning.

Additionally, Mariposa has a part- time computer-science specialist to support the full implementation of the immersion program and to provide both professional and curriculum development opportunities for staff.

In addition to K-5 grades, Mariposa offers a pre-school program with “unplugged lessons”—those not using a technology device—to introduce pre-foundational concepts of computer science to the pre-school students through games and vocabulary exercises.

Fallgatter says the enthusiasm, support and feedback from parents, students, teachers, administrators and the community have been exceedingly positive.

“Students are highly engaged in class and enjoy the content, as well as honing a skill-set, which is vital to a successful future regardless of whether they choose to pursue a career in computer science or not,” he said. 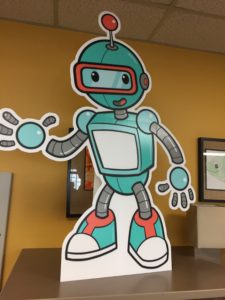 As a sign of the whole school being enrolled in the computer immersion concept, on Dec. 3 students voted on and named a new school mascot, Chip the Challenger, an homage to computer chips and the failed spacecraft that crashed in 1986, just a year before Mariposa was built.

To move the computer immersion forward, Fallgatter said he expects that teachers will develop new teaching units for the next school year. His staff is also exploring additional ways to partner with different community members for assistance.

“Intel is interested in partnering with us to find meaningful volunteer opportunities for their employees, who want to help with student projects and learning,” said Fallgatter.

“We are working to build an educational pathway for our students, so they can continue their computer science studies in Kyrene middle schools and Tempe Union high schools, along with other school districts in the East Valley STEM Alliance.”

Fallgatter says he applauds the efforts of his staff and teachers as the school adopted the computer immersion program in just a short time.

“I am very proud of the work we’ve accomplished in just one year and expect to create new opportunities for our students to flourish at Mariposa.”