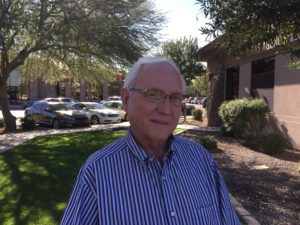 If you’ve had some sleepless nights lately agonizing over what to give me for Christmas, go back to bed and worry no more. I have all the gifts I need.

Actually, this has been the case for the past several years, and I should have mentioned it before this year’s season of gift-giving was upon us.

I’m sure there are lots of guys who realize they don’t need any more socks, ties, auto-repair gadgets or souvenir key fobs from Mt. Rushmore. In my case, it’s not because I have all those things, or too many of them.

It’s because my gifts have been piling up in the form of dedicated, deeply committed— did I mention talented? — young people who have joined us in the last few years while they work toward their college degrees.

Researching what, if anything, I had reported previously about this ongoing bit of good fortune (I have a

bad habit of writing some of the same stuff over again), I came across a column from 2014 recalling some of the college students I considered among our most memorable.

That dig through old copies of Wrangler News unearthed quite a few names, some of which
went back as far as the late 1980s when I took on what was to be a temporary assignment editing the monthly newspaper for a local homeowners association.

While that particular job didn’t require much
of an in-house workforce, it wasn’t long before we had started publishing eight other newspapers, and the knocks on my office door began to come more frequently.

Although I’m still not sure what aspiring writers and photographers thought they might gain from experience at such an outfit as mine, I began to
take seriously what I saw as an obligation to mentor those young people who showed an unwavering resolve to be top performers in their chosen careers.

Now, as we approach our 31st year, comes the realization that many of those same young people, and quite a list of others, have either achieved success or are at its threshold.

If their accomplishments can be attributed even partly to the time they spent with us, that’s perhaps the happiest news I can imagine receiving during this Christmas season.

A gift, you might call it, and the pile of them seems to grow larger every year.