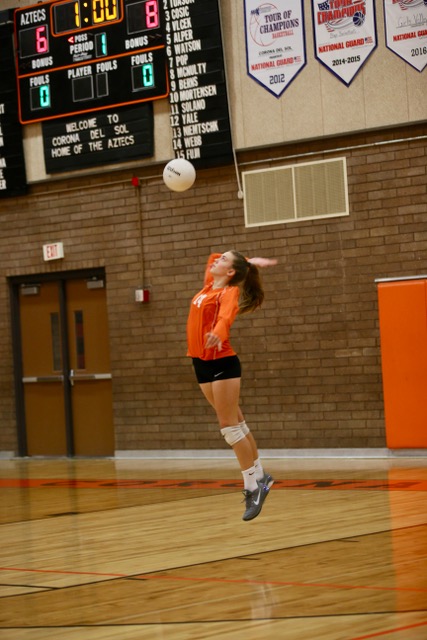 After winning the 6A Championship in 2016 and finishing runner-up last season to Xavier, Corona’s girls volleyball team, with three returning starters and only five returning players in total, should probably be in the throes of rebuilding but don’t count the Aztecs out of contention just yet.

The Aztecs started out as a relatively young and inexperienced team, after losing 18 players to graduation over the past two seasons.

One of those lost volleyball stars included the prominent outside hitter Brooke Nuneviller, who led the team in kills, with an average of five kills a set along with 4.2 digs a set during her senior season.

“Mady Noble is a tremendous leader, both on and off the court,” said Maxfield. “She is a hard worker who, at the same time, plays in a very calm manner during matches. She can keep everyone relaxed when things get crazy.”

Noble is probably the most experienced player on the team, having been part of Corona’s championship win two seasons ago as a freshman, playing in 96 sets with 82 kills.

This season Noble has played in all 52 sets to date, leading the team in kills with 153, or close to three kills a set, and is second on the team in digs with 158. She has five solo blocks and 15 assisted blocks plus 11 service aces.

To say Morse leads the team in digs is an understatement. In the first 52 sets this season, she had 426 digs, or an average of 8.2 a set. Morse also had 15 service aces.

“Becca’s ability to pass the ball and solid defense will allow us to extend a lot of rallies,” said Maxfield. “She will give us a chance to be in the match with a lot of teams.”

McRae is the leading blocker on the team with seven solo blocks and 30 assisted blocks for a total of 37, as well as 57 kills in 49 sets.

“Sadie McRae has developed a lot as a volleyball player in the last year,” said Maxfield. “She is hitting the ball harder. I expect she will get us more offensive points from her hitting this season.”

“Last year Kacie was our serving specialist and is continuing this season as one of our best servers,” said Maxfield. “She has a very tough serve that knocks the other team out of system a lot of the time. She is also doing a great job leading the girls as a captain.”

McCain has played in all 52 sets and is leading the team in aces with 22, while Sounart has played in 31 sets and has 33 kills or just over one kill a set on average, with 14 block assists after coming back from an elbow injury.

“Kaiessa Sounart is very versatile and can play any position in the front row,” said Maxfield. “She just returned from a dislocated elbow injury she sustained over the summer, but she played beach volleyball with us in the spring and I’ve seen a huge improvement in her ball control and shot placement.”

“Nicole Newlin was our leading attacker on JV last season,” said Maxfield. “She has made a tremendous impact already this season. She hits a very heavy ball and her athleticism makes up for her medium height. Overall, she brings us more fire power than we had last year.”

Newlin had no problem getting up to speed on the varsity team, with 152 kills in 49 sets, just one less than the kill leader on the team, Nobel. She is also second on the team in service aces with 17, third in digs with 100 and third in total blocks with five solo blocks and 16 block assists. Babic is averaging 8.4 assists a set for a total of 361 assists in 43 sets in addition to 68 digs, 16 aces and 12 total blocks.

“We have put a lot of pressure on Anita Babic, as a freshman, running our court but she is doing an excellent job,” said Maxfield. “She has a huge upside, and with hard work has a very bright future ahead of her on the court.”

Babic’s freshman teammate, Natalie Meyer, has played in 42 of the 52 possible sets, averaging 1.5 kills a set and close to a block a set. Meyer has six solo and 29 block assists, second only to McRae.

“Natalie Meyer continues to improve every time she steps on the court,” said Maxfield “She is a hard worker who hits a heavy ball. I expect she will be a high-impact player by the time she finishes her high school career.”

The Aztecs also got a boost of experience and production from four transfer players who were eligible to play at the Westwood Tournament of Champions starting Sept. 14.

Probably the most notable transfer player may be senior outside hitter Mary Shrollfrom Tempe Prep, who was chosen as part of the 2018 MaxPreps All-American volleyball team.

Shroll was the 2017 2A Athlete of the Year when she led the state in kills (663) and kill percentage (.510). She had 7.8 kills per set which was almost two kills per set higher than the next player (most likely they mean Nuneviller, who averaged five kills per set).

Shroll, who has committed to Loyola Marymount, averaged 4.7 digs and 6.1 serve receptions per set last season but until recently was not able to play at Corona.

Looking for another run at a state championship, Shroll may be able to help the Aztecs replace Nuneviller’s offensive and defensive skills set now that she can get on the court.

“I don’t think you can ever completely replace Brooke, but Mary Shroll brings a lot of the same attributes to the court,” said Maxfield. “Mary passes very well and is tremendous in defense. She will add enthusiasm, leadership, competitiveness, and should score a lot of points for us both offensively and defensively.”

Shroll, playing at the Westwood Tournament of Champions, it appears has already had an impact. She registered 70 kills in only 18 sets or 3.9 kills a set hitting .261. In addition, Shroll served four aces, had three solo and six assisted blocks and got up 86 digs or 4.8 digs a set.

The other three transfers able to play for the Aztecs, as of Sept. 14, are senior middle blocker Jenna Bolenaand junior setter Ashley Hayden, both from Desert Vista, and junior setter McKenna Olsenfrom Mesquite.

“Jenna Bolena brings a lot of experience and enthusiasm to the court,” said Maxfield. “We are continuing to work on her power game but on defense she reads our opponents offense well and is a good blocker.”

Hayden played in 17 sets over the weekend tournament amassing 107 assists or 6.3 assists per set, 31 digs and 12 aces.

“Ashley Hayden does a great job setting a hittable ball,” said Maxfield. “Her consistency and experience will take us to a new level.”

Olson was on the court in 10 sets during the Westwood tournament, where she was credited with 32 assists, 9 digs and 6 aces.

“McKenna Olsen brings a tremendous amount of energy to the court,” said Maxfield. “She sets a consistent ball and is tenacious on defense.”

McNulty has played in nine sets where she is credited with six kills and three blocks while Mertes has seen action in 27 sets earning 11 kills, 19 digs and 2 aces.

Playing in the Westwood Tournament of Champions, Corona defeated five straight teams in pool play on Friday, Sept. 14, and the next day (Dobson, Gilbert, Westwood, Mountain View and Notre Dame Prep) before losing to Basha 19-25, 28-26, 15-11).

Corona advanced into the gold bracket for single-elimination bracket play, where they defeated Mountain Ridge, 2-0 in the first round. The Aztecs were eliminated in the semifinals to Hamilton, 2-0. Hamilton then advanced to lose to Perry in the finals.

Corona’s Morse was chosen to the all-tournament team which consisted of 12 players, one from each of the 12 teams that qualified for the Gold Bracket final play.

With more than half the season over, the Aztecs have eight regular season games and two tournaments left to get everyone playing together before they make a state tournament run in late October and early November. Corona was due to host Hamilton at home on Sept. 19 before playing in the 10th Annual Nike Tournament of Champions at the Salvation Army KROC Center in Phoenix on Sept. 21 and 22.

This tournament was designed to showcase 96 of the most elite high school girls volleyball teams in the United States, with competition divided into three, 32-team divisions, with each team playing in seven matches over the two days.

Cross Country— Corona and McClintock competed in the Chandler Invitational Sept. 1. The meet was divided in four classes each for both boys and for girls based on grade level. The freshman boys started at 7:35 a.m. with the freshman girls starting 60 seconds later and so on with sophomores, juniors and seniors.

Corona’s freshman boys had two runners finish in the top 35 withDiego Diazcoming in sixth and Callum Rohrerfinishing in 20th place.

The other four racers were Christopher Ortiz, Gian Martinez, Ashton Flanaganand Miles Prince. The team finished fifth out of 16 schools racing against 93 racers.

Corona’s sophomore boys did not have any runners finish in the top 35 but did have three runners race, including Ethan Abeytafinishing in 36th place, Jacob Cheshirein 50th and Caden Agnewfinished 112th out of 138 runners from 25 schools who participated.

The senior runners from Corona, led by Joel Wadsworth,who crossed the finish line in second place with a time of 16:26.6, finished in third place behind Page and Brophy.

The second senior Aztec runner, Kyle Swindler, finished in the top 35 with a time of 17:42.9 for 11th place while Logan Bridgewas 41st, Matt Montana, 48th, and Jase Bronsonfinished in 64th place out of 109 racers from 32 schools.

Corona’s freshman girls took first place with only 18 points due to an outstanding first place finish by Isabella Marcelesand a second place by Lauren Montana. Ashlinn Aguayocame in 17th and Sachiko Devineplaced 24th out of 78 racers from 18 high schools.

Corona had only three girls able to run in the junior class race. Emily Ruggwas the top finisher, taking 12th place while Emily Wardwas 43rd and Taylor Nicholswas 64th out of 71 junior runners.

McClintock’s girls team had six athletes run and the boys team had seven racers compete at the Chandler Invitational on Sept. 1.

The Chargers’ top finisher among the girls was sophomore Ella Zeiderswho finished in 8th place with a time of 22.17.1. Zeiders, along with Rachael Pabst, who was 29th and Amanda McAlphin, who finished 37th, earned a fifth-place team finish with a score of 64 points in the sophomore class.

Both Zeiders and Pabst should have received medals for finishing in the top 35 in their sophomore class.

McClintock’s second highest placement was junior Mariska Bogarrdwho finished in 10th place with a time of 22:53.2. Yodit Weldeselassiealso ran in the junior class for McClintock. Bogarrd should have receive a medal for her effort in the junior race.

Senior Emilie Berthiaumeran in the senior division finishing in 37th place out of 58 mostly DI runners.

The top finisher for the Chargers’ boys team was junior Aiden Penry, with a time of 18:33 to finish in 28th place. Penry was the only athlete who received a medal from the boys team for placing in the top 35 in the junior class.

McClintock had three runners in the sophomore race, with Cesar Rebollofinishing in 39th place with a time of 20:12.2 while Carter Millerand Miguel Inzunzaboth finished the 5,000-meter race for the Chargers.

Richard Kauschewas the lone senior who ran for McClintock, finishing in 51st place out of 109 racers while the freshman class was represented by Benjamin Kausche,who finished 63rd, and Nathan Gelfi, who was 76th, out of 93 runners.