Mary Forrester was in anything but a celebratory mood shortly before her 70th birthday last January. COVID-19’s latest variant had worsened an already unstable housing situation for Forrester, whose fixed income was insufficient to cover her bills.
Alone and on the cusp of running out of money and losing the roof over her head, Forrester called Arizona’s 211 help line and learned about the city of Tempe’s HOPE — Homeless Outreach Prevention Effort.

“When you think of being homeless, you are out there, you might starve or someone might try to hurt you,” said the Philadelphia native who moved to Arizona 13 years ago.
“If I was 30, maybe I would have felt a little stronger, but I wasn’t sure what was going to happen to me. I felt like I wasn’t going to make it at my age.”

When the city’s HOPE team contacted Forrester almost immediately, and told her they could help, she was filled with hope of her own.

She is among hundreds of people experiencing homelessness who have been helped this year by Tempe’s Homeless Solutions.

“You are drowning, and all of a sudden, there’s a life jacket,” she said. “They treated me with kindness, with respect and dignity, they didn’t look down on me. And in less than a day, they had me. I was in the hands of HOPE.”

Two days before Forrester’s birthday, the team helped her move into a clean, natural light-filled, one-bedroom apartment near Arizona State University. It was modestly furnished with a twin bed and a large sectional, and it left her speechless.

For more than 20 years, Tempe has had formal programs to address homelessness and help individuals and families ensnared in it.

But homelessness is on the rise across the U.S., and Tempe is no exception, according to the point-in-time count, a, single-night, unduplicated tabulation of people in a community experiencing homelessness, both sheltered and unsheltered.

Tempe’s January 2022 count was 383, a number that rose to 515 in June. The city attributes the increase to HOPE staff efforts to locate more individuals needing help, with 6,800 reported HOPE engagements since last April alone. 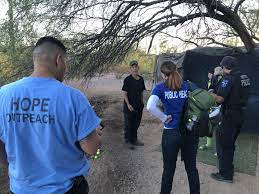 The CARE & HOPE line, which residents may call 24/7 to report people needing help, whether in crisis, homeless or having other issues. The number is 480-350-8004. Or email HOPE@tempe.gov.

“Even though our HOPE and CARE 7 teams are out in the community every day engaging with people, there will always be people we’ll never know about who might be struggling,” said Kris Scharlau, Human Services manager who oversees the teams.

The CARE and HOPE line “is a resource that anyone can call to tell us about someone who needs help, like Mary when she lost her home,” Scharlau said.

“It’s also the number people can call when they need help for themselves.”

An online encampment reporting form, previously used only by city staff to gather information about numbers of people, locations, possible hazards and other data regarding encampments, now is available to community members. Find the form on the Tempe 311 app or by visiting tempe.gov/311.

The HOPE team visits these reported encampments, assesses needs there and offers resources for housing and other services to individuals.

An enhanced encampment response was developed with some of the city’s nonprofit partners to prioritize safety and public health in parks, vacant lots and other places in Tempe.

For example, a temporary “resource village” was open for two weeks in August in the Salt River area near Tempe Town Lake.
A variety of assistance — from pet care and storage of belongings to identification card replacement and immediate shelter — was provided, as were medical care and mental health resources.

However, remaining in no-trespass areas such as the river bottom isn’t an option because of flooding, fire and other public health risks, city officials say. Individuals in these areas were notified that they could be cited or arrested for trespassing after Aug. 31.

Now through through December, the city will dispose of debris and hazardous material and address overgrown vegetation.
After this, the city will continue vegetation maintenance and monitoring the area to keep encampments from returning.

Finally, a homeless solutions dashboard was created to enable residents to view the city’s work with those experiencing homelessness and in addressing encampments.

It shows current information about reported encampments, progress in addressing them and other data, and can be found at homeless.solutions@ tempe.gov

Forrester had long ago lost her birth certificate and Social Security cards, but the HOPE team was able to help her replace both.

The city obtained a housing voucher for her, which helps offset her rent, and also paid her security deposit.

Today, she is getting to know the city better, riding the bus to visit the Tempe History Museum or to play bingo at Pyle Adult Recreation Center. She is meeting and greeting her neighbors, including ASU students about whom Forrester says, “I might remind them of their grandma.”

Her apartment is dotted with houseplants and other special touches, a small altar with a Bible and wooden cross, a blue “home sweet home” cup and her crocheting, taken up after 40 years of dormancy.

“I do wonder what would have happened if I didn’t have HOPE,” Forrester says.

“I’m grateful to God. He put Tempe in my life, and without them, I honestly don’t think I would have survived.”