The Jolly Green Trolley is ready to roll.

After nearly a decade of debate over its cost and route, 3-plus years of disruption to businesses and traffic during installation of its rails followed by months of testing along the line, the Tempe Streetcar will make its debut on May 20, and riders get a free ride on the green-and-silver beast during its opening year.

The long-awaited, nearly $200 million, 3-mile-long system is intended to create a more-connected downtown. 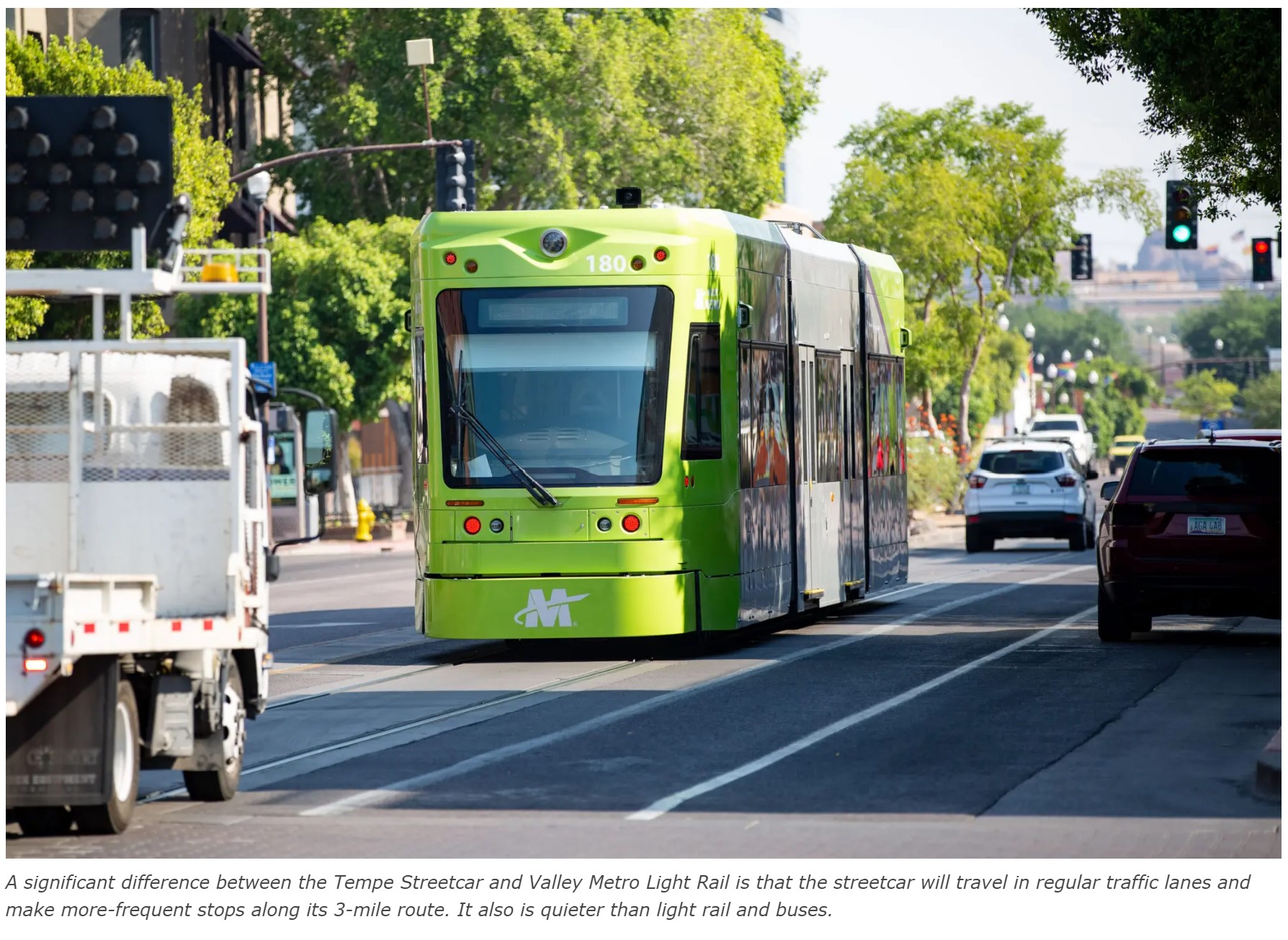 The route features 14 sheltered stops — more like bus stops than those of light rail in that they are more frequent than light-rail stops — with unique public art and landscaping that are Americans with Disabilities Act-compliant and accessible by bicycle. There are two connections along the line to light rail.

It won’t be a free ride after the first year.

“We will have a fare system in place but we’re still kind of determining what that is going to be,” said Madeline Phipps of Valley Metro.

With its frequent stops, the streetcar is more like a bus than like light rail, the fundamental difference being that the streetcar shares lanes with street traffic rather than having a dedicated lane.

That created challenges designing a system to operate on downtown Tempe streets shared with congested vehicular and pedestrian traffic while powered in stretches by hybrid technology. 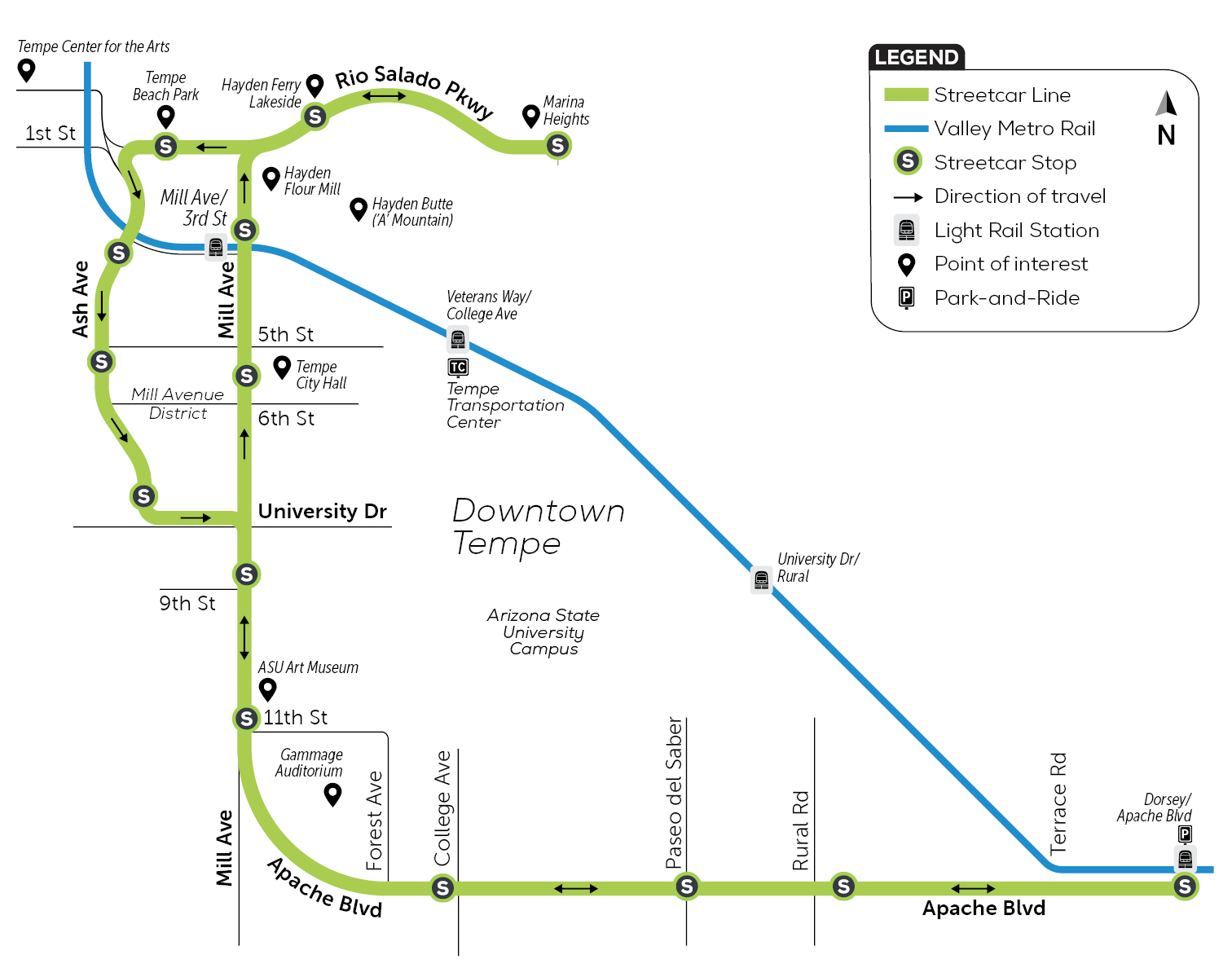 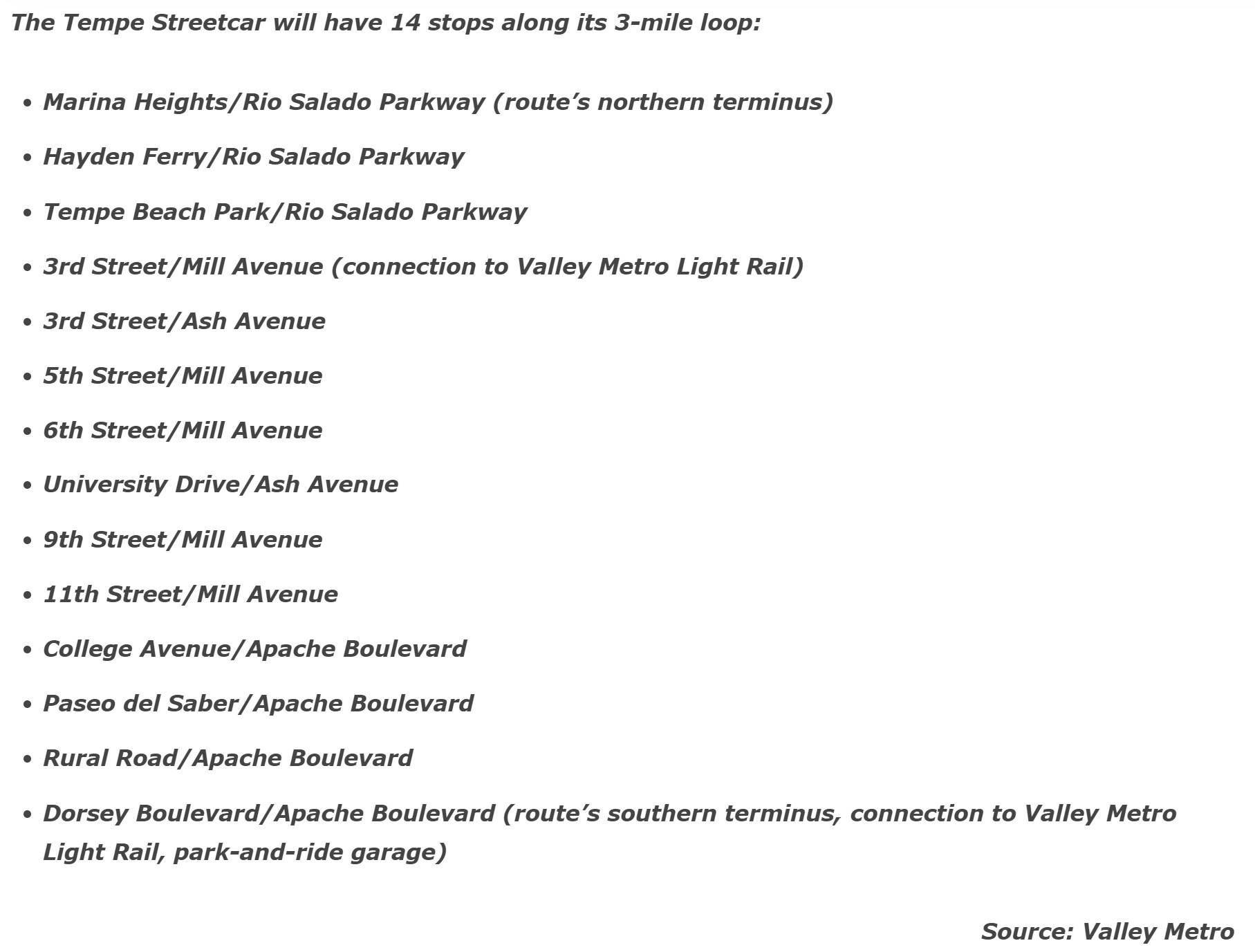 “Obviously, it’s a new mode of transit for Valley residents, and the fact that it shares traffic lanes with cars is a new thing,” Phipps said. “It’s safe to drive in the same lane, for the most part, but drivers should follow the signage and keep back a safe distance. Treat it like any other vehicle. The streetcar will obey the same traffic signals as all traffic. The operator will stop at red lights. It will do the same things that cars do.”

Valley Metro advises those who ride bikes and scooters to not ride between the rails because it is difficult to maneuver in the tight space and their tires could get stuck in the track’s grooves.

It also emphasizes that pedestrians cross streetcar tracks only at designated crosswalks. The streetcars are quiet – much quieter than the light rail – so pedestrians must be aware of surroundings and the signals.

Valley Metro purchased six vehicles from Pennsylvania-based Brookville, the only maker of streetcars designed and manufactured exclusively in the U.S., on a $33 million contract awarded in 2017.

Four vehicles will be on the system at a time running at 15- to 20-minute intervals. Each has 40 seats. With standing room, a streetcar can transport roughly 120 people along the short-hop line.

HOW TEMPE STREETCAR WAS FUNDED 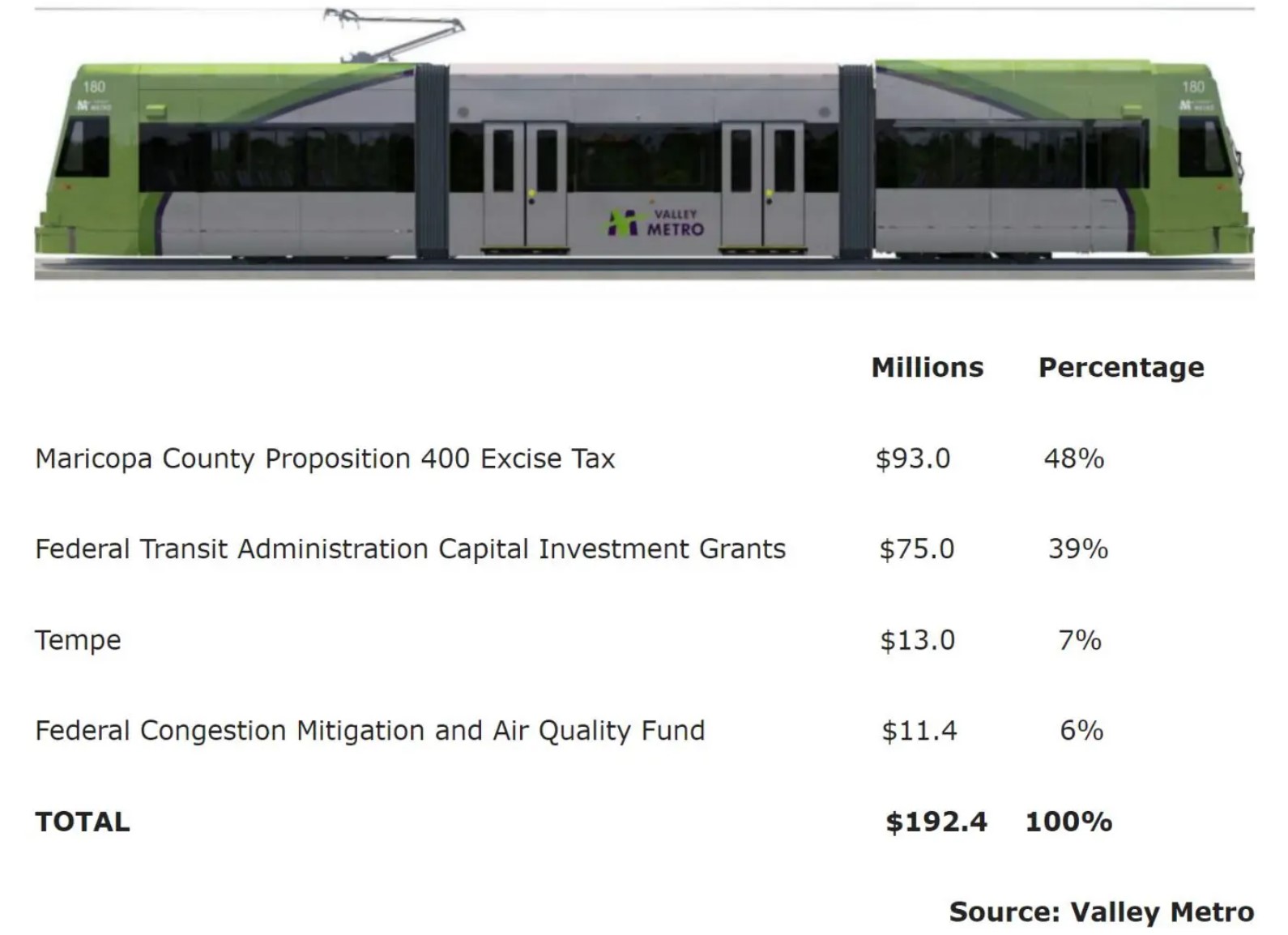 The cost, to be paid with a mix of federal, regional and local funds, has been controversial from the start. Tempe also will pay the estimated annual operating and maintenance cost of $3.1 million. Some critics suggested that it would be less expensive to add buses that run on compressed natural gas.

Tempe, which has the most densely populated downtown among Valley suburbs, with its high-rise residential structures and the Arizona State University campus just off Mill Avenue, has been proactive in creating multimodal transportation, hoping to get as many automobiles as possible off its crowded downtown streets. 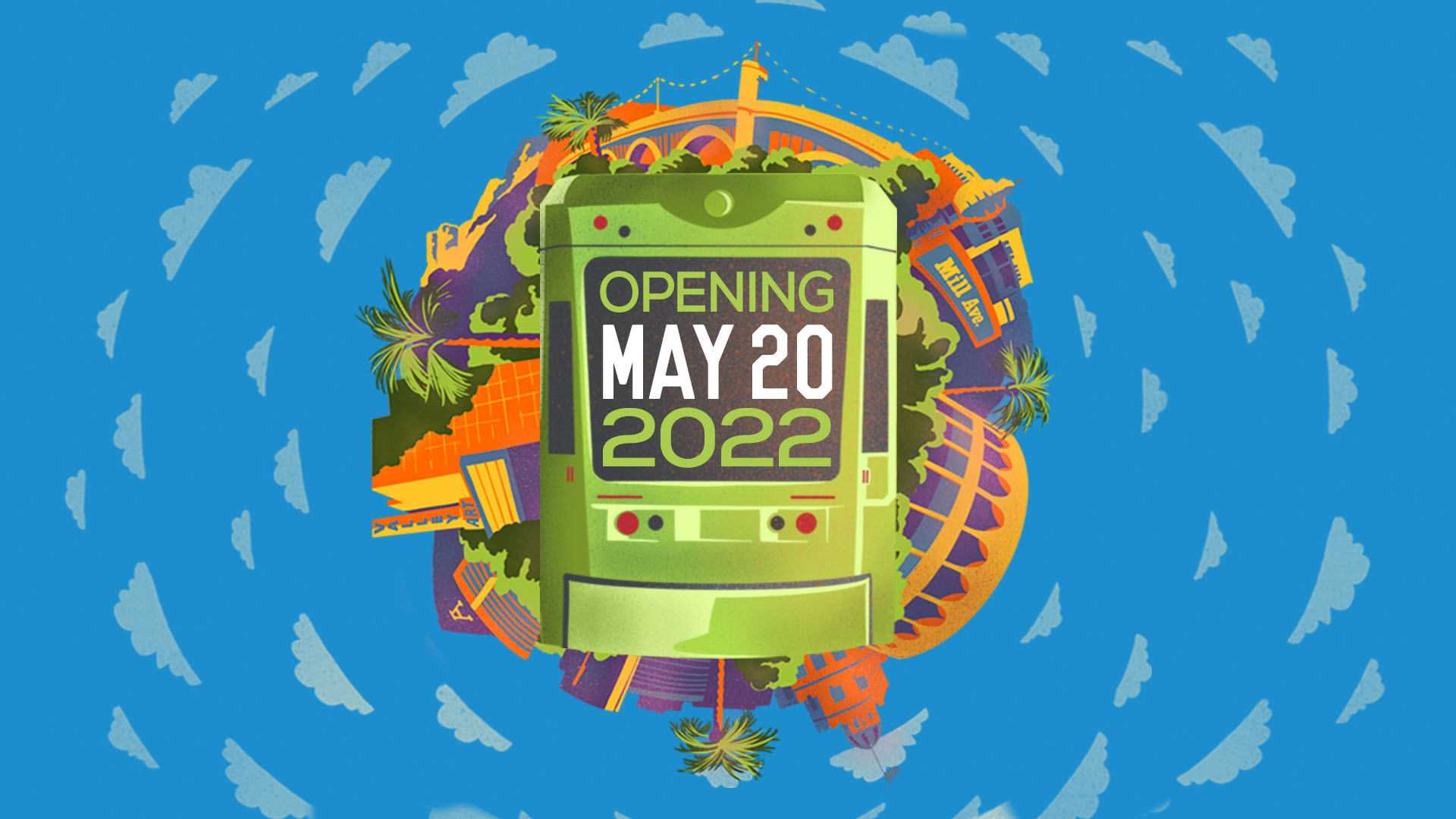 Before the first passenger steps aboard, discussions are taking place about expansion of the streetcar line to possibly include stops at Tempe Marketplace, and into Mesa at Sloan Park, Riverview Park, Mesa Asian District and Mesa Community College.

Streetcar rails are the same gauge as those of light rail so streetcar vehicles can travel on the light-rail track. In fact, every night, the streetcars will switch over onto the light-rail track and travel to the maintenance center at 30th Street and Washington to be serviced.

Lee Shappell
Lee Shappell became a journalist because he didn’t become a rocket scientist! He exhausted the math courses available by his junior year in high school and earned early admission to Rice University, intending to take advantage of its relationship with the Johnson Space Center and become an aerospace engineer. But as a high school senior, needing a class to be eligible for sports with no more math available, he took student newspaper as a credit and was hooked. He studied journalism at the UofA and has been senior reporter, copy desk chief and managing editor at several Valley publications.
Previous articleEvacuation lifted in West Chandler near building where lithium-ion battery fire has smoldered
Next articleGrab a blanket: Tempe and Chandler outdoor free movie series return on May 6 at dusk