Tempe is aiming to lead the state in bike safety at a time when it is making a strong push toward alternative modes of transportation.

Over the last two decades, the city has dedicated millions of dollars to bike infrastructure and added more than 200 miles of bike lanes and paths.

The funding comes from a half-cent sales tax authorized in 1996—roughly $45 million per year—earmarked as a dedicated transit tax that is used for transportation and streetscapes.

TaiAnna Yee, public information officer for Tempe, said the city has bike lanes or paths on nearly every street and is working on improving and adding more with future projects.

“As we go into designing roads or updating any construction projects, we try to do it with bicyclists in mind because streets aren’t just for cars,” Yee said. “We have pedestrians, scooter users and skateboarders that also share the road.”

With so many types of users, maintaining safety for all on the road is key.

“Our goal is to make sure that we have the infrastructure for all of these other different users and not just a focus on vehicles,” Yee said.

According to The League of American Bicyclists, a national organization that pushes for safer roads and stronger communities for cyclists in America, Arizona ranks 23rd among U.S. states for being bicyclist friendly.

The city and ASU are ranked gold level, the second-highest category.

The league takes into account a city’s bike-safety programs, its infrastructure and laws to protect cyclists. 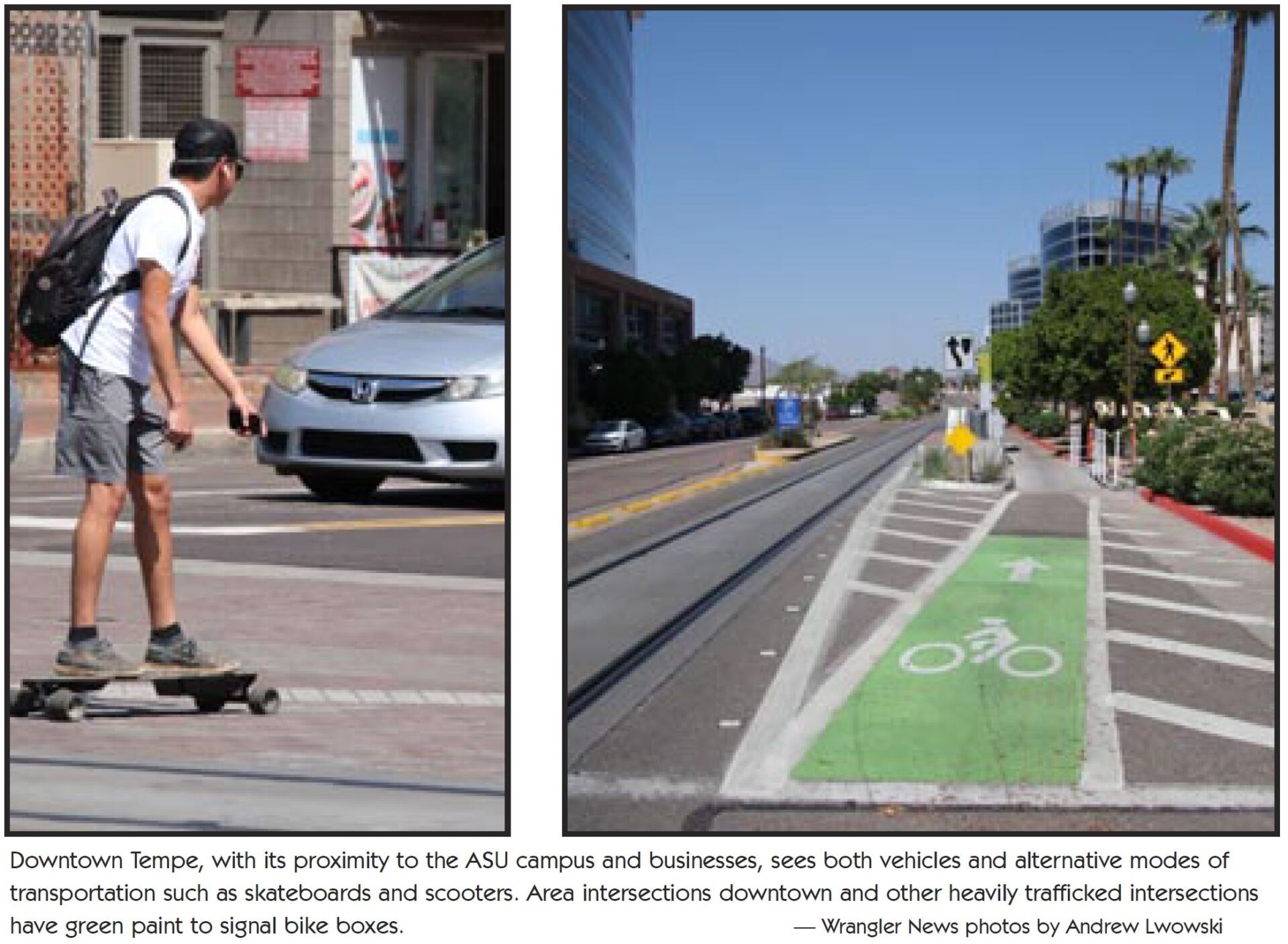 Downtown Tempe, it was noted, is a hub of traffic for vehicles and alternative modes due to business offices and ASU campus. Intersections in downtown Tempe and other heavily trafficked intersections have vibrant green paint to signal bike boxes.

“The purpose of that is really just to alert drivers that there will be bicyclists,” Yee said. “It’s more to gain the attention of drivers than anything else.”

Due to harsh summer sun in Arizona, green paint fades quickly and it is expensive, but those green bike boxes will, in all likelihood, remain at high-traffic intersections, she said.

With the high density of commuters downtown, there likely will be more crashes, which Tempe hopes to decrease, according to Yee.

While the overall number of bicyclists and pedestrians killed by vehicles has been steadily increasing since 2009, according to pedbikeinfo.org, Tempe has safety programs to counter the trend.

Additionally, by partnering with those involved in parking and transportation services at ASU, planners have the ability to provide safety tips and focus on elements they can control, including the education of bikers and commuters. This issue arises every year as ASU receives an influx of students new to the area, who are uninformed regarding local laws and best practices.

When Tempe updates its rules for scooters and bike users, planners say ASU will share those on its social-media channels and send emails to all students. Tempe also works with the dean of students office and offers seminars for international students. Meetings for members of Greek row and off-campus housing newsletters are sent out, as well.

“We know crashes will happen, but we want to lessen the severity of them,” she said. “There are several ways we can go about this. Engineering: designing the roads to make it comfortable for all users. Education: being mindful of your areas and vehicles knowing cyclists and pedestrians are present, especially if you’re downtown.

“Emergency services: If something does happen, our emergency services can respond quickly. We have Vision Zero policies to make this goal happen. We just installed flashing lights around school zones that draw attention and we also did these high-visibility crosswalks for the students that walk or bike to school.”

Vision Zero operates an information dashboard that plots where collisions have occurred since 2012, and city planners strategize their safety plans around their data, according to Yee.

Tempe is working on a Transportation Demand Management project as well as mobility hubs, according to Yee. TDM is focused on adjusting traffic flow within the inner city and promoting carpooling or alternative modes of transportation to limit congestion, she said. The Tempe population practically doubles during the day due to major employers and ASU, according to studies she referenced.

Yet another project is a mobility hub, in which planners pinpoint target areas where commuters can hop off light-rail, and then have available scooters instead of driving into town.

While traffic problems will increase every year, Tempe is pushing to stay ahead of the curve.

“Our future is to create something more sustainable, and adding roads and increasing capacity for cars is not it,” Yee said.

She also indicated that there is no timetable for completion of the various projects, but there will be more meetings in the fall.