When soldiers come home from action, they often aren’t the same person as when they left, physically or mentally. There are charities and projects for those who were left physically compromised, but rejoining society may be the toughest battle.

Recently, the American Legion Veterans Association hosted Operation Shockwave, a charity that works to prevent suicide of returning veterans by helping them cope with the transition back to society.

Sept. 5-11 is National Suicide Prevention Week and the entire month is dedicated to the cause.

Operation Shockwave used a creative approach, providing a Traveling Butcher AZ food truck, a raffle, music performances and, for the truly cold-blooded among them, ice baths to raise money and awareness of their cause. Veterans, allies and volunteers took turns sitting in the teeth-rattling cubes for 22 minutes to signify the 22 veterans who die by suicide every day. The effort was expected to generate a modest return, but exceeded expectations by raising more than $23,000. 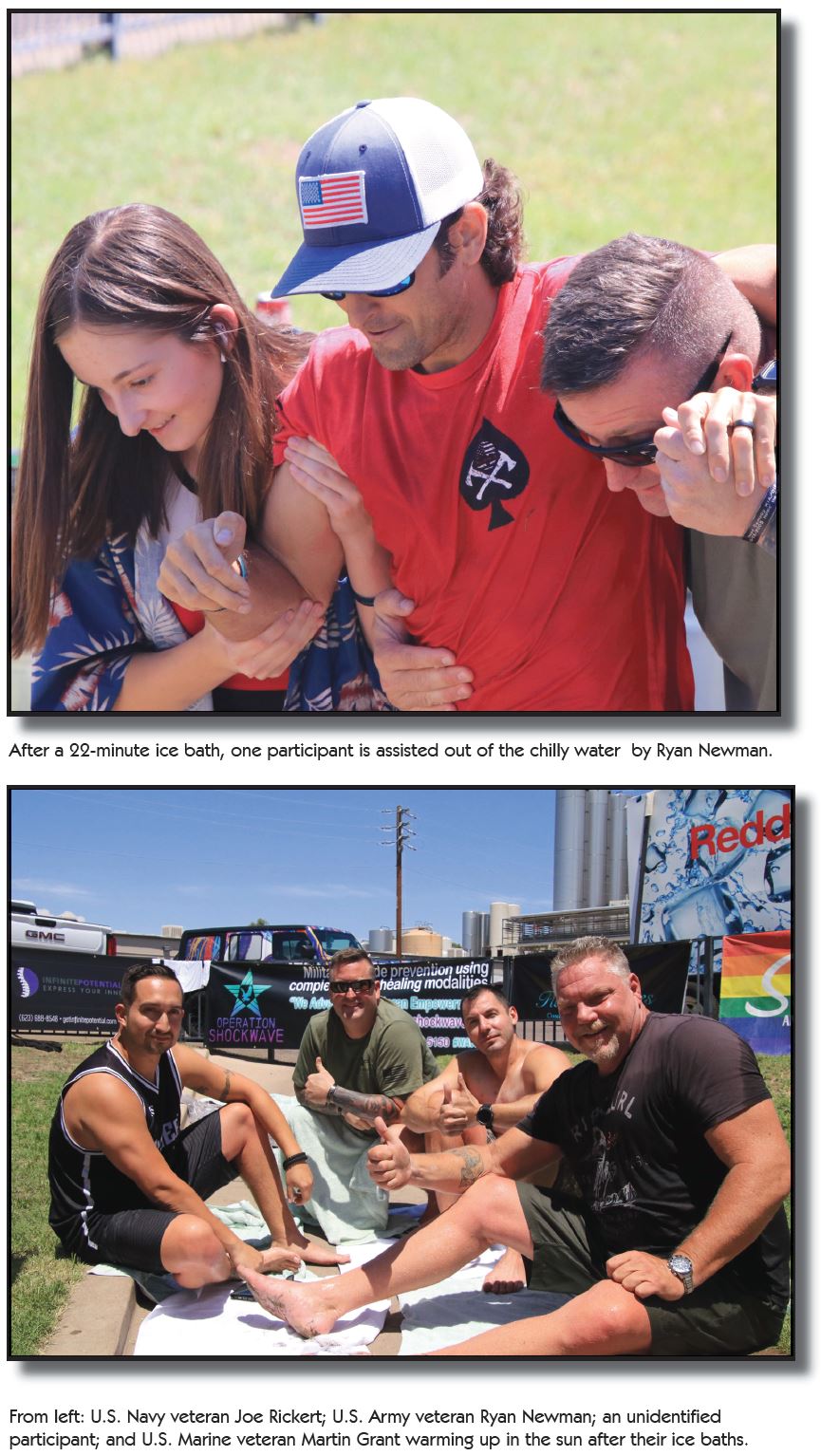 The money will support the Operation Shockwave’s mission of providing emotional rehabilitation and financial aid as well as helping to sustain the sense of protection and family that service personnel had with their fellow soldiers.

Ryan Newman, a veteran who served eight years in the Army, including two combat tours in Iraq, said that he got medically chaptered out of Iraq and struggled to find peace when he returned to the U.S.

“When I got home, I tried to deal with the stuff myself, get help, and I just kind of dealt with it, I didn’t talk to anybody,” Newman said.

After struggling in 2012 with potentially losing his home, with two kids and another on the way, he tried to take his life. Newman got help. During his rehabilitation, he began training service dogs. Newman said he went back and trained his own service dog and it saved his life. Newman met one of the co-founders of Operation Shockwave, CaS Facciponti, at another ice-bath challenge two years ago. They formed a partnership and he has been with Operation Shockwave since April, which he says has helped him decompress and talk freely about his struggles with others who have similar experiences.

“I didn’t want anything to be wrong with me. I did all these things—two combat tours couldn’t stop me. (Then) I came home and I couldn’t go grocery shopping,” Newman said. “I never talked about it. Getting out and learning to talk about it in a judgment-free zone, talking to somebody and not having anyone judge me is the first big step.

“Everybody has their own trauma, but being able to talk about it with the people that just understand is the first step of coming home.” 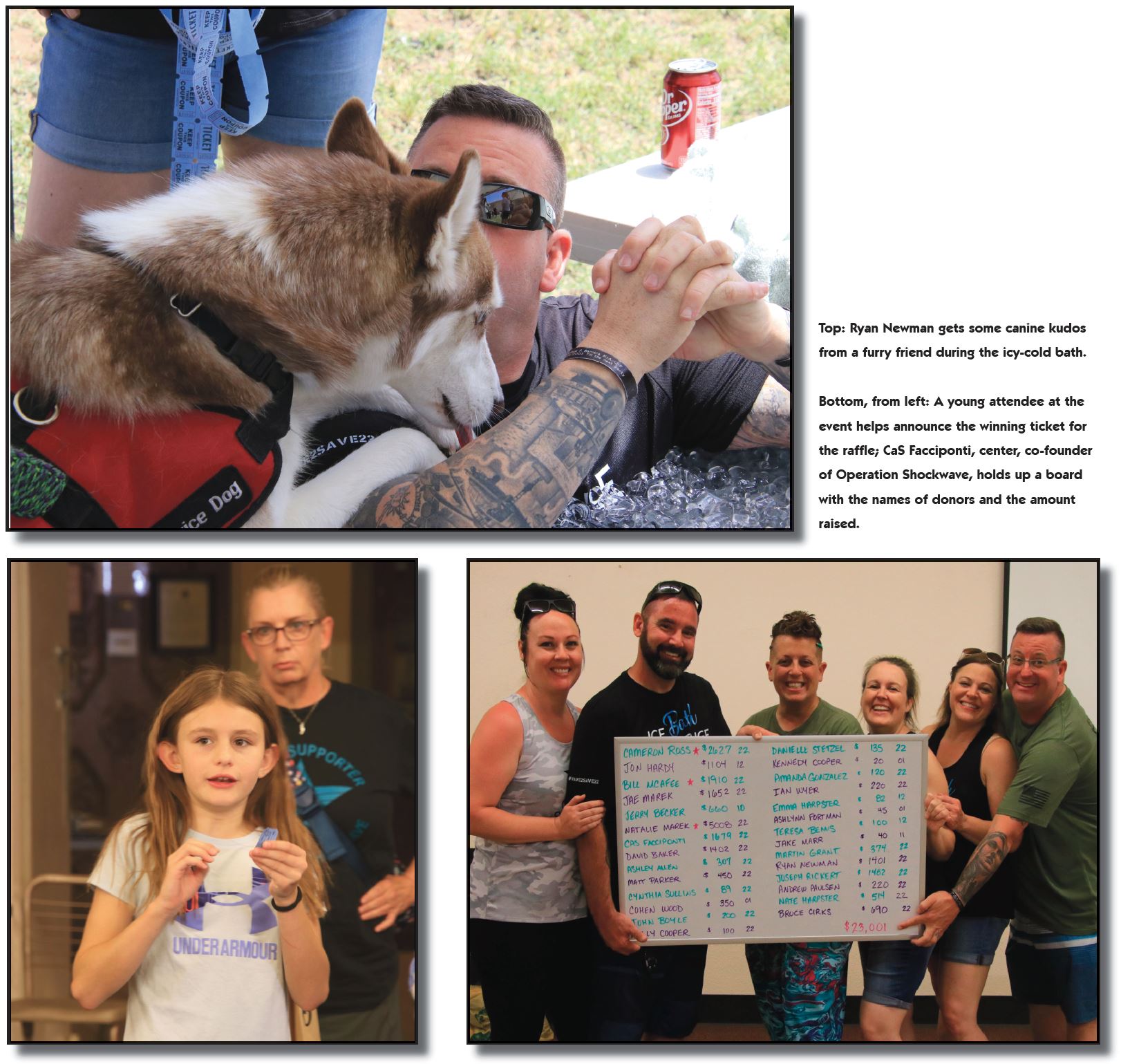 “Anybody who wants to help someone who needs help, I’m in. But this specifically hits pretty close to home because, out of 52 guys that were in my platoon in the Marine Corps, several of them have died by suicide since they got out,” Grant said. “I see what’s happening to these guys and I get the fact that sometimes it’s a really hard adjustment to make.

“The V.A., they’re not really designed for that. They are designed to help guys that are physically wounded. It’s not necessarily the fact that they’re mentally wounded that makes them attempt suicide. They have been specifically designed for a completely different reality than civilian life.”

Through connections with fellow veterans and word of mouth, Operation Shockwave has been gaining steam.

Facciponti says that veterans are an underserved population with regard to mental health and rehabilitation. One veteran dies by suicide every day in Arizona, making it the sixth-worst state for that tragic distinction. According to Facciponti, veteran suicide is a major issue that society must address.

“The important thing is knowing that we have all gone through trauma, and if we can see each other in that and meet somebody where they are and not say ‘you need to do this’—if we could want something that someone wants for themselves, then we can heal through that process,” Facciponti said.