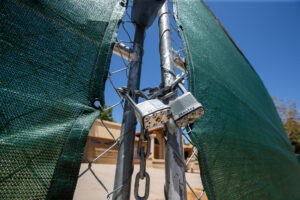 There are also a few small signs dotting the front yards of Calle de Arcos—signs that point to a neighborhood dispute that appears to have arrived at a precipitous conclusion.

“We are against commercial business getting rich at the expense of our neighborhood,” the signs declare in black all-capital letters.

The notices refer to a conflict that began back in 2019 when Jim Robinson purchased a five-bedroom, 3,000-square-foot home on the street, intending to convert it into an assisted living home for 10 residents.

Robinson sought and received a building permit from the city of Tempe to carry out the extensive work required to turn the structure into a group home. The interior was gutted to make way for renovations that never materialized.

Today, a green mesh fence encircles the property and a For Sale sign is posted out front. Construction efforts, however, have come to a screeching halt.

Nick Bastian, a Realtor who lives nearby, noticed the home was listed for sale, plans for an assisted living facility seemingly dashed.

“It seems to me like we’ve got a situation here with an inexperienced developer who was pushing the envelope,” Bastian said.

“If he had just done it within the regular guidelines, with what the community would bear, I don’t think he would have had nearly the push-back that he did.”

Pat Dressendorfer was one of those who pushed back. The retired nurse, who lives on Calle de Arcos, designed and built the home she and her family have lived in for 31 years.

“I don’t want that traffic. First of all, they were going to have one person on nights taking care of a maximum of 10 people. Ten people with one person at night? That’s ridiculous. As an R.N., I know that,”

Mark Kaiser, another neighbor, tried to play peacekeeper between Robinson and the collective wrath of numerous residents.

“The people along the street have serious heartburn with him to say the least, hence all these signs that have been there since he started the reconstruction project,” Kaiser said.

Once the property went up for sale, Kaiser said, Robinson contacted him to see if he could persuade the neighbors to take down the signs so prospective buyers wouldn’t be spooked. The neighbors declined but the signs vanished anyway. An email Kaiser said he received accused Robinson ofhaving removed the signs, so he confronted Robinson with the complaint.

Robinson did not respond to phone calls or emails from Wrangler News. Neighborssay he’s not being truthful and accused him of being a “flim-flam” man. The signs in question were reprinted and at press time were still visible.

So what happened to the group-home venture? According to Kaiser, Robinson said the COVID-19 crisis had “hit his business pretty hard,” so he elected to sell the property. Robinson owns another home-turned-assisted-living facility near Kyrene and Elliot at 44 E. Knight Lane.

Kaiser also noted that in addition to the signs posted in front yards, neighbors came up with other ways to thwart Robinson’s effort to establish a group home in the Corona del Sol Estates neighborhood.

One elderly resident, who lives in the immediate vicinity of Robinson’s property, says her son has filed a request with the city of Tempe to have her house become a group home though she adds there are no plans to actually establish one.

If she is successful in the strategy, the new owners of Robinson’s property would not be allowed to develop a group home on the premises. That’s because the Tempe Zoning and Development Code has a requirement for a 1,200-foot separation distance from the lot line of one group home to that of an existing group home.

On another front involving Robinson’s plans, he calls the business Avana Assisted Living. “I don’t think he ever formally trademarked it,” Kaiser said. Distressed neighbors, he noted, took the name and trademarked it themselves.

Bastian, the Realtor, says Robinson’s endeavor will likely prove to be a costly mistake. “You’ll have to find somebody who wants to take on a project like that but the math has to work. It’s currently pretty much gutted. “I’m hopeful that somebody just goes in and makes it a really nice house, puts a nice person or people in there—somebody that wants to live (in) and be a part of our community.”