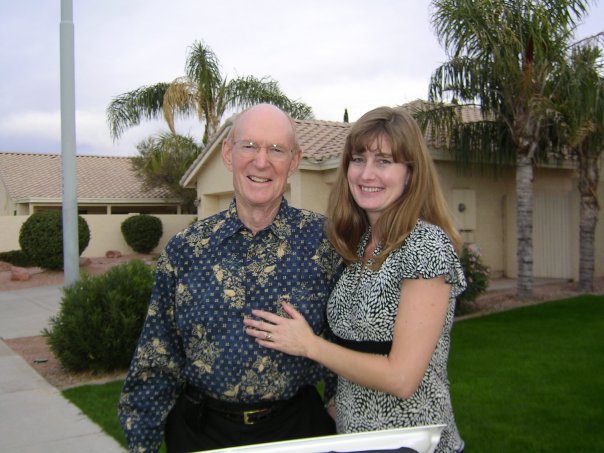 With Fathers’ Day right around the corner, my mind naturally turns to my own father, the man who taught me how to love, how to live and how to write.

A soft-spoken man of integrity, Dad instilled strong values in his five children and raised us with a code of honor he learned at his East Coast boarding school. I can’t remember him ever raising his voice at us and yet we were keenly aware of a definitive line in the sand we dared not cross. Our love for him was such that we wouldn’t have wanted to disappoint him, and wanted nothing more than to make him proud.

He taught us what commitment meant and that we should do the right thing, no matter the cost.

Dad served in the U.S. Air Force during the Korean War, spending his four years of service living in the damp and cold of King’s Lynn, England, a scant 100 miles from London. Determined to raise his family somewhere with a more temperate climate after his service abroad, he and my mom and eldest sister settled in Phoenix in 1955.

Dad quickly turned his attention to earning a degree at Arizona State University, where he studied journalism, public relations and advertising.

As one might imagine, I grew up in a home surrounded by books, newspapers and magazines, just a short bike ride from the local library. Some of my earliest and best memories are of Dad reading stories to us, or better yet, telling multi-part tales he’d spun himself, broken-up by cliff-hanger endings and his catch phrase: “To be continued—tomorrow night!”

I still remember begging for a little more reading time before lights out. “Can I just finish this one chapter, pleeeease?” I’d wheedle. “How many more pages?” he would ask, holding out his hand to examine the tome. His quiet but firm answer was generally, “OK, but then get some sleep.”

Dad was my first editor and he drilled Associated Press style into me when I was still in junior high. He was a real stickler for punctuation and grammar and, believe me, nothing slipped by the man. We may have been only writing an essay for our seventh-grade English class, but by golly, it was going to be stellar.

When my own stories began to flow, I would leave them on his chair to review after dinner, anxiously awaiting his approval. By this point in his career, Dad was vice president of advertising and public relations for a major corporation. I like to say that I went to journalism school before ever leaving home.

Understanding the sound bite before it was even known as such, he made liberal use of pithy statements intended to guide us kids through life’s various twists and turns:

“Honesty is the best policy.”
“You can’t run away from trouble.”
“There but for the grace of God go I.”
“This too shall pass.”
“Doll, it’s the card you’ve been dealt.”

He was an idealist and yet a pragmatist. He wouldn’t countenance any sort of deception or unethical behavior and yet he wasn’t haughty or given to judgment of others. He was a man of faith and mercy who spent the last 20 years of his life—his retirement—serving the poor and inspiring his children and grandchildren.

He didn’t let us wallow in sorrow or self-pity but he ac- knowledged the reality of our feelings. He encouraged us and believed the best of us, even when we couldn’t see past our struggles.

There have been times over the years since his passing that I’ve wished I could have one more conversation with him, just to ask his counsel. Yet deep in my heart, I know somehow exactly what he would say. He’s still there, living inside me, showing the way.