A new emergency-response strategy rolled out across the country has resulted in cardiac arrest survival rates nearly tripling, according to a report by Tempe Fire Medical Rescue.

The process promotes bystander use of compression-only CPR and the so-called CALL-PUSH-SHOCK method, which fire officials say has been so effective that the department plans on extending training sessions throughout Tempe.

A CPR training session held recently at Sun Devil Stadium was designed to help educate the public about the new national emergency response movement dubbed CALL-PUSH- SHOCK. The method, developed by a national collaboration of cardiac arrest prevention groups, promoted a basic three-step action plan that anyone can use to save a life in the event of a heart attack.

“We’re trying to increase our survival rates,” said Andrea Glass, the local department’s assistant chief. “This is an easy way to get to the community and provide information that is simple, that is easy to use and can help us make a difference.”

The method instructs bystanders of cardiac events to first call 911 to ensure rescue services are on their way. After calling for help, they are told to push on the patient’s chest by doing compression-only CPR to keep blood flowing to the brain. Finally, to shock the patient’s chest with an automated external defibrillator, or AED, if such equipment is available.

Living example of how it works

After a short presentation during the ASU training session on both the science and myth surrounding bystander CPR, crowd members were introduced to a living example of the technique done right. After a brief introduction, Daniel Sardina of American Medical Response was awarded an Outstanding Citizen service award by Tempe Fire Chief Greg Ruiz for performing CPR on a cardiac arrest victim at a local racquetball event.

“I was a participant in the event,” Sardina said. “I participate every year. A good friend
of mine told me that they were looking for paramedics or that 911 was needed on a court upstairs. Being a first responder, and someone that my friend trusts, I went upstairs to evaluate the situation.”

When Sardina arrived, he said, he found the patient pulseless and without breath. He began administering CPR and called on the people around him to call 911 and find an AED. Sardina’s knowledgeable response and fast action, coupled with use of the CALL-PUSH-SHOCK method, were said to have saved the patient’s life.

“Any time that you can have a success story, or someone that was able to talk to you after a traumatic event like that, it is always a warm feeling,” Sardina said.

Heart disease is the leading cause of death in the United States, according to the Centers for Disease Control and Prevention. In fact, over a quarter of U.S. deaths per year happen because of heart-related complications.

In Tempe, according to knowledgeable sources, many know someone with heart issues in their family or through their work. Some have heart issues themselves. So when Tempe began offering hands-on training with emergency response professionals, people took it seriously.

“I wanted to learn how to do CPR in case I came upon anyone who needed it. I didn’t want to feel helpless,” Tempe resident Diane McMartin said. “…I’d feel much better if I were able
to jump in and do something and be helpful rather than stand back and just watch.” 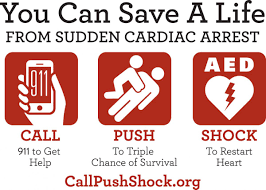 South Tempe resident Dan Kibel told of his own experiences. “I did have a father who had some heart issues, and if something had happened to him I probably wouldn’t have known what to do. After taking this class, I would have jumped in and done something.”

The CALL-PUSH-SHOCK program is co-sponsored by members of the National Cardiac Arrest Collaborative, which was formed in part by the American Red Cross, American Heart Association and the U.S. Department of Health and Human Services. The collaboration’s formation was the eighth recommendation listed in a June 2015 report, “Strategies to Improve Cardiac Arrest Survival: A Time to Act” published by the National Academies of the Sciences with hopes of improving cardiac arrest outcomes in the United States.

“Currently we are (working with) Tempe Union High School District. We are going to start providing more…educational classes, whether it’s through lunch-and-learns or out in the community. Then, through a three-year campaign, we are going to train 100 percent of city of Tempe employees.

“So if you’re in a city facility you will always have somebody who has been trained in compression only CPR nearby.”