Why is it that so many people enjoy smashing inanimate objects?

Krysten Leach, owner and manager of Desert Smash AZ in West Chandler, has a theory.

“I think basically it’s all in your head,” says Leach. “You’re getting to do something you’re usually not allowed to do; something that’s typically taboo. Also, you don’t have to clean it up.”

On that last point, she’s referring to her own new business, at which people can work out their frustrations by taking a baseball bat or golf club or sledge hammer to a variety of computer terminals and old TV sets and other disused and discarded breakables, for a price.

Leach has seen the psychological liberation of her customers once they get started: “You see that baseball bat go from small hit to small hit to really releasing
all that tension.”

When you’re done wreaking— wrecking, maybe?—havoc with the screens and keyboards and glass bottles, you can walk away, blissfully free of any responsibility to clean up the mess you’ve made. Leach confesses that she might find an ulterior pleasure for herself in
the clean-up process. 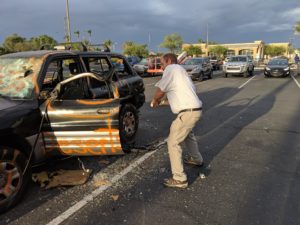 “I love it,” she says with a laugh. “Before I leave work, if there’s any leftover computer monitors or whatever, I finish them off.”

Customers must wear closed- toed shoes, even though they’re required to wear coveralls, goggles and face masks (and sign a waiver, of course) before they take their first swing. They’re also kept under video surveillance during their stay.

“It makes them look like shrunken-down astronauts,” she says.

So how did this young mother from Alaska come to run a business based on an activity, e.g., breaking stuff, that traditionally has been regarded as male? Leach doesn’t concede the preference.

“You would think it would be more of a boy’s forte,” she says. “But women love it. (We) women don’t get to express ourselves aggressively. I’d love to break that bottle, and here I can.”

Specifically, she was inspired to Desert Smash’s innovation when she and her husband had their first date night out after their child was born. 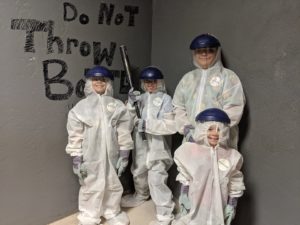 Thus Desert Smash provides a variety of day care activities for your little ones while you’re in there taking out the fury that those same Terrible Twos or thereabouts likely have contributed to, on poor defenseless computers.

The event, at which costumes are encouraged, will feature competitive pumpkin-tossing and “Gallagher- style” pumpkin smashing, along with face painting, vendors, a “Trunk-or- Treat” plus other fun.

A portion of the proceeds will benefit The Armer Foundation for Kids, a local non-profit that assists families with kids with extreme medical needs.