The sky’s the limit for Erica Diaz, a senior at Marcos de Niza High School. 17-year-old has a plan for her life that will combine aviation, serving her country, teaching disadvantaged students and traveling the world, all without being strapped by enormous college debt as so many young people are today.

Following her graduation in May, Erica intends to make the most of her natural talents in math and science by enrolling in engineering and education courses at a local community college.

From there, her goal is to enlist in the U.S. Air Force, learn to become either a pilot or mechanic and, eventually, go abroad to teach. Erica is among a growing number of high school students choosing to bypass four- year universities and pursue alternatives for their post- secondary education and training. For her, tuition costs were reason enough to look for something different.

“The cost was my biggest concern about college,” she said. “I value education, but paying that much, that was not something I wanted to do. I plan to graduate without student debt. I want to pay for everything with scholarships and grants.”

The average cost of tuition and fees for the 2017–2018 school year was $34,740 at private colleges and $9,970 in-for state residents at public universities ($25,620 for out- of-state residents), according to The College Board. The average cumulative student debt balance in 2017 was $26,000 for graduates of public four-year schools and $32,600 for graduates of private nonprofit four-year schools, The College Board reported.

By comparison, the average yearly cost of tuition and fees for community college students in the U.S. is $3,347, according to the American Association of Community Colleges. At Arizona State University’s

Tempe campus, undergraduate tuition is around $10,00 a year. And four-year electrician apprenticeships in Phoenix cost about $8,000, according to Rosendin, a large private electrical contractor based in Tempe.

“These apprentice programs get overlooked because of the perception it’s a nontraditional education path,” said Brandon Stephen, Rosendin’s division manager.

“Given that apprenticeship programs have been around since the Middle Ages, we see them as the most traditional path.”

They graduated with no student- loan debt and well-paying, sustainable careers in the construction trades, Rosendin reported.

High school students in Tempe and across the East Valley are learning a variety of trades in Arizona’s first Career Technical Education District.

“In the old days, students who felt they didn’t function in a traditional high school or didn’t fit in somehow thought they had to go to EVIT,” said Steve Mancuso, Marcos de Niza’s department leader of guidance. 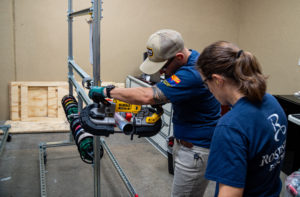 “But now, EVIT’s looked at as a positive, and students are going there for a reason, say, because they want to be a veterinarian’s assistant or go into the aerospace program.”

Schools in the Tempe Union School District have long provided myriad career options to students, Mancuso noted. But there’s been a shift toward involving freshmen and sophomores in the conversation.

“There are lots of doors and windows open to them, and we want to keep them open as long as we can, so that they don’t feel they have to go this way or that way,” he said. “Before it was, you are either pegged here or pegged there, and you couldn’t move between the two. But now they see, you can learn to be a barber and, later, own your own barber shop.”

School counselors sometimes have to convince parents that their children have realistic, multiple choices, Mancuso said.

“My mom’s the biggest part of me having this plan,” Erica said. “She was always asking me what my plan was after graduation. She didn’t want me to graduate and end up not getting a job.”

There seems little possibility of that.