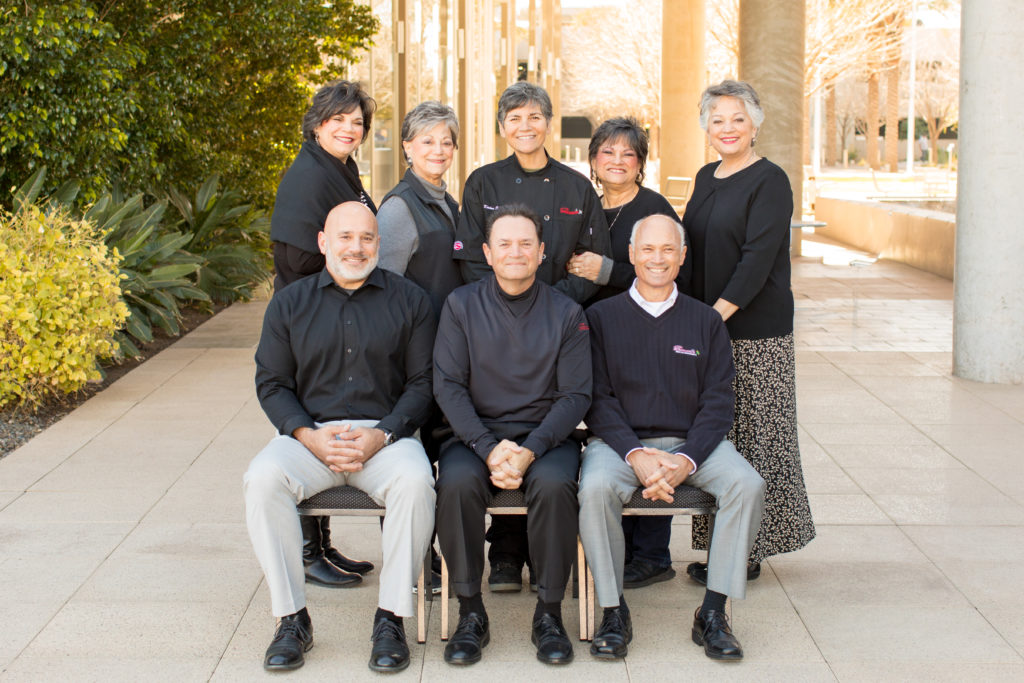 The eight Serrano siblings have embraced their parent’s legacy of business in Chandler and the wider community. Photo courtesy Ric Serrano

Editor’s note: The Serranos are marking their 100th anniversary in our community this year, so Wrangler News thought this would be an ideal opportunity to share with our readers the backstory on this pioneer family’s success and how it all began.

The history of a distinguished Chandler family’s 100-year business involvement with the local community begins with a love story–the soulmate kind.

“The story we were always told was, when my grandfather and grandmother met, it was pretty much love at first sight, and they kind of rushed into marriage,” recalls Ric Serrano, president and chief executive officer of the Chandler area’s Serrano’s Mexican Food Restaurants, LLC. “But there was trouble right away.”

The “trouble” with the marriage of Mary and Ramon Felix, which ultimately would become part of the Serranos’ evolving history, was family resistance, according to Ric Serrano’s great aunt, Ramona Felix, whose family in its early years had migrated from Mexico to Arizona.

“Those were old-fashioned times, and Mary was from the local Basha family who had come to Arizona from the East,” she says. “Her family was of a proud Lebanese heritage that preferred that their children marry within that heritage. You see, the Lebanese people had struggled, and they wanted their culture to survive, to thrive. But my father was Mexican, working in the mines around the early town of Sonora Rey, where the two met. So when the marriage happened, it upset Mary’s family.”

“Mary’s family actually stopped talking to Ramon and Mary when they first got married,” Ramona explains, “but they had both kind of anticipated it,” saying the issue came up early on in their relationship.

“After he saw things were getting serious with Mary, my father proposed to her, saying, ‘Well, you’re Syrian [Lebanese] and I’m Mexican, so are you going to marry me, or not?'” Ramona says, laughing.

“Now, Ramon was not being disrespectful,” Ramona explains. “You have to understand this was long ago, at a time when Syria had taken over Lebanon. So it was common in those days in the States to refer to the Lebanese as ‘Syrian.’ But the important thing is, my mother very quickly said, ‘Yes.'”

“And then, she gave birth to two healthy boys, born 15 minutes apart, and that changed everything.

“Oh, Mother’s family loved those boys! They dressed them like little princes,” Ramona remembers. “So after the boys’ birth, everything was fine.”

Meanwhile, two highly successful businessmen, Luis and Albert Serrano, had fled Revolutionary Mexico with their families in the 1900’s and settled in Tucson, working in another family’s clothing business. Luis’s sons, also named Albert and Luis, worked with them.

“My grandfather, Albert, and his brother, Luis, heard that there were growing business opportunities in the Chandler area and took advantage of it by opening their own clothing store there in 1919 called the Popular Store,” says Ernie Serrano, Jr., director of operations for the Serrano’s chain.

Around the same time, Ramon and Mary Felix and their family had also relocated to the Chandler area, where their daughter, Eva, eventually met and married Albert’s son, Ernie Serrano, Sr.

The extended Serrano family saga had begun to play out.

“It was in the Serrano brothers’ family clothing store that Ric and I and the rest of the kids started to learn about business,” says Ernie Serrano, explaining that, after the age of 10, he and his siblings would go to the family store, tagging and steaming clothes, and racking them for sale.

When a property behind the store—a former restaurant—became vacant, the family decided to take a risk and change businesses, opening their La Casa Serrano Mexican Restaurant in 1979.

“We already had a name in the community because of the earlier businesses,” he says, “so we got busy right away, and I’m glad to say we’ve stayed that way.”

Now with five locations in the area, Ric Serrano stresses the Serrano’s restaurants’ success still is due to its family commitments. As the family celebrates its 100th anniversary of business, those family commitments are tighter than ever.

“Six out of eight siblings now work within the business, having taken over after our parents’ passing,” he says, “and we extend our family feeling to our employees.

“We’re the oldest continually owned business venture in the whole area, and I think our family bond, from the old days to now, is the reason why we’ve sustained our success.”