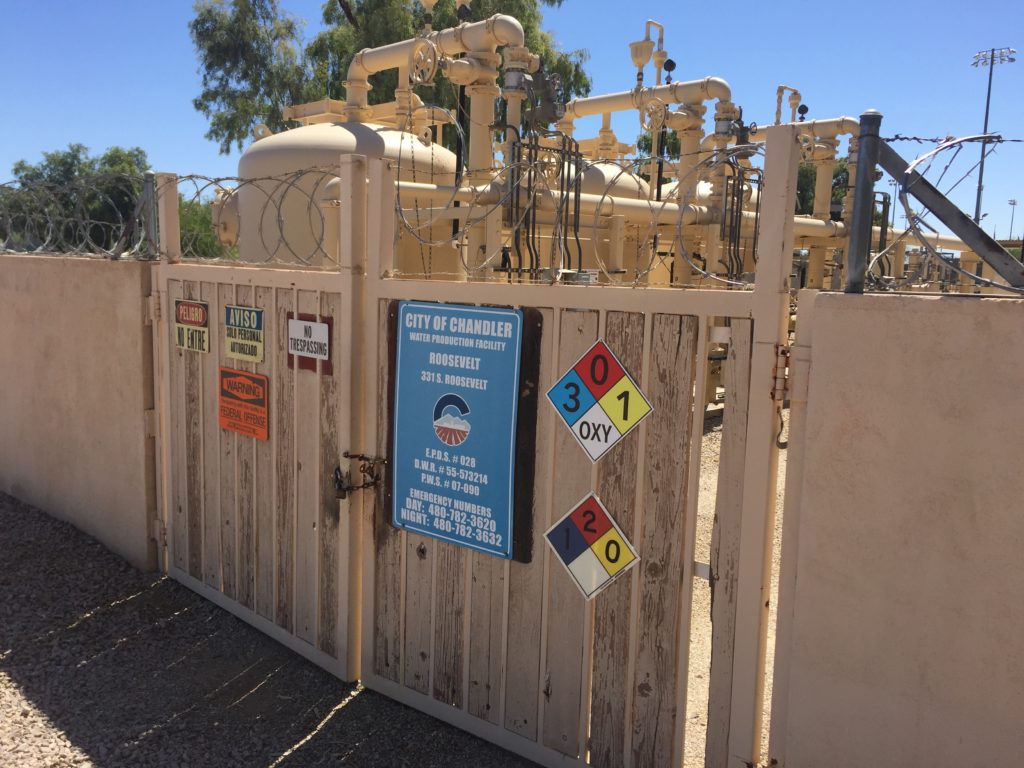 Turning on the tap and filling a glass with clean, safe drinking water is something most Chandler residents take for granted. They might not think about the fact that the city regularly tests its water system for contaminants.

A legal notice about the quality of drinking water was recently sent to water customers who live in West Chandler after routine testing revealed the city’s water system exceeded a drinking water maximum contaminant level standard. The city’s water quality division regularly monitors for the presence of over 90 drinking water contaminants regulated by the U.S. Environmental Protection Agency under the Safe Drinking Water Act.

Testing from a West Chandler site between July 2018 and April 2019 showed an average total trihalomethanes of 85 parts per billion. The site is located near the intersection of Chandler Boulevard and 54th Street. The city’s 11 other TTHM sampling sites remain below the MCL.

The notice sent by the city states “this is not an emergency. If it had been an emergency, you would have been notified within 24 hours.” Still, it advises residents that those who have a “severely compromised immune system, have an infant, are pregnant, or are elderly” may be at increased risk and should seek advice from their health care providers about drinking this water during the interim time period while the city is resolving the issue.

Chandler is encouraging residents to share the information about its drinking water issue with those who may not have received the official notice such as businesses, schools and those living in apartments and nursing homes.

The executive director of a nursing home located near the West Chandler testing site did not want to comment on the situation but said the facility filters all its drinking water. According to the city’s notice, reverse osmosis systems and pitchers or taps with carbon filters can reduce or eliminate the total trihalomethanes.

People who drink water containing trihalomethanes in excess of the MCL over many years may experience problems with their liver, kidneys, or central nervous system, and may have an increased risk of getting cancer.

The city’s notice states customers can safely continue normal use of Chandler’s drinking water and that boiling or other corrective actions are not necessary.

Chris Connor, Utility Regulatory Affairs manager for Chandler, said the city’s public works and utilities staff work around the clock to ensure Chandler has a safe drinking water supply, with extensive testing performed every day to ensure that it meets the health and safety standards set by the state and federal government.

“When we were notified of the violation, we responded quickly and made process adjustments that resulted in the contaminant level rapidly dropping to well below the required threshold,” Connor said. “While we were required to notify some residents about this elevated level of TTHMs, this exposure was limited and did not pose an immediate health risk. It was not an emergency and Chandler water is safe to drink.”

The city has already made adjustments to the treatment process and non-compliance sample results verify that the TTHMs are currently well below the Maximum Contaminant Level or MCL. The city will take the next compliance samples in early July, based on the compliance schedule. Because the MCL is calculated based on an average, July will be the earliest it can achieve being below the MCL under the EPA rule.

Chandler water quality staff can be reached at 480-782-3654 during normal business hours and is available to answer questions. The legal notice is available at chandleraz.gov.

Joyce Coronel
Joyce Coronel has been interviewing and writing stories since she was 12, and she’s got the scrapbooks to prove it. The mother of five grown sons and native of Arizona is passionate about local news and has been involved in media since 2002, coming aboard at Wrangler News in 2015. Joyce believes strongly that newspapers are a lifeline to an informed public and a means by which neighbors can build a sense of community—vitally important in today’s complex world.
Previous articleNew ticket pricing at TCA brings savings
Next articleH.S. grads make return to their Kyrene classrooms