Dumping of plastic bags and other man- made pollutants is raising heightened concerns among biologists, one of whom will seek to increase public awareness—and ask for help to forestall an ecological crisis—at a Wednesday, April 24 talk at West Chandler’s Sunset Library.

Rolsky, who is associated with ASU’s Biodesign Center for Environmental Health Engineering, is passionate about keeping the oceans clean, seafood edible and species protected from extinction. He will share his insight into the plastic pollution epidemic, from plastic bags to microplastics, with discussion of how plastics got into the world’s oceans, how they behave in the environment, and what society can do to prevent ecological disaster.

Rolsky’s work involved marine and aquatic microplastics, which have emerged as a major source of concern within many ecosystems and environments. Their identification, fate and impact are only now starting to be understood and the group has developed several analytical tools to help improve upon this, noted Rolsky. 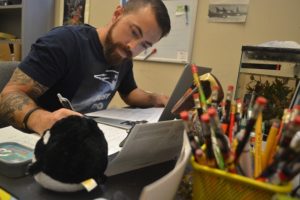 He said his group is collaborating with ASU’s Fulton School of Engineering on several projects pertaining to microplastics as well as with many groups around the world.

He also has worked for several years on using non-invasive research methods to collect species health information, including fecal samples from wild species such as killer whales. Through this information, scientists can gather knowledge pertaining to hormonal activity in the realm of stress, reproduction and overall species health.

Science Matters @ CPL is a series of monthly talks exploring the latest research or knowledge on various scientific topics.

Based on the global Science Café movement, the series aims to reveal the direct connections of science—in current research or in current practice—to people’s everyday lives, while inspiring wonder and a greater understanding of the world and space around us.

The Science Matters talks, led by a scientist or researcher, are open to everyone and intended to foster open, easy-to-understand conversation.

Science Matters @ CPL programs generally run for an hour, with the speaker talking for 20-30 minutes to allow time for audience questions and discussion.

On Tuesday, May 7, the topic will be “Can the Zombie Apocalypse Really Happen?” a free 6:30 p.m. presentation by Epidemiologist Dave Engelthaler at the Downtown Chandler Library. The June 4 presentation, “Exploring the Moon Today,” also will take place at 6:30 p.m. at the Downtown Library.