“You’re telling me that I had a heart attack?” These were the first incredulous words Scott Eckenrode remembers saying after a routine afternoon with his wife in their Chandler living room last Aug. 3.

Now, he lay under the glare of Dignity Chandler Regional’s Emergency Department lights, wondering what had happened.

“My wife and I were having an animated discussion about something or other, but I had no recollection of anything after that ‘til I woke up in the hospital,” Eckenrode recalls.

With no warning and no previous symptoms, the healthy 59-year-old long-distance biker had suffered what doctors call Sudden Cardiac Arrest, a medical event that causes as many as 383,000 adult deaths in the United States annually.

Eckenrode’s experience defied these odds, but his ultimate survival was due in large part to the quick action of his wife, Sue, who had learned cardiopulmonary resuscitation while a Girl Scout troop leader in Pennsylvania 20 years ago.

“We were required to get certified in CPR with the Girl Scouts, but I never thought I would need it,” Sue admits. “But on that day, I was thankful I knew what to do.”

At first, she says she didn’t know what was going on. “It was a normal night—Scott and I had had a little dinner and were talking, and I looked over at him and he looked like he was asleep,” she recounts. “But when he didn’t respond after I tapped him on the leg, I knew something was really wrong.”

With her husband now totally unconscious, Sue says she moved instantaneously into an almost automatic mode.

“I was terrified, but when it all started happening, nothing was really a conscious decision—I just started doing what I needed to do.” In spite of her understandably extreme emotions, she was now methodically moving through the steps that are taught in basic CPR courses.

“I started going through the motions. Fortunately, I had my cell phone on my lap, and called 911 immediately, then got up and unlocked the front door like you’re supposed to,” she says. 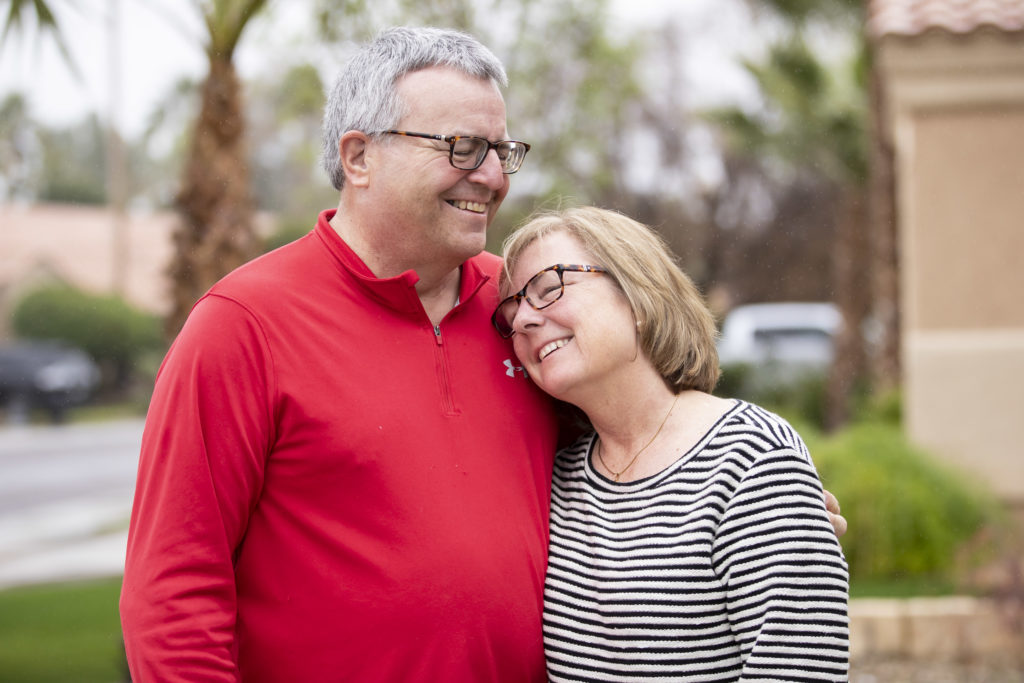 “All the while, I kept thinking, ‘I need to start CPR.’ His heart was definitely not beating.”

She adds one of the dangers of this type of attack is the potential for brain damage if oxygen and blood-flow don’t reach the brain after the heart stops beating.

“Fortunately, the local dispatcher on the line with me was able to patch me over to another dispatcher in Phoenix with extensive medical training, and he monitored with me continuously while I got going.” Now, both worked together to save a life.

“The first thing the dispatcher told me was, ‘We have to get him flat on the floor,’” Sue says, “and I tried that—but Scott is a big man, and he wasn’t going anywhere.”

Now, moving even more quickly, Sue knew she had to improvise.

“Scott was in a recliner so I pushed back hard on it and got him as flat as possible in the chair. And I still kept thinking, ‘I have to start CPR…I have to start CPR.’” Now, she could start, with a knowledgeable partner on the line, working with her throughout the process.

“The dispatcher said, ‘Count with me,’ and I started counting out loud with him,” Sue says, remembering how closely the dispatcher monitored the emerging situation.

“There were times when I would be keeping up, but would be counting to myself, and he’d ask, ‘Are you still counting?’ and it went on like that until the paramedics got there. It seemed like a long time, but they got there in four minutes.”

Once received at Chandler Regional’s ER, Scott went on to suffer three more cardiac arrests, and remained unconscious until the last one. This left his wife with another challenging task: notifying family of Scott’s condition, with no guarantee how it would all end.

“My brother in Scottsdale came to the hospital immediately and talked me through it, reminding me that I needed to have the right strength to talk to the kids,” Sue recalls, telling her son and daughter their father was still unconscious. It was now 4 a.m. At his fourth episode, Scott came awake and was aware of his surroundings.”

The return to normalcy was short lived. “I looked up and saw the doctors and my wife in theroom, and right then, when I had another (episode), it was kind of like passing out. No symptoms, no discomfort.”

Because such medical events happen due to an electrical malfunction in the heart, Scott now wears a pacemaker, and a pack called an AED (automated external defibrillator), which includes shock paddles, should they ever be needed. Other than these lifestyle add-ons, Scott says his daily life and physical regimen and commitment to long-distance biking have changed very little.

“The day I had my attack I had just ridden 35 miles,” he laughs. “And now, after a slow start and build-up, I have my cardiologist’s blessing to keep on biking.”

Given that less than eight percent of those who have cardiac arrests outside the hospital survive, the long- married Eckenrodes are both prone to reflect deeply
on Scott’s survival with no brain injury or ongoing complications; Sue says she still marvels at how various circumstances came together.