The lure of lost gold runs deep in Josh and Jesse Feldman’s blood. At least as deep as their father’s, anyway: Ron Feldman became so intrigued with Arizona’s legendary Lost Dutchman mine, first as a kid in Buffalo, N.Y., and later in his youth in Southern California, that he moved here in the late ‘60s.

The senior Feldman didn’t conclusively find the entrance to Jacob Waltz’s elusive 1800’s-era claim in the Superstition wilderness, though his Mammoth Mine is considered a candidate.

But he did found a successful riding business, the O.K. Corral Horse Stables, in Apache Junction, on the picturesque edge of Lost Dutchman country.

Ron and wife Jayne also raised two sons in whom he instilled his fascination with prospecting for gold treasure. Josh and Jesse have turned their fixation into a “reality TV” career: for three seasons they were part of the cast of Animal Planet’s Ice Cold Gold, struggling to find the metal in the frozen wilds of Greenland. 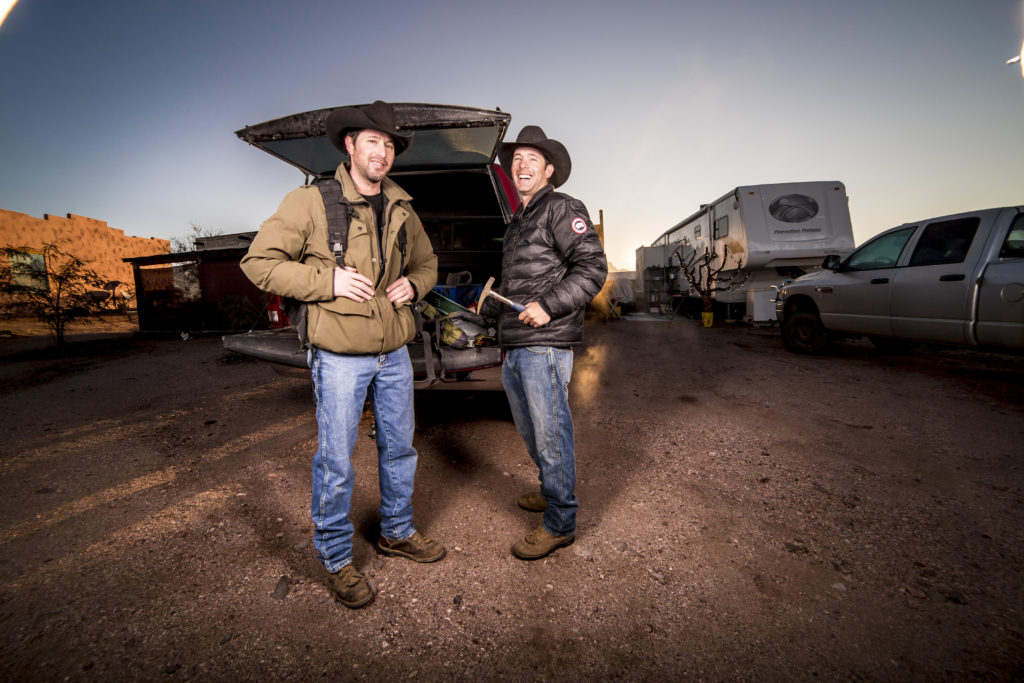 “Greenland’s on hold, my friend,” says the recently married Josh. “We hit Greenland hard for three years, but we felt like we’d done as much as we could do.”

Instead, coming to Tempe and Chandler TV screens, among a wide assortment of others around the country on Jan. 14, is the premiere episode of the new Travel Channel series Lost Gold, in which the brothers hunt for historical treasures that have gone missing.

“The show is history first,” Josh says firmly. “We head out, we chase these stories from the Old West—any story that could involve gold. There are thousands of these lost gold stories; stagecoach robberies, lost mines, robberies gone bad.”

Feldman is reluctant to give too much away about the new show, but he does offer an example: An episode is devoted to Milton Sharp, a bandit who roamed California and Nevada in the 19th Century.

“That was a stage robbery that went wrong,” says Feldman of the haul from an 1880 Wells Fargo Express stick-up. Sharp spent years in jail—in between numerous escape attempts, one of which kept him at large for years—refusing to divulge where he had hidden the booty from his many robberies.

The Feldman brothers will try to figure out Milton’s secrets. Other episodes are slated to explore lost gold on the Oregon Trail and at the Little Bighorn.

“Jesse and I will take the audience through a lot of history,” promises Josh.

Of course, Josh and Jesse wouldn’t mind a bit if they turned up some literal gold while teaching their history lessons. But in another sense, they seem almost to regard the history itself, the legends and the truth behind them, as the precious treasure in need of seeking out, and of preserving.

“We don’t want any history to get lost,” says Josh. “To find the loot and preserve the history, it doesn’t get any better than that.”