The Aztecs have a chance to earn a 2-2 record Friday night, Sept. 7, when they play a non-conference game at Boulder Creek in Anthem.

Corona’s star wide receiver Ricky Pearsall, who caught 74 passes for 1153 yards and scored 13 touchdowns in 2017, was instrumental in the Aztec’s win against Mountain Ridge.

For instance, Pearsall’s 98-yard kickoff return touchdown against Mountain Ridge was one for 2018 highlight reels.

After Mountain Ridge scored their second touchdown, with about six minutes left in the second quarter, the Mountain Lions, with a 14-0 lead, made the mistake of kicking the ball to Pearsall during the kickoff.

Pearsall made the Mountain Lions pay big time by running the ball back 98 yards to score his first touchdown of the night.

Pearsall’s touchdown ignited the Aztecs. Not only did the defense keep Mountain Ridge scoreless the rest of the game, the offense scored 12 more points to win 19-14.

The defense not only stopped the Mountain Lions with defensive tackling, Gavel and Pearsall both intercepted the Mountain View quarterback passes while playing defense.

Gavel intercepted Mountain Ridge’s quarterback Alex Hames one time with a 50-yard run back while Pearsall had two interceptions running the ball back a total of 35 yards.

The offense scored 12 points after Pearsall’s kickoff return with two field goals and an additional touchdown.

Kicker Emilio Echerivelscored a field goal with about three minutes left in the second quarter. The Aztecs went in at halftime trailing 14-10.

With three minutes to go in the third quarter, Echerivel kicked another field goal to narrow the margin to only one point with the Mountain Lions still leading 14-13.

Then midway through the fourth quarter, Helt hit Pearsall with a touchdown pass to give the Aztecs a 19-14 lead. Although Corona’s two-point conversion attempt failed they held on for their first win of the season.

Helt was able to complete 9 of 23 passes for 125 yards against Mountain Ridge. Pearsall had seven receptions for 111 yards and junior Eric Blackwellcaught two passes for 14 yards.

The Aztecs had seven players attempt to run the ball against the Mountain Lions with Helt gaining the most yardage rushing 27 yards on two carries. Senior Tim Luscombehad 12 attempts for 22 yards while Pearsall carried the ball five times for 13 yards.

Corona’s 35-20 loss to Basha on August 31 should have contained some positive points for the coaching staff to use in preparing the Aztecs for their game against Boulder Creek.

First, with less than a minute before the Aztecs would head into the locker room for halftime behind 21-0 to the Bears, Helt completed a 12-yard pass to Shaw for a touchdown.

Echerivel hit the point-after kick to make the score 21-6 at the half.

After some adjustments at halftime, Corona scored two more touchdowns in the second half.

Pearsall scored on a rushing touchdown midway through the third quarter in answer to a Basha’s fourth touchdown of the game. The extra point put the Aztecs behind 28-14.

The Bears scored again late in the third quarter to go up three touchdowns at 35-14.

The Aztecs played with determination in the fourth quarter when they marched down the field from their own one-yard line to score on a Helt pass to Jaron Revalfor the Aztecs third touchdown of the game with less than four minutes in the game. A failed point-after kick left Corona down 15 points at 35-20.

After a valiant effort in the fourth quarter including an onside kick attempt that failed, the Aztecs ran out of time losing the game 35-20.

Nicholas Schobinger, on the kicking team, punted the ball five times against Basha averaging over 30 yards per punt while Echerivel kicked the ball off three times, one resulting in a touchback.

The positive aspects for the Aztecs and their fans to take away from the Basha game is that someone besides Pearsall has now scored a touchdown which should take some of pressure off Pearsall.

Secondly, Helt threw 52 passes with 32 completions for a total of 247 yards against Basha which were spread out among eight receivers. Pearsall was the leading receiver with 11 receptions for 78 yards, but Blackwell caught six passes for 57 yards and Echerivel caught two for a gain of 25 yards.

Other players who caught passes include juniors Erick Brice, with three passes for 24 yards, Demetrius Rock with two passes for nine yards and Gutierrez with one pass for eight yards.

Lastly, Helt and Pearsall are starting to show their athleticism, versatility and leadership qualities their last season. Besides his ability to pass the football, almost 200 yards per game, Helt is the leading rusher on the team with 14 carries and 72 yards after three games. He also became a receiver when he caught a pass from Pearsall in the Basha game.

In addition, Pearsall has had two interceptions in just three games while playing on the defensive side of the ball.

Up next, the Aztecs play at Boulder Creek, Sept. 7 and then their last two non-conference games before playing teams in their 6A Central conference the last four games of the season.

On Sept 14 they will play at home against Desert Ridge and then at Westview, Sept. 21.

The Buffaloes have high hopes for this season with the return of their “pro-style” senior quarterback Nathan Clayton. Clayton, who now stands 6-foot-6 and weighs 215 lbs., broke his arm early in the 2017 season but continued to play until he was concussed the last game of the season in Tempe’s 27-16 loss to Marcos de Niza on Oct. 28, 2017.

Tempe started off slow in their first game of the 2018 season on August 24 at Apache Junction. The Buffaloes had to punt the ball on their first possession and then the defense gave up a touchdown to the Prospectors to fall behind 6-0 with less than seven minutes left in the first quarter.

On their second possession, the Buffaloes were four and out after gaining only one yard turning over possession on downs to Apache Junction.

The defense turned it up when the Prospectors were in the red zone threatening to score with less than four minutes left in the first quarter.

Tempe’s defense would come up with the first of its four interceptions returning the ball back to their own 35-yard line. 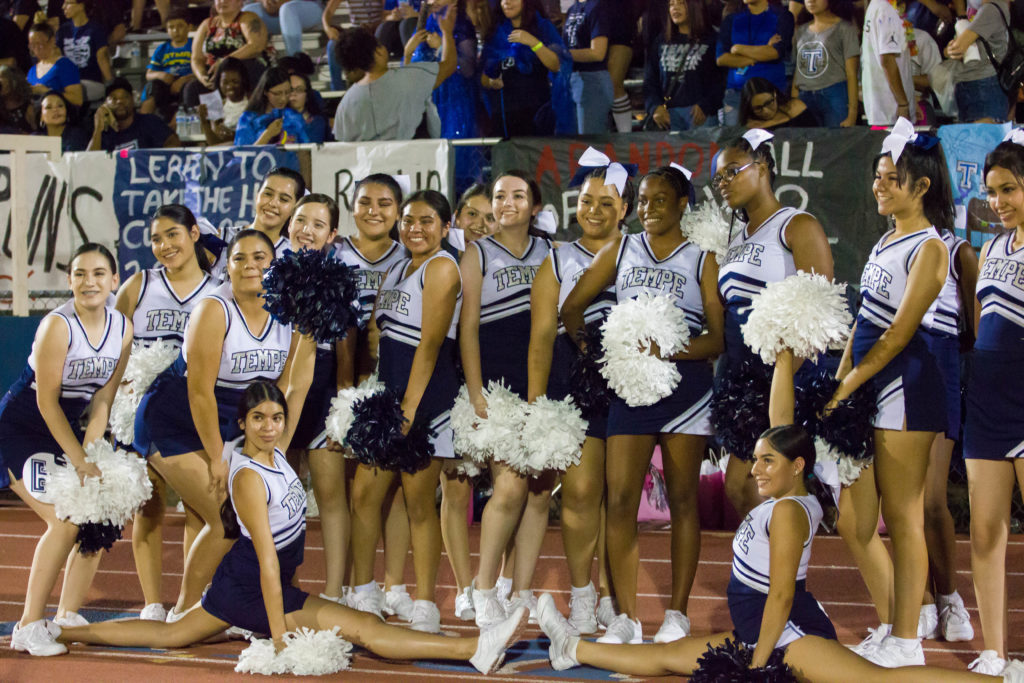 Getting a boost from the defense, the offense got into the game with a 67-yard pass from Clayton to senior Amari Rogersfor Tempe’s first touchdown late in the first quarter.

On the Prospector’s next possession, junior Javan Cooksgrabbed Tempe’s second interception in the first quarter setting up the Buffaloes second touchdown, a one-yard rushing touchdown by senior Pharoah Williamsfor a 14-6 lead.

Playing defense, senior Amaru Johnsonwould score a safety midway through the second quarter after Apache Junction intercepted a Clayton pass and took possession deep in their own territory. That defensive safety would give Tempe a 16-6 lead.

In the second quarter, Tempe’s Bayyan Princebroke through the Prospectors defensive line for a 22-yard run to Apache Junction’s 25-yard line only to have another one of Clayton’s passes intercepted on the next play.

It continued to be a roller coaster ride for both teams when Tempe’s junior Joseph Nearintercepted an Apache Junction pass with under a minute left in the first half, but the Buffaloes were unable to score before time ran out in the first half.

Tempe came out of the locker room at half time ahead 16-6 and never looked back. Pharoah Williams would score his second rushing touchdown of the night and the defense would hold the Prospectors scoreless to win their first game of the season 23-6. 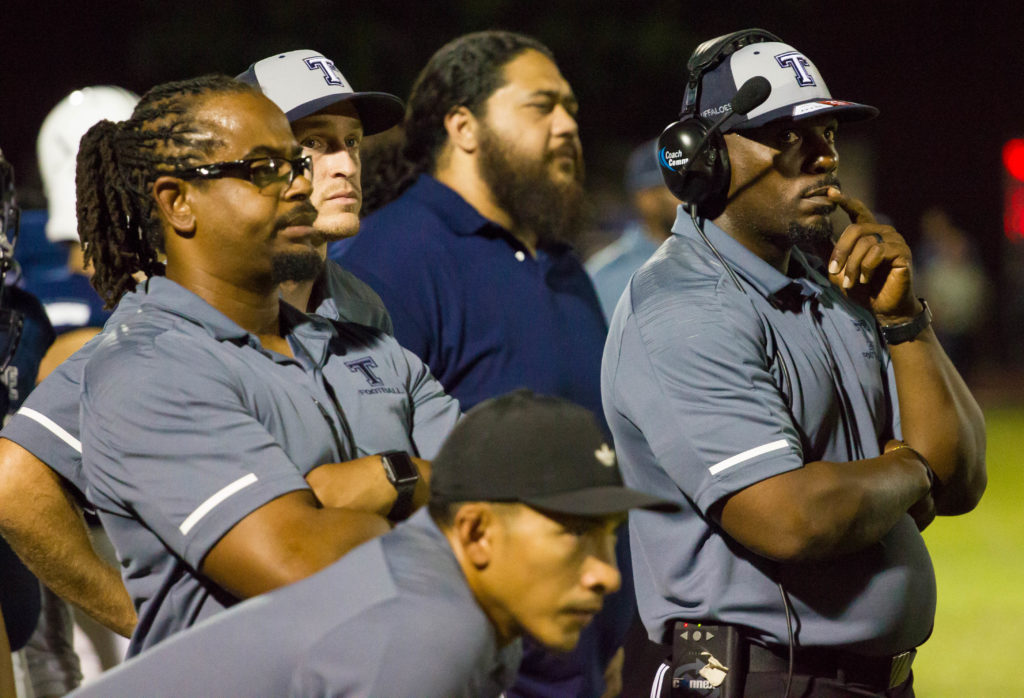 Prince was the leading rusher with 22 carries for 118 yards while Pharoah Williams carried the ball six times for 74 yards and two touchdowns.

Roger’s was the leading receiver with 90 yards on three receptions with one touchdown.

The defense had 5.5 quarterback sacks and four interceptions with Johnson leading the team with four sacks. Tonga’uiha had one sack and Williams is credited with a .5 sack.

In addition to Cooks’ and Near’s interceptions, junior Gus Willisand Rogers each had an interception against Apache Junction.

On the kicking team, sophomore Mathew Farnsworthkicked four kickoffs with his longest going 44 yards for a touchback plus he was three-for-three on his point after kicks.

Senior Quevion Baker-McCaulaypunted the ball three times against the Prospectors with his longest going 53 yards.

In their second game of the season, August 31, against McClintock, the Buffaloes were only able to score one touchdown in the third quarter by Prince losing to the Chargers 21-7. 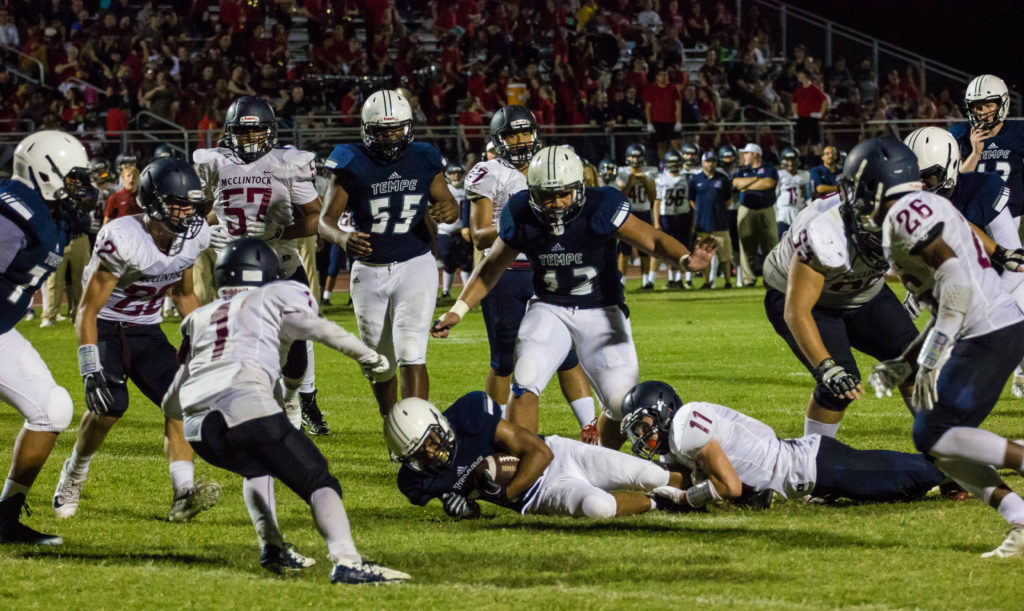 Clayton had a smidgen better outing against McClintock in his passing game completing 14 of 24 passes for a total of 155 yards including a long pass to Jodee Leetowards the end of the second quarter and two long passes to senior Juwan Jeffersonin the fourth quarter.

Juwan Jefferson was the leading receiver on the team with 93 yards on four catches.

Prince was the leading rusher on the team with 171 yards on 20 carries including his breakaway run of 41 yards to the Charger’s 8-yard line that set up his own ultimate touchdown in the third quarter.

Four Tempe players had six total tackles against McClintock with Isaiah Williams leading the team with six solo tackles. Tonga’uiha had five solo tackles and one assists while Leha had four solo and two assists and Near was credited with three solo and three assists.

Baker-McCaulay punted the ball twice for a total of 88 yards. His longest was 46 yards.

Up next, the Buffaloes will play on Sept. 7 a non-conference game at Flagstaff in the NAU Dome starting at 7:30. Both teams are 1-1 heading into this matchup.

On Sept. 14 Tempe will play a non-conference grudge match at Marcos de Niza and then will start conference play at home on Sept. 21 when they face off with Cortez, the first of six 4A Skyline conference opponents they will play the rest of the regular season.