Twelve young 10 to 11-year-old baseball players make up the 2018 Chandler All Star team chosen to represent Chandler Youth Baseball in the PONY National League tournament to be held July 18-22 in Walnut, Calif.

The goal of this Chandler All Stars team, who play in the PONY Bronco 11 Division, is to qualify for the PONY League World Series being held July 27-30 in Chesterfield, Va.

They have already played in one tournament, June 14-17 in Scottsdale. They will need to do well in this Walnut tournament to be able to play in the World Series.

The top 12 players chosen during the tryouts held at the end of the spring season include 11 boys and one girl.

William Bates, who wears No. 87, plays the pitcher and short stop positions along with No. 13, Jackson Durham, who is also one of the pitchers who also plays third base.

The team has two players who play the catcher position: No. 21, Jimmy Holloway and No. 3, Enrique Rannow. No. 18 Xavier Kellywood plays first base while No. 7, Jace Bernal, plays on second base.

Joshua Chappell, No. 42, plays in the outfield along with No. 8, Dylan Flores, and No. 10, Matthieu Pangan.

Chad Hartley, Bill Durham and Charles Chappell are the coaches.

Each team at the Walnut tournament is guaranteed to play a minimum of three games, even though it is a double elimination tournament. The games will be broadcast for listening only under the USA Zone Tournaments West Zone through the PONY website, www.pony.org. The brackets will be posted daily here.

This dedicated group of players and coaches are self-funded so donations are welcome through a Go Fund Me account or contact Honey Kellywood at 480-721-2802. 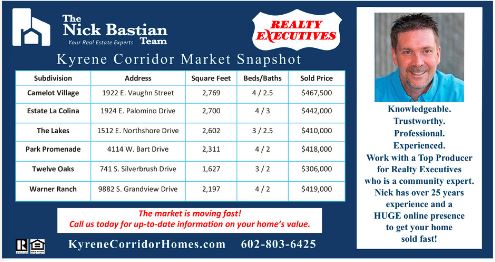 ASU was his first Pac-12 offer and he jumped on it based on the coaches, school and the accessibility of his family, friends and supporters to watch him play.

Pearsall, who averaged 15.6 receptions for an average of 115.3 yards a game, accepted ASU coach Herm Edwards’ offer on June 18. The 6-foot-2, 2005 pounds wide receiver became only the second in-state high school football player to commit to ASU for 2019.

Although Pearsall was the leading scorer on the team with 80 of the 200 total points Corona scored last season, he is probably remembered most for his break-out game against Gilbert on Oct. 18 when he had 14 receptions for a total of 342 yards, scoring five touchdowns or 30 points.

Football obviously runs in his genes. His father, Ricky Pearsall Sr., played at Northern Arizona University, where he was a Division I-AA AllAmerican as a kick returner in 1996.

Two players from Marcos de Niza, Torren Union and J.J. Hill, are on azcentral.com’s list of potential high school football recruits in 2019. Union, at 6-foot-1-inch, 175 pounds is a wide receiver and a defensive back for the Padres. Hill, at 6-foot-4-inches, 250 pounds, plays tight end, offensive line and defensive end at Marcos.

His journey has been an unexpected one, to say the least. The most recent reports have Peat, who currently only has two years left of Division I college eligibility, signing a letter of intent to play defensive end this fall at Virginia.

How this promising college football recruit ended up signing with Virginia three years after his college football career started is one for the record books. Peat, while a senior at Corona, verbally committed to play at UCLA in Oct. 2014 but continued to be recruited after having in-home visits from Michigan State and Texas A&M that fall.

In the spring and summer of 2016, Peat, who was changing positions from defensive end to defensive tackle, left the Michigan State program for personal reasons before the fall semester starts and returned to Arizona.

Peat then enrolled at Pima Community College but did not play football. He concentrated on his school work and staying in football shape with a personal trainer in order to play Division I football in the fall of 2017.

In the winter of 2016-17, Peat committed to UCLA to play football in the fall of 2017, but then Michigan State contacted him again. He visited the Spartans and recommitted to play in East Lansing instead of UCLA in 2017.

Peat was in the process of planning his move to Michigan during the summer of 2017 when the Spartans told him not to come. After scrambling around for another Division I university to recruit him to play football so he did not miss the 2017 season, Peat decided to play football at Scottsdale Community College, after visiting Indiana.

He did not want to go three years without playing a football game. Everything seemed to be looking up for Peat in September 2017. He was playing at Scottsdale, getting his academics in order and was ranked as the No. 7 overall junior college prospect in the nation.

He received scholarship offers from Oklahoma, USC, Louisiana Tech, Texas A&M, Houston and LSU, just to name a few. Unfortunately, Peat was able to play only two games at Scottsdale due to an injury.

Adding insult to injury, so to speak, he lost a year of eligibility by playing those two college games last fall. Then Peat’s former defensive coordinator at Michigan State took a job coaching at Florida State.

There was talk about a possible offer from Florida, but nothing came through. Then, on Jan. 28, Peat announced on Twitter that he is fulfilling a childhood dream of staying home to go to school and play football at Arizona State University.

The only catch, it appeared, was that ASU wanted him to walk on. No scholarship offer, that first year, anyway. On the weekend of June 3, the 6-foot-4, 280-pound Peat quietly signed a letter of intent to play at Virginia in the Atlantic Coast Conference which he announced on Instagram.

It has been a long up and down journey for the younger Peat, who should be relatively close to his older brother while playing at Virginia. Andrus is an offensive lineman who plays for the New Orleans Saints.