Where is my tough first newspaper editor when we need him? 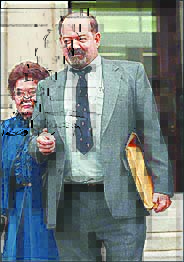 In my early days of the newspaper business, roughly around the start of the 1960s, there literally were hundreds of large, mid-sized and small dailies scattered around the L.A. area that would have been a worthy starting point for any aspiring journalist.

I was particularly lucky, being recruited while I was still in college by the great (and now, sadly, late) Lyn Nofziger, who was at the time managing editor of the Burbank Daily Review.

Lyn was not only the toughest newsman I would ever work under but perhaps the best editor a young reporter could possibly have hoped for.

Nofziger, who went on to serve two terms as communications director for then-Gov. Ronald Reagan and later as a respected strategist and PR man for Nixon and the Republican National Committee, gets much of the credit for the fact that I remain eternally optimistic about the future of newspapering and continue to do my (actually, our) little part to keep it alive.

If you follow the news as I do, or if you do nothing more than keep your eyes open as you walk through your neighborhood, it comes as no surprise that optimism isn’t easy to come by these days.

Even in the environs of L.A.’s sprawling megalopolis, where newspapers not only reported the day’s events but whose publishers exerted a powerful grip on virtually every aspect of our lives, fewer and fewer of those proliferate as they once did.

That, of course, includes the venerable Los Angeles Times, part of the massive Times-Mirror juggernaut, where I also spent time as a reporter. It was, we all knew in those days, a journalist’s premier job, partially because of the prestige factor, partially due to the generous salaries that always exceeded those offered at union shops under the aegis of The Newspaper Guild. Not to mention knowing that we were part of a highly dedicated news staff with perhaps the highest morale of any newspaper in the state.

That was then. In recent months The Times has seemingly unraveled in many ways: circulation, influence, management and morale, followed most recently by unionization of the newsroom.

Is these turns of fortune, then, the newest recipe for a major newspaper’s decline? Whether the same path to demise can occur elsewhere—most notably in our own community—is no more predictable here than anywhere else.

While we don’t see a similar scenario unfolding in the Phoenix metro area, it is obvious that newspaper publishing today is altogether different than it was in my early days. I worry that if we were to see a diminishing role of our oldest and best known purveyor of news, a void of colossal proportion would be left in our ability to know what is going on around us.

I understand, of course, having been here 40 or so years, that not everyone likes how some of our local media outlets present the news.

I’m sure those sentiments were alive and festering even during the 1960s and thereafter, in my time as an upstart reporter. But we cannot survive as a free society without a skilled body of journalists who, despite their sometimes human frailties, constitute the only way we have to be informed about the vital issues of our day.

The small staffs inherent in publications like ours can’t do it. Neither can the slew of
bloggers, Tweeters or those with no motive other than to sow dissent.

Moral to this column:
If you’re not subscribing to a major daily newspaper—do I have to offer a suggestion?—do
it now.

Our community, and the one that will unfold for future generations, depends on it.

Don Kirkland
Don Kirkland realized in elementary school that his future would revolve around the written word. His first newspaper job was with a small L.A.-area daily whose publisher demanded the kind of journalistic integrity that ultimately led him to be the admired press director for both a governor and a U.S. President. Don later was employed by Times-Mirror Corp. and, in Arizona, was executive editor of the Mesa Tribune after its purchase by a major East Coast chain. He founded Wrangler News 30 years ago and has dedicated his work to preserving the vital role of community newspapers.
Previous articleHow to relive some of railroading’s ‘Glory Days’ — all fun, no charge
Next articlePassionate about their work . . . and willing to share