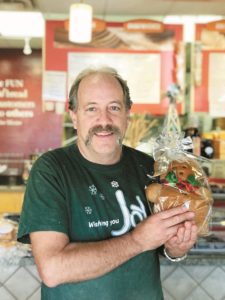 Ever wonder what drives people to do ‘crazy’ things like skydive over an active volcano, hike Mt. Everest, run 20 miles on a crisp Sunday morning, or wake up every single day at 1:10 a.m. to bake delicious whole-grain bread? One could speculate wildly, but the best way to understand that specific mindset is to simply ask.

In this case, let’s talk bread with the man who miraculously wakes at a time when most night owls are casually slipping into dreamland.

Who is this man?

He is the dedicated baker behind every beautifully crafted loaf of bread.

As the Walston’s quickly approach their decade anniversary of owning the beloved establishment, let’s rewind to the days of less yeast and more sleep.

Walston got his start at DeVry University in Phoenix in the late 70’s studying electrical engineering. He then moved farther west to Southern California to work for a military subcontractor for 10 years, where he met the love of his life, Leslie.

Fast forward four years to their wedding in Salmon, Idaho in 1988.

Two years later and the couple happily accepted the opportunity to own and operate a local hardware store, Coast to Coast. The hardware-store lifestyle courses through Ward’s veins, seeing as his grandfather owned a hardware store in 1943 that was passed on to his father. The Walston family just recently left the industry in 2016 after 74 years.

Two kids and 10 years later the Walston’s decided it was time to lay down the tools in search of a new venture. Ward found himself an opportunity working for a reputable contractor and friend, Jim Bob, with Ray’s Heating.

After nine years being appointed as the “go-to guy” in the business, Ward decided it was time to return back to his true calling as an enthusiastic member of the self-employed world.

Now, cue the appetite to own a business paired with visions of baking warm, delicious bread.

“We both agreed we needed to be self-employed again and we knew it had to be a happy business,” Ward says. “So we did our research and found that this location was up for sale from a nice, retired couple who built this place from the ground up.

We didn’t just buy a bakery; we bought the Great Harvest name.” 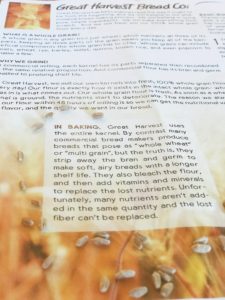 The Walston’s along with son’s George and Floyd, moved to Arizona in July 2008, and by the first of August they were officially the new owners of Great Harvest Bread Co.

They haven’t looked back since.

According to Ward, a big part of the Great Harvest culture is to be community oriented.

“We love being able to be apart of community events, local markets, and donating whenever someone is in need. Over the years we have been able to donate to food banks, churches, and many local schools,” Ward says. “We have quite a following here. We’ve watched some of our regular’s kids grow up. It’s incredible.”

Ward adds: “99% of the people that walk through our doors are happy.”

So what does a typical day look like for Ward?

Once he rises and walks out his front door, he enjoys a relaxing cruise on his motorcycle and arrives at the bakery by 1:45 a.m.

By 2 a.m. sharp the first bread has begun mixing, and each batch is a five-hour process. A secret ingredient to the success of Ward’s morning schedule is his Circle K hot dog ritual at 4:10 a.m. every morning.

The gas station snack readies him for the start of the kneading process at exactly 5 a.m.

“I am a stickler for quality,” Ward says. “The bread has to be good every single time and that’s the commitment I think is absolutely necessary here. If our goal is to continually offer fresh, hot bread all day long, then that’s exactly what we’re going to do.”

The local establishment currently employs 11, including both of Ward’s sons.

“We are definitely unique,” Ward says.

“We use all natural ingredients, fresh yeast, and stone ground wheat. No oils, no high-fructose corn syrup, and no conditioners are found anywhere near our bread. The secret is that we use fresh ground wheat berries and honey. We buy our wheat from Golden Triangle, Montana, which is known for having the best wheat in the country. It helps us stand out from the rest.”

Ward has come to realize over the years that it’s the little things that leave the biggest mark.

“You know what gets me? Watching someone try a slice of our bread for the very first time and seeing that light bulb moment slide across their face,” Ward says. “I can’t help but smile because that’s when I know it’s all worth it. I want this to be the highlight of people’s days, otherwise I’m disappointed.”

Despite how rebellious his schedule may appear to some, Ward defends his motivations to continue his daily duty with sound reasoning.

“I believe in what I do and I love the interactions with customers,” Ward says. “When people say ‘this is the best bread ever’ it really motivates me to keep doing what I’m doing. I plan on working here and baking bread for as long as my body will allow me to. As long as I have the opportunity to work side by side with both of my sons and my wife, I will.”