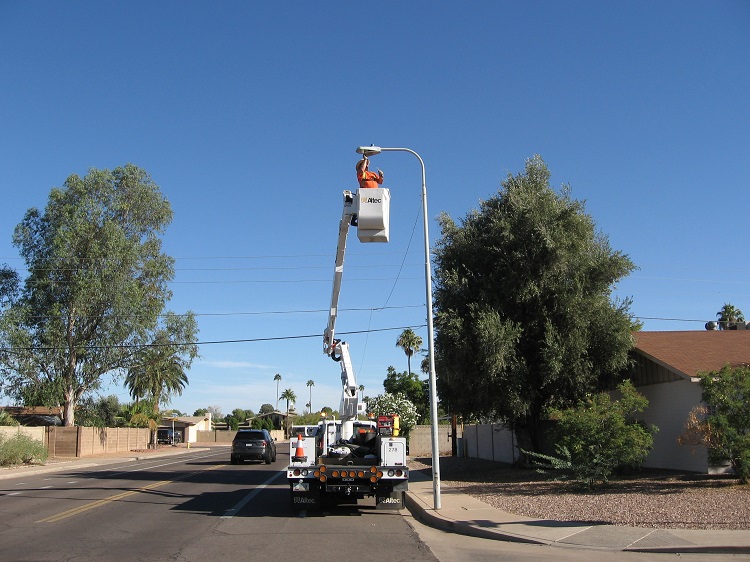 During the last few years, LED lighting has been popping up on store shelves everywhere; now, in case you hadn’t noticed, it’s bringing a bright new look to your neighborhood as well.

Tempe crews are systematically making their way through local streets, working toward installation of new pole-mounted lights during a 4-year program designed to replace the old-style sodium and mercury-vapor bulbs that were installed years ago.

Isaac Chavira, the city’s transportation maintenance manager, says the process is moving on schedule, with about a quarter of the 4,000 bulbs already installed.

For many reasons, according to Chavira, switching to LEDs was definitely a bright idea.

While the previous mercury-vapor and high-pressure sodium bulbs had a limited lifespan, the new LEDs can last as long as 100,000 hours or, if you do the math, 15 to 20 years.

Although the city originally began studying new lighting technology in 2008 as a way to increase both staff and energy efficiency, the LED concept was then still in the development stages. Additionally, many so far unproven distributors had jumped on the LED bandwagon, and the U.S. Department of Energy was watching cautiously as municipalities worked to find the best type of bulb available for their specific needs.

Particularly in the Valley, planners wanted to be sure that any lights selected would be able to withstand the summer’s heat so that each bulb’s lifespan wouldn’t be affected by extreme ambient temperatures. Technology now built into the system enables heat buildup to be more evenly dissipated, thus reducing the likelihood of early failure, according to Chavira.

As to how Tempe residents are reacting to the newfound brightness in their neighborhood, Chavira says, of the nearly 1,000 bulbs installed so far, only a couple have asked that baffles be installed to limit the amount of light coming into their yards from light poles installed on streets in front of or near those homes.

For others who may find the new neighborhood brilliance a bit more intense than they’d like, city crews will happily put covers in place, said Chavira, provided of course they don’t interfere with the installation’s main function: ensuring that the street is adequately lighted.

What to expect if your neighborhood hasn’t yet been visited by the installation crew: A crisper, brighter light compared to the yellow cast of traditional sodium lights, providing greater visibility for pedestrians, bicyclists and drivers.

Finally, Chavira noted, the new lights are compliant with guidelines of the International Dark Sky Association because they direct light downward, eliminating most of the uplight. They have about half the wattage of the existing lights and produce less reflective glare, he added.