Dino Debut: Hey, neighbor, can you dig it? 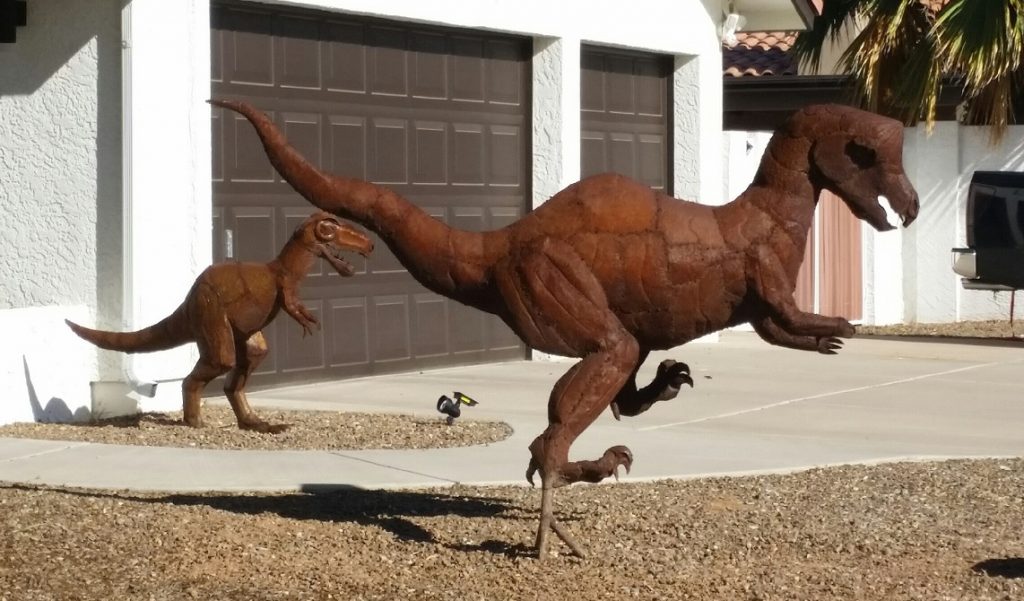 In its unending quest for stories wonderful and (occasionally) weird, Wrangler News unearthed two seemingly ferocious creatures that have taken up residence in the front yard of an otherwise serene South Tempe neighborhood, which until recently reported very few remnants of the Triassic Era.

Rich Bowman, who owns the dinosaur duo that stand menacingly on guard, said he is neither a paleontologist nor the parent of a 4-year-old.

Bowman captured the prehistoric guests when he spotted a 20-foot-tall Tyrannosaurus rex in front of a local home décor business. Inside the place, he found more of the bone-crunching creatures—albeit smaller, somewhat less threatening versions. Still, these are not your traditional garden gnomes.

“I stopped in and looked at ‘em, and I was like, ‘You know, those would look neat in our front yard.’”

The metal-clad reptilians took up their positions last month, protecting the Bowman abode alongside a curved walkway that winds past a three-car driveway. At press time, their owner said no one so far has had a bone to pick over the archeological array.

“We’re getting a lot of doubletakes,” Bowman admitted. “Some people drive by real slow and they kind of have a big smile on their face. Others just kind of shake their head.”

The Bowmans aren’t the only residents who’ve taken to embellishing their environs, though no others have gone Jurassic. Yet.

“So far, nobody’s complained or anything, which is good,” offered Bowman.

Out in Goodyear, where he formerly lived, dinosaur denizens faced the fangs of a homeowners association, unlike this neighborhood, where free speech and good taste (minus the  sometimes dreaded HOA) run free.

“We would consider it art,” he said, “and there’s nothing the city would do with respect to enforcement.”

The mini-T-rexes are anchored to the ground and show no signs of becoming extinct. For now, at least.

Joyce Coronel
Joyce Coronel has been interviewing and writing stories since she was 12, and she’s got the scrapbooks to prove it. The mother of five grown sons and native of Arizona is passionate about local news and has been involved in media since 2002, coming aboard at Wrangler News in 2015. Joyce believes strongly that newspapers are a lifeline to an informed public and a means by which neighbors can build a sense of community—vitally important in today’s complex world.
Previous articleTempe Diablos hosting Grammy winning KC band
Next articlePrint Edition – April 1, 2017