Mounted patrols trot fearlessly where others dare not tread

Just as did many police officers during their early days on the force, modern day cop Stephanie Braxton has a partner when she patrols Mill Avenue on weekend nights. But her backup in this case is a four-legged one, and his name isn’t Fido.

Officer Braxton’s steadfast, not-to-be-messed-with partner is a 2,000-pound gelding named Ranger, who she says is the perfect companion for what she calls her dream job.

“My whole life, ever since I was a little kid, I’ve been riding horses,” Braxton said. One of two full-time mounted police officers for Tempe, Braxton said she’s been in this—the “perfect” job—
since 2007.

If having equestrian blood flowing in one’s veins seems a rarity, Braxton insists she’s not the only one who has a love for horses.

Lt. Michael Pooley, who oversees Tempe’s metro bureau, said he hopes to one day train for the mounted patrol. Tempe is one of few departments in the state to still have such a unit, he said, alongside Scottsdale and the Maricopa County Sheriff’s Office.

“Basically, what we use them for is crowd control,” Pooley said.

“One of the biggest reasons is the number of special events we have. Tempe has over 350 (of those) a year that draw thousands of people.”

Mostly, the event-goers are well-behaved, Pooley said, “but there are times when crowds get large and out of control. They do things they shouldn’t be doing.”

That’s where the horses come into play.

The department has seven of the equestrian beauties, stabled at Kiwanis Park. A mounted officer holds the manpower and capabilities that could be considered equal to that of six non-horseback officers, Pooley said.

“When a fight breaks out, that’s our time to shine,” Braxton explained. “We blow our whistles, we yell, so they should hear us coming–they should back up and stop fighting and walk away from the fight before we even have to touch them.”

If the rowdies won’t quit, Braxton and Officer Dave Claridge nudge their way into the crowd—a crowd that is often egging on the fight. 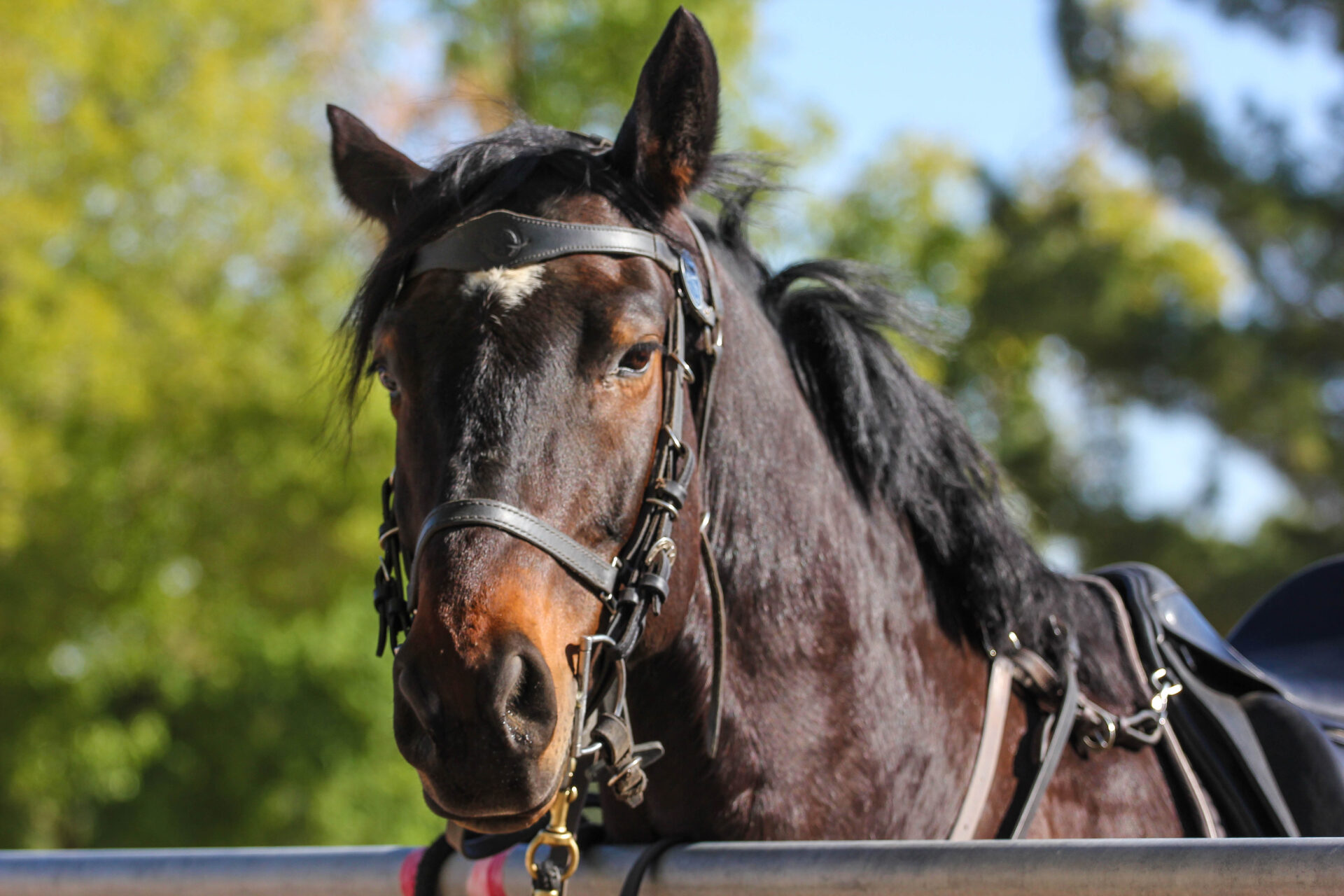 “We use the horse’s shoulders, the horse’s head, the horse’s hip,” Braxton said. “We make a hole and make it safe for those bike officers to come in.” That’s when the other officers are able to separate fighters from each other and keep things from escalating.

“We really take honor in protecting the bike officers because they are down on the ground. They are eye-to-eye with the suspects.”

At family friendly events, Braxton said adults with children often admire the horses, petting them as they ooh and ah over the spectacle. Friday and Saturday nights on Mill Avenue are a different matter.

“There aren’t kids out there—they’re oftentimes intoxicated adults, and when one person pets, then everybody wants to pet and we just can’t,” Braxton said.

“A lot of people know us and respect us and they’ll tell their out-of-town friends, ‘Don’t touch the horse. He’s an officer—you can’t touch him!’ So that’s kind of neat.”

A group of 18 volunteers help the mounted unit by cleaning the stalls and tack and grooming the horses.

The prized animals are largely draft crosses, geldings, but never stallions. “If it wasn’t for our Tempe residents, we wouldn’t be able to survive,” Braxton said. “We rely on them so much and they love the horses just as if they were their family members.”

Braxton said her work with the horses is the fulfillment of something she’s wanted to do since she was 12. “Just being able to have the most reliable, caring, kind partner in the whole entire world—they will go into battle without questioning it. They are the most courageous animal that I can think of. They trust so much.”

Pooley said the mounted unit also patrols neighborhoods from time to time. “You don’t see a horse walking around your neighborhood very often. So it gets a lot of attention.”

Mounted officers are graduates of the Police Academy and certified officers, Pooley said, and the mounted unit is something in which the department takes tremendous price.

“These are beautiful horses and they’re great for police work,” said Pooley. “They really give the Tempe Police Department something that stands out about it.”

Joyce Coronel
Joyce Coronel has been interviewing and writing stories since she was 12, and she’s got the scrapbooks to prove it. The mother of five grown sons and native of Arizona is passionate about local news and has been involved in media since 2002, coming aboard at Wrangler News in 2015. Joyce believes strongly that newspapers are a lifeline to an informed public and a means by which neighbors can build a sense of community—vitally important in today’s complex world.
Previous articlePrint Edition – December 3, 2016
Next articleRefugees, fleeing war, find respite among Valley’s welcoming families