When you’re four feet tall and full of energy, you might be able to build a castle or a pirate ship before lunch.

That’s what students at St. John Bosco preschool are discovering as they enjoy innovative new equipment that’s helping them learn and develop their minds. The inventive materials were added to the school this fall and on a recent Wednesday morning, the children were busily putting them to good use after coming in from their morning recess.

Up near the front of the classroom stood an array of numerous dense foam building blocks of assorted sizes and shapes. It’s up to the kids to decide what they want to create with the blue blocks and they immediately began stacking and arranging them. After a few minutes, a castle and fortress emerged.

Colleen Johnson, who’s in her fourth year as the pre-K teacher at the school, listened patiently as one girl explained that her creation had been obliterated. An exuberant classmate knocked it over. “You need to use your words to tell him how you feel about that,” Johnson told her. The child went back over to the group, talked it over and started piling up blocks again.

“This teaches them gross motor skills, working together, communication skills and then just thinking, almost like an engineering concept,” Johnson said. “How can we build something? How can we accomplish something? They’re trying to figure it out.”

“They learn how things physically work, problem solving, how to build something without someone telling them how,” Johnson said, raising her voice just a tad over the joyous din. At times Johnson and her co-teacher, Michelle Palomo, take the blocks over to the multi-purpose room where the students have even more room to spread out.

“We’ve brought them all over to the MPR and divided them into five teams,” Johnson said. “There will be a team captain and they all discuss what they want to make. They all work together.”

In another area of the classroom, there’s a sizeable magnetic board for yet more hands-on play. Students have a ramps and slides that stick to the board which they arrange in various ways before they drop a ball through. 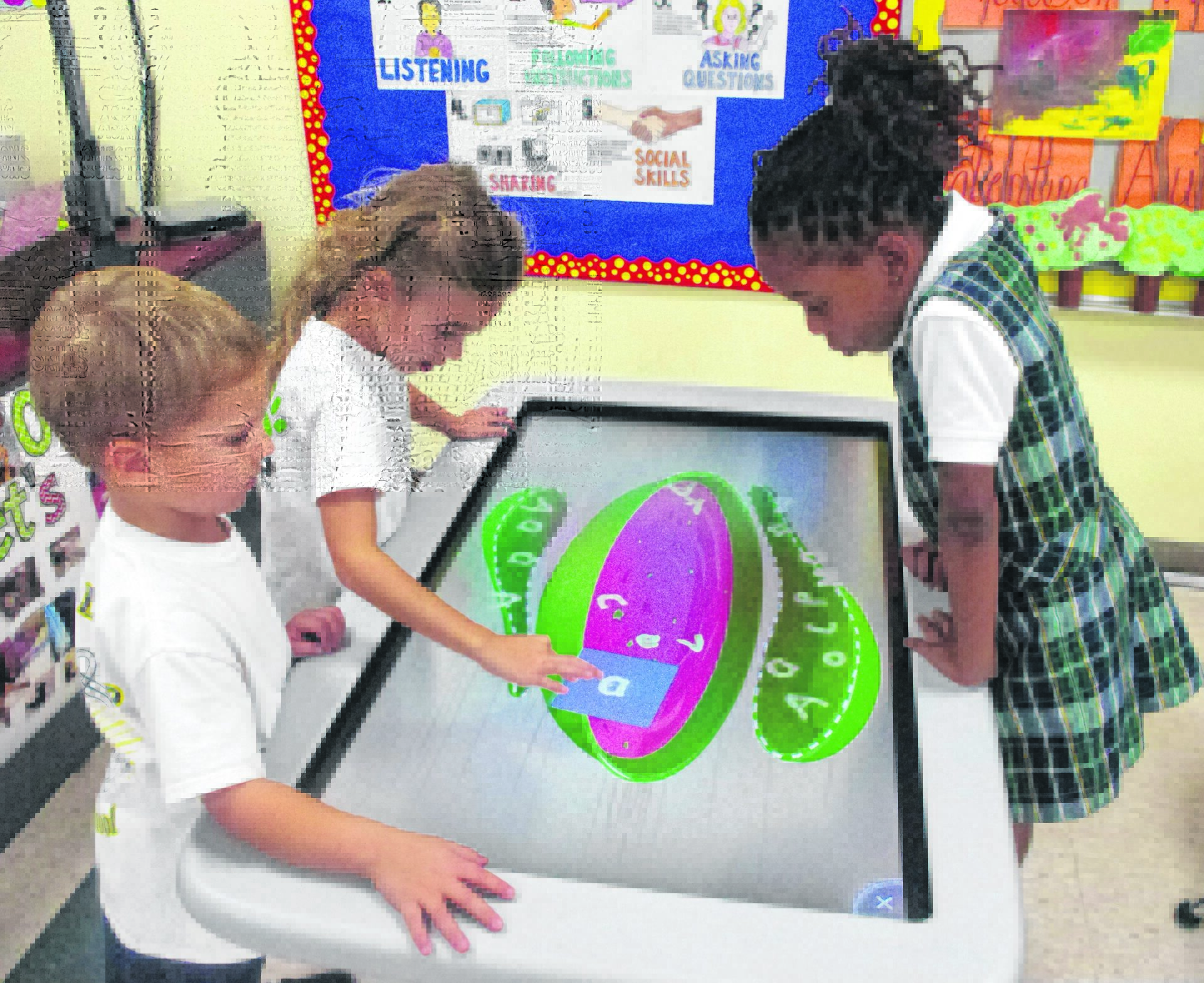 Another group of students gathered around a smart table that operates like a giant iPad.

“Kids this age, they learn more this way, by moving and touching and manipulating and not us steering them and telling them what they have to do. This is the way their brain is figuring things out and learning,” Johnson said.

Rosemarie Zibelman’s son, Hudson, is in the class and she said he and the other children are enjoying the new equipment. Zibelman, president of the PTO, also has a daughter who was in the pre-K program last year.

“I think it’s way more interactive than it has been other years,” Zibelman said. “They’re more eager to learn, more motivated. They just they get these things out and they’re like little engineers, little architects. They want to build things, they want to see how they work. I think it helps that problem-solving, critical thinking part of the brain.”

St. John Bosco School is a pre-K through eighth grade school with 430 students enrolled. The school was established in 2001. Enrollment is open to children from all faith traditions, Catholic and non-Catholic alike.