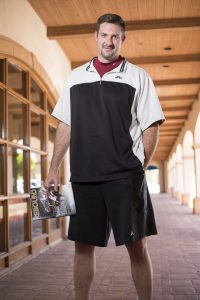 To rebound, in basketball, is to regain possession after a missed shot. So, intentionally or not, the term may carry a hint of symbolic meaning as the title of a magazine for retired basketball players.

In a sense that goes beyond the court, Rebound is about getting the ball back in your hands.

Now in its third year, Rebound is, in the words of founder Matt Fish, “the NBA-approved official magazine of the National Basketball Retired Players Association.” A quarterly, it’s intended, says Fish, “as a resource for the members of the Association, just to show what resources are available to them, and to help them transition from the days of playing to the days after playing.”

It’s a transition with which Fish is quite familiar. He was a professional basketball player for 10 years, logging stints with the L.A. Clippers, the Denver Nuggets, the New York Knicks, the Washington Bullets and the Miami Heat, as well as teams in Canada, France, Poland, Portugal and Argentina.

“I was the guy who came off the bench, who backed up the backup, for the Miami Heat when we made the conference finals,” Fish recalls. “On the other hand, I was a starter for the Clippers in ’94, when we couldn’t win a game to save our lives. So I don’t know…I love to play, but I love being successful, so it’s tough.”

The years after were tough, too. Not only did he have to adjust to retirement himself, he’s also seen its impact on other players:

“These guys make millions, and they’re bankrupt in four years.”

Against this sort of unhappy outcome, Rebound is intended to serve as a source of information regarding business opportunities, jobs, community service possibilities, coaching positions and so forth. It also offers encouragement and celebration of the post-playing accomplishments of the NBRPA’s membership.

One might reasonably wonder, however, if that narrow demographic, by itself, constitutes a large enough readership to support a magazine.

“There’s only about 1,500 former NBA players in existence,” concedes Fish, a Valley resident whose stepson Justin Kelley played basketball at Corona del Sol High School. “So we’ve opened it up to former WNBA players, Harlem Globetrotters players and players from the old ABA [American Basketball Association; 1967-1976].” One hopes that Rebound would also welcome the readership of former Washington Generals, perennial losers to the Globetrotters. Those guys could use some cheering up.

But even with all of these players included, that would still amount to a circulation significantly smaller than that of, say, Wrangler News.

Fish, of course, would like Rebound to appeal to fan readership as well—he refers to it as a publication “By a Player, About The Players, For The Players and Fans.”

“It’s a human interest magazine, showing Where Are They Now,” he says, with features like We Made This Game and Conversations With Fish.

“People can say, ‘Oh yeah, I remember when he was playing. I wonder what he’s doing now?’”

Even so, Fish admits that his magazine is “really costly to print,” and he wants to move it increasingly into the digital age—and also to the video screen; he’s currently working on a TV version.

He’d also be interested in developing the same idea for the other major sports, although he notes that “I don’t necessarily know the verbiage of the other sports like I know my own. But I know we [retired players] all suffer from the same issues.”