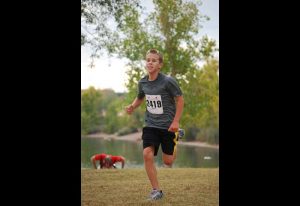 It may be too early to predict, but Corona’s cross-country program could have another budding long-distance runner in the pipeline in Slade Sumners.

Slade, who finished first in his age category in the San Diego Rock ‘n Roll Half Marathon as a 12-year-old, 69th out of over 17,000 runners, completing the 13.1 miles in 1:24:59, will be an eighth grader at Aprende Middle School this fall.

Although Slade’s first organized running did not start until he joined Aprende’s cross country team as a sixth grader, he was inspired earlier by an event familiar to most Arizona residents: Pat’s Run.

“Pat Tillman initially inspired me to run,” said Slade. “Now I love running because I feel like I’m in my own world when I run. It makes me feel like I can do anything I set my mind to.”

“Pat’s Run somehow ignited a passion in Slade for the sport of running,” said his mother, Cheryl Sumners. “He became interested in running long distances and has never looked back.”

Corona has already taken notice by inviting Slade to train with the high school runners the last two summers. Slade’s goal his last year at Aprende is to finish in the top five at the state middle school meet later this fall.

His long-term goals include running in both high school and college.

Although Slade’s parents were both active in team sports growing up, his long-distance running genes may have been passed down by his paternal grandfather.

“My dad was a runner,” said Slade’s dad, Scott Sumners. “He was a teacher in a small Oregon town where I grew up. He ran five miles to school every day plus he participated in 5k, 10k and marathon runs.”

Slade’s dedication to running has had an impact on the whole family including his younger sister Sara, who plans on participating in cross country this fall as a sixth grader at Aprende.

“Slade has already started training her for running cross country this fall, including setting running goals,” said Cheryl. “He wants her to finish strong and in front.