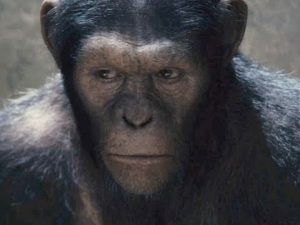 Of the many geeky enthusiasms of my boyhood, that for the Planet of the Apes movies was second in intensity only to Star Trek.

So despite the disappointment I, like many fans, felt over Tim Burton’s 2001 version of Apes, I was still childishly excited about the new film, Rise of the Planet of the Apes, which opened to big box-office last weekend.

This time, I wasn’t disappointed.

As in Conquest, the script of Rise, credited to director Rupert Wyatt and Amanda Silver, depicts the political awakening of a chimpanzee named Caesar, here a lab animal with a brain modified by a drug intended to cure Alzheimer’s disease.

After the pharmaceutical corporation causes the death of his mother, Caesar is surreptitiously raised in the comfortable suburban San Francisco home of the scientist (James Franco) heading the project, who soon sees that he’s got a super-chimp on his hands.

But misfortune strikes, and Caesar ends up in a hellhole primate shelter, run by a jerk (Brian Cox) with an ape-hating, sadistic son (Tom Felton).

It’s here that Caesar becomes a sort of Chimp Guevara, uniting his fellow apes (except for gibbons; they don’t seem to be included) against The Man.

As with the old films, and for that matter with King Kong, the subtext of White racial paranoia in all this is so feverish that it can barely be called subtextual. But the ugliness implicit in it is offset by a generous side:

On another, lightly subversive level, the Apes movies are underdog stories—or, if you prefer, under-ape stories—and every kid I know always rooted for the apes to prevail.

In Rise, Wyatt stages a fine, rousing finale, a showdown on the Golden Gate Bridge between the liberated super-apes and the California Highway Patrol that’s highly satisfying.

If this synopsis makes you giggle, be assured the movie will too (though it’s too full of cruelty to animals for most younger kids and sensitive adults).

Wyatt doesn’t take the material any more seriously than is necessary to avoid overt camp, and the film is full of in-jokes and bleak comedy.

James Franco’s charisma continues to elude me, but that’s OK here, and his glumness is compensated for by John Lithgow, touching as his dementia-afflicted father, and even more so by Andy Serkis, who “plays” Caesar behind the computer-generated imagery.

The bright-eyed, calmly incredulous, oh-no-they-didn’t anger that registers on this Everychimp’s face is deeply funny.