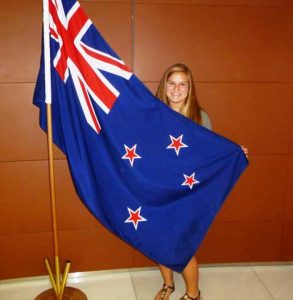 Webster is an NCAA Division III school with 5,000 students that competes in the St. Louis Intercollegiate Athletic Conference (SLIAC) with eight other member institutions in the Midwestern United States.

“I decided to go there because I liked what the school had to offer and I wanted to play tennis for a few more years,” said Hacker. “The area is also really beautiful and so completely different from Arizona where I grew up.”

Hacker decided to major in International Relations with a minor in French partly because of her experience in Tempe’s Sister City Exchange Program. She was selected to the program in March of 2010 and spent five weeks living with a family in New Zealand last summer.

“I had initially chosen three countries, New Zealand, France and Macedonia respectively,” said Hacker. “I was ecstatic when I found out I was picked to go to New Zealand because I had heard so many great things about it and I felt its outdoorsy atmosphere would suit my personally perfectly.”

Hacker landed in New Zealand June 3 to stay with a five-member family who lived in the beautiful green countryside outside of Lower Hutt, a short train ride from Wellington.

“The father was a baker who owned a bakery. The mother was an accountant and their older daughter was studying to be a policewoman,” said Hacker. “They also had a 15-year old son, Mate, and daughter, Britt, who was my exchange sister.”

Hacker was able to travel all over New Zealand while staying with her Sister City family. She went from the South Island all the way to Auckland visiting museums and shops along the way but touring the New Zealand Parliament holds special memories for her.

“Meeting the Prime Minister and getting into the debating chamber when I toured Parliament helped me understand the political side of New Zealand,” said Hacker. “Talking candidly to John Key, the Prime Minister, really opened my eyes to an entirely new world.”

In addition to learning a great deal about the historic, cultural and political sides of New Zealand, Hacker had a great deal of outdoorsy fun.

“I did a ton of extreme adventure activities including the Zorb, luge, Swoop, skiing and my favorite, bungee jumping.”

She also learned a great deal about herself that she hopes will help her adjust to college life away from home.

“While in New Zealand, I discovered that I was able to adjust to a new way of life away from my family,” said Hacker. “I was able to handle being in a foreign country without missing the comforts of home, an experience that will come in handy when I’m away at school this fall.”

Hacker was able to help her Tempe Sister City sister, Britt, learn about the United States later that summer.

“Britt, an all-around athlete competing in similar sports as girls in the U.S., stayed with me and my family for five weeks last July and August,” said Hacker. “Before she arrived, Britt thought the U.S. was going to be big, busy and hot. Although she found Arizona hot she liked a lot of things about Arizona including the swimming and shopping.”

“Britt went back to New Zealand realizing that there are many similarities between not only her country and mine but also between Americans and New Zealanders.”

Going to New Zealand was a once in a lifetime experience for Hacker but one that may lead to many more after she was inspired to go into International Relations based on her Tempe Sister City experience.