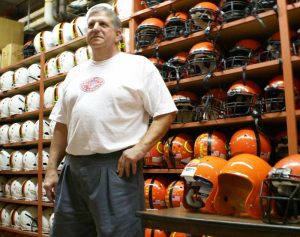 Corona del Sol football players got a chance to meet their new coach when Tom Joseph was introduced to his players and parents at an introductory meeting.

In the meet-and-greet, Joseph, who accumulated a 92-23 record during nine years as coach at Mesa Mountain View High School, laid out his plans and expectations.

Hard work and attention to detail have always been high priorities, he said. His message to his players was to expect hard work but to look forward to great rewards.

“This is going to be the most mentally and physically trying time of your life, as well as one of the most rewarding experiences of your life,” he told his players. “Expect to be challenged in everything you do.”

Joseph said he’s excited about his new job as the Aztecs’ football coach. His enthusiasm was obvious as he made his way around the room, shaking everyone’s hand after the meeting. He took the time to personally speak with all of his players who showed up for the session.

He outlined his expectations and gave the players a chance to ask him questions, as well.

A few characteristics that stood out in favor of Joseph’s hiring, said Corona Athletic Director Dan Nero, were his experience, history of winning, character and communication skills.

Character, said Nero, was the No. 1 reason he was hired.

“We’re really excited to have Tom on board. He’s got a lot of experience in high school football,” he said.

“So far the parents I’ve talked to have been very positive and supportive…very pleased with our choice. I think that when they see Tom in action with their young men, they’re going to see a guy who really has the kids at heart.

Joseph said working toward rebuilding a football team that finished 1-10 this season begins right now. He doesn’t want to waste any time. The Aztecs began weight training Jan. 20. Joseph said the team has to prepare physically for the season right now.

As of now, Joseph said, he’s ready to do just that. He’s working on putting together a staff, learning his personnel and installing new offensive and defensive schemes.

“I just want to get going on stuff,” he said.

Joseph said hard work and preparation will be the keys to a successful season at Corona. He said working hard has always been his calling card. He is expecting his football team to adopt his approach, as well.

“Be ready to work hard. That’s my philosophy. I’m moving. The train’s going. Get on board. I’m a doer. I don’t have much to say. Let’s get working,” he said.

“Be ready to work hard. I don’t know any other way to do things. It’ll be exciting.”