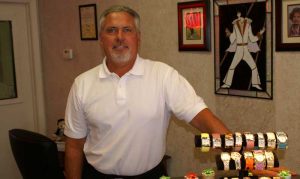 By all rights, Dave Kendall could have cashed out on his longtime, successful jewelry business before the economy headed south two years ago. That would have ended, sadly but understandably, a family tradition that had spanned two generations and brought him literally thousands of customers since he opened Day’s Fine Jewelry almost 20 years ago.

But he’s still plugging away, with no signs of throwing in the towel on a business he loves, even though there were days in the last couple of years when his biggest sale might have been a $6.50 watch battery, installation included.

Sandwiched unremarkably between a postal store and a Mexican takeout in the Fry’s Center at McClintock and Guadalupe in south Tempe, the shop has become a gathering spot for dedicated followers and a go-to destination for new customers who’ve heard about Kendall’s trademark sociability.

And, of course, his reputation for a customer-friendly approach to his profession, founded on the principles he learned from his dad during his childhood days in Kentucky. That’s where Kendall got his first taste of the industry during after-school and weekend stints at the small, family owned jewelry store in his hometown.

When he moved to Tempe in later years, Kendall naturally gravitated to what he knew best, rising through the ranks at a large, national retailer, Service Merchandise, that generated throngs of customers, particularly those in search of quality jewelry at affordable prices.

That was the store on Southern Avenue in Mesa, one of the early heavy discounters and a forerunner of aggressive pricing strategies that many others came to follow in the years thereafter.

He recalls in particular the holiday seasons, when so many customers found their way to the store that he had to beef up his sales staff to more than 30, all of whom were quickly indoctrinated into Kendall’s buyer-welcoming strategies that by now had become ingrained in his philosophy of doing business.

When Service Merchandise closed, he moved on to one of the popular mall-based retailers until it too fell out of popularity. That was 18 years ago, and a perfect time, it seemed, for Kendall to set out on his own.

Day’s Fine Jewelry stands today much as it did nearly two decades ago: cases filled with a range of pieces for virtually every need, every budget. There are rings for the most discerning buyer where price is a secondary consideration, or for the most budget conscious. Watches (their popularity is winding down, Kendall says, simply because so many rely on cell phones and other digital devices) discounted as much as 50 percent—even a rack of lovingly restored models for as little as $20.

Despite the store’s reputation and the flow of new and returning customers, Kendall says revenue has been down this year, and he’s hoping the holidays will bring a burst of renewed sales. His wife, recuperating from a fall that has put her into hobbling mode for the last few weeks, is expected to be on hand to help, and he might even recruit his dad to come in as he did several years ago if business gets to be brisk, as he hopes it will.

The signs of a good season seem to be within reach. Kendall buzzes a steady flow of customers through the door, each one looking for something different: a woman seeking Kendall’s advice on a birthday pendant for her mom; a man looking for diamond earrings for his wife; a couple interested in trading in a necklace, a family heirloom, now that the price of gold has pushed beyond the $1,350-per-ounce mark.

While he still values the precious metal, Kendall says the focus of many buyers these days has been on silver, so he stocks sterling pieces in much greater variety and abundance than ever before.

“Silver is being called the new gold,” he says, noting that its price has increased to over $24 an ounce from $3 an ounce just five years ago.

So while costs of the commodities he sells are in a continuous ebb and flow, business goes on as usual for Kendall. What hasn’t changed appears to be how he interacts with customers, new ones and old ones alike, and his confidence that his clientele appreciates the way he runs his business.

“It’s all built on treating everybody the best you can treat them.”

There’s no sign on the walls that pronounces that philosophy, but Kendall’s years of success seem to prove that no one leaves the store without knowing it.