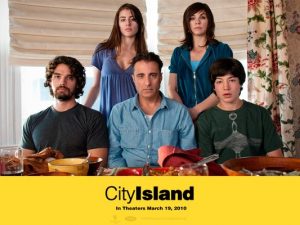 Andy Garcia has been around movies since the mid-‘80s, playing gangsters, cops and other steely tough guys. My wife has always had a strong aversion to his work, and while I liked some of his early roles, in The Untouchables, for instance, he’s never been a special favorite of mine, either.

There’s something generic and unexciting about the Mr. Cool persona Garcia offered in so many films. He’s like a bland knockoff of the Brando/Pacino/DeNiro school: the look, the voice, the manner are all there, but somehow the passion we get from these other actors seems either absent or forced from Garcia.

Garcia’s starring role in the comedy City Island, which he also co-produced, seems to have liberated the actor from his uncomfortably held pose, however, at least for one movie.

The ingenious premise of the film, which is well worth the drive from the Kyrene Corridor to Harkins Camelview in Scottsdale, allows him to play an ordinary guy, comically cowed, and to gently spoof the kind of ethnic-tough-guy stereotyping that allowed him an acting career to begin with, and which has largely defined the parameters of that career.

Written and directed by Raymond De Felitta (son of the late, interesting novelist and filmmaker Frank De Felitta), City Island is set in the fascinating Bronx beach neighborhood of the title.

Garcia plays Vince Rizzo, a prison guard (or, as he prefers, a Corrections Officer) whose one-night-a-week absence from his high-strung family, under pretext of a poker game, hides a dark and shameful secret: He longs to be an actor, and is sneaking off to a class.

His prickly, perplexed, percolatingly sexy wife Joyce (Julianna Margulies) is sure he’s having an affair.

He has a potentially scarier secret, too—a son from an ill-advised relationship before he was married. When the grown kid, Tony (Steven Strait), shows up as an inmate in Vince’s prison, he gets him sprung to his custody and brings him home, telling his family by way of explanation only that he knew the boy’s mother.

The other people in Vince’s life have secrets of their own, however.

His daughter Vivian (played by Garcia’s lovely real-life daughter Dominik Garcia-Lorido) pretends to be away at college, but she’s lost her scholarship, and is working as a stripper. His wiseguy teenage son Vince Jr. (the terrific Ezra Miller) is a budding fetishist.

Vince’s acting-class partner and career adviser (Emily Mortimer) has a mysterious side, and even his curmudgeonly acting teacher (a fine brief turn by Alan Arkin) is glimpsed in a moment of stinging vulnerability.

That’s the theme of City Island: That family life is almost inevitably conducted through a web of lies, poses and concealments. Played just a touch more heavily, and it easily could be an Arthur Miller tragedy, but De Felitta isn’t beating his breast over the Rizzo’s deceptions. He finds them a cause for relaxed, unhurried amusement. The best scenes in the film are the family-group sequences, in which sarcasm and squabbling keep bubbling up during the attempts at friendly conversation.

It’s a reflexive self-defense mechanism, and while the constant snapping has clearly taken a long-term toll on the Rizzos’ psyches, it’s also clear that they don’t really mean anything personal by it. The film could use more of these scenes.

You can feel the audience responding to the hum of the comedic ensemble work, and when the characters break into smaller groups some of the power is dispersed. But even if it’s not quite a knockout, City Island is an Andy Garcia movie that even my wife would like, I think.

Good luck talking her into going, though.