Camouflage-uniform tribute may net as much as $20,000 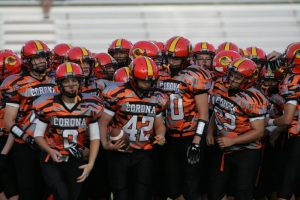 Corona del Sol’s football team raised almost $9,000, and possibly as much as $20,000, following the players’ camouflage-uniform tribute to those who lost their lives eight years ago on 9/11.

The idea to wear the jerseys and auction them off after the Aztecs’ Sept. 11 game against Desert Ridge High School was the brainchild of three-year varsity quarterback Chase Cartwright.

“Once I saw, when the football schedule came out last spring, that we would play a home game on Sept. 11, I had been thinking about a way to remember those who lost their lives eight years ago,” said Cartwright.

“I brought up the possibility to Jim Bell, Corona’s activities director, in the weight room one day of having camouflage jerseys and selling them after the game.”

Once Cartwright’s idea was approved by the district, and the Wounded Warrior Project, a non-profit organization that supports families of soldiers who have been injured or killed in battle, had been selected to receive the proceeds, everything fell into place, according to Cartwright.

Corona teacher and head track coach Tim Kelly took on the responsibility of putting everything together. The Aztec Touchdown Booster Club helped raise donations from local businesses and individuals to purchase items to be auctioned.

“Among the many others who contributed were CdS alum Sean Benson, from Benson Systems, and several other CdS parents and local businessmen, including Dr. Matt Seidel from Orthopedic Surgical Oncology of Arizona and John Bebbling from TDC Interiors.”

In addition to the commemorative items sold at the game, school clubs sold ribbons, pompom and other spirit items to benefit the project.

Altogether, they wanted to put together more than $20,000 for the national Wounded Warriors fund that provides insurance and scholarships for family members who have lost loved ones in the military and need financial assistance.

“We raised $9,000 alone from the jerseys and pants we wore during the game that were auctioned off,” said Cartwright.

“We expect to have a total of at least $20,000 raised for this worthy cause after we add up all the other items sold that night.”

Corona lost its game against Desert Ridge 23-14 but the players knew that the cause they played for that night was much greater than any game on any night, Cartwright said.

“Win or lose, we held our heads high because we knew we were playing for a great cause and that thousands of people were watching over us that night,” he said.”

Charges filed against ex-corrections director who shot self, aimed gun at police in standoff