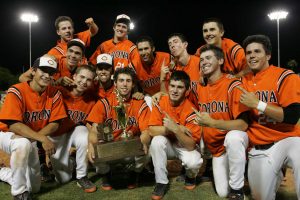 Corona del Sol’s baseball team stuck to the game plan outlined by coach Dave Webb and won the 5AI state championship May 16, turning a tight game into a 10-run rule blowout by the sixth inning. It was Corona’s second state championship and the first time the team had made it to the finals since 1993, when that year’s team 1993 team won the championship.

Many of the Aztec players had been preparing for this moment since they were freshmen, and coach Webb took over the program, four years ago. Webb worked on the players’ mental attitude and got them believing. By the time they reached 5A-I finals, the Aztecs believed that if they followed coach Webb’s strategy to be patient, keep the ball on the ground and use their speed, they would ultimately win the championship.

“Our attitude was to win,” said center fielder Ryan Moore. “No looking back, we were confident heading into the finals against Hamilton.”

Nothing could have prepared the No. 5-seeded Aztecs, though, for what happened in the bottom of the fifth and sixth innings, when a close 2-1 game turned into a 11-1 win over defending 5AI state champion Hamilton.

All the players in Corona’s batting order proved throughout the season they can make it happen, but the Aztecs started the first inning on defense when Hamilton’s batters went three up, three out. Aztec pitcher Tyler Giannonatti struck out two, and Corona’s infield put the third batter out at first.

The Aztecs had one hit in the first inning when second baseman Mike Felton whacked a good one for a double but was left on base when Hamilton caught a fly ball for Corona’s third out.

Hamilton was one, two, three up and out in the second inning when Felton made a terrific throw to put the runner out at second. Left fielder JT Armstrong caught a fly ball for the second out, and Giannonatti forced another strike out for the third.

Corona was able to get a single by designated hitter Evan Ritchey but left him aboard first base with a pop-up for a third out to end the second inning.

The Huskies threatened to score in the third inning with a man on third base but had to leave him there after Giannonatti had his third strikeout of the night and the defense got their third Hamilton out at first.

Corona scored two runs in the third inning after settling down and being more patient waiting for a good pitch. Catcher Andy Nist started it off with a single. Billy Upham came in as a courtesy runner for Nist. Ryan Moore sent Upham to second when he got his 53rd hit of the season with a single.

Shortstop Kirby Pellant hit his second pitch shallow left to load the bases. Felton then hit a long ball to bring Upham across to score the Aztecs first run. Giannonatti was up to bat when Hamilton pitcher Zack Johnson caught Felton trying to steal second base. Hamilton was so engrossed in running down Felton between first and second base they forgot about Corona runner Moore, who ran in from third for the Aztecs’ second run in the third inning.

Giannonatti hit a fast ball to put him on first. Marshal Gottlieb came in as a courtesy runner for Giannonatti.

Trever Allen was up next, and showed the Huskies a nice piece of hitting with a single that advanced Gottlieb to second. The Aztecs left two men on base with a third out to end the third inning.

The Huskies’ first batter got a base hit in the fourth inning. Their second batter struck out. Nist saw the batter trying to steal second base and threw to Felton, who stretched out to his right to catch the ball and then leaned backward to his left to tag the runner out at second. Felton caught a line drive to produce Hamilton’s third out of the inning.

At the top of the fifth, Hamilton trailed 2-0 but was able to score one run in the fifth inning when the first batter hit a single, stole second base and ran in to score off a pop-up fly to left field, making the score 2-1.

The Aztecs had two outs in the bottom of the fifth inning when Felton was walked after being hit by a pitch. Giannonatti hit a great ground ball out between second and third base in left field, advancing Felton to third. Gottlieb once again came in to run for Giannonatti.

Husky pitcher Johnson appeared rattled after hitting Felton with a pitch and threw the ball to first several times trying to put Felton out while he was pitching to Giannonatti. Johnson then hit Allen, the fifth batter he had faced in the fifth inning, with a pitch, loading the bases. Johnson appeared to be further rattled because Allen may have been able to move to avoid being hit.

With two outs in the fifth inning, Hamilton’s game plan started to unravel. It was to get worse. Gregory Ryan had the play of the game when he ripped one over head of the Huskies third baseman for a double and three RBI’s.

“The turning point in the finals for me was when Gregory Ryan hit a double with the based loaded and all three scored on his double,” said Moore.

With the Aztecs ahead 5-1, Corona’s seventh batter in the fifth inning, Ritchey, popped one deep into left center field. Hamilton’s shortstop back-peddled while center field was running up. The short stop caught the ball but dropped it. Ryan was able to run in for a 6-1 score. Hamilton was able to end the fifth inning striking out the eighth Corona batter the Huskies faced after getting the first two out.

Things did not get better in the sixth for the Huskies. Their first batter popped one up for an easy out. The next batter was Hamilton’s lead off batter who hit a ball hard towards the back fence.

Center fielder Moore read the ball and took off without any hesitation on a dead run. He demonstrated coach Webb’s plan by showing Hamilton his speed, running down the ball and catching it just as he hit the fence. Although knocked down by the fence, he held onto the ball for the second out.

Giannonatti ended the top of the sixth inning with a big strikeout. Corona was up already amassing ten hits so far in five innings.

Nist once again lead off batting in the bottom of the sixth. He hit a high bouncer over Hamilton’s third baseman for a single. Upham came in as a courtesy runner.

Corona’s third batter in the sixth inning, Pellant hit a triple up and away pitch into the gap between left and center field. Upham was waved into home plate by the base coach. The Huskies had a chance to get their second out but the catcher dropped the ball when Upham slid into home allowing Corona to score another run to go up 7-1.

Hamilton changed pitchers when Felton came up to bat and he was intentionally walked so Corona had runners on the corners—first and third when Giannonatti came up to the plate. Giannonatti hit the second pitch to center advancing Felton to second and bringing in Gottlieb to run for him.

The Aztecs kept on the pressure when Allen hit his third pitch to the far left allowing Felton to score making it 8-1. With the bases loaded, Ritchey hit a pop-up fly out but Gottlieb was able to score Corona’s tenth point crossing home plate from third base.

Leading 10-1 with one out Erik Wanta hit the second pitch hard to Hamilton’s second baseman who could not handle the ball allowing Wanta to get on first base and advancing the other runners.

With the bases loaded and two outs, Nist hit a high ball that allowed the Aztecs to score their 11th run of the game and win because of the ten-run rule in high school baseball.

The Aztecs had so many weapons to hurt Hamilton. Giannonatti pitched 67 balls using a combination of fast balls and changing speeds to keep the Huskies off balance. All of Corona’s batters hit with confidence and were patient waiting for pitches. The Aztecs also had good chemistry, some of them having played together for years. It reminded one Corona alumni of the 1993 team that won Corona’s first baseball championship.

“Assistant Coach George Sanchez told me all year what a close-knit group they were,” said Tim Vasquez. “It reminded me a lot of our team in 1993. We were all best friends then and still are the best of friends today.  That camaraderie makes a difference in the big games.”

Vasquez has remained in town as proprietor of the popular Someburros Mexican food franchise, and continues to be one of the Aztecs’ most ardent supporters.

It was the Aztecs’ first appearance in the finals in 16 years, something the team had been working toward for over three years and it was a great finish for the seniors on the team—Pellant, Armstrong, Upham, Tanner Tripp, Kevin Collinge, Felton, Chris Lopez, Gottlieb, Brock Abbadini, Wanta, Ben Deem, Bryan Kent, Moore, Giannonatti and Ritchey.

“There was no better feeling when we won the championship trophy,” said Moore. “We have been working hard toward this since our sophomore year, and ending it like this made it all worth while.”

“I was so proud of this team and so proud to be an Aztec,” said Vasquez. “It was great to see it happen for such a good group of guys. They worked hard for it, and they deserved it.”