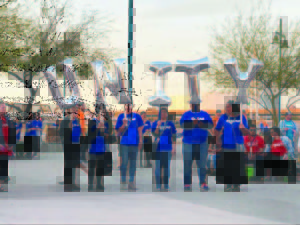 Looking toward the sun setting over Tempe Town Lake, surrounded by swaths of people from seven valley cities wearing different colored shirts to represent their homes, Nwoha was moved.

The magnitude of a lively event with such an earnest purpose was not lost on her.

The Regional Unity Walk brings together people from across Arizona to promote understanding in the face of the differences that inherently exist between different communities. Today, it is organized by the governments of the seven cities involved, but began more quietly in 1998, when the people of Tempe started walking for unity.

“The walk shows that we can come together for a common purpose,” Nwoha, a 46-year-old Scottsdale resident, said. “Though we don’t think alike, we don’t look alike, we may not marry the same types of people, it’s important to come together.”

Nwoha moved from Cincinnati in early 2017, and Saturday’s walk was her first. She was inspired by the potential of a community that can bring people together from across such a large city for a common purpose.

“The best thing about [the walk] is it gives a venue for people to come together,” said Carl Hermanns, a member of the Tempe Human Relations Commission and an organizer for the event. “It is a symbol for other people to see. A statement of unity and what we believe as a community.”

Hermanns’ commission works as a liaison between the community and the local government to find solutions for violations of human rights in Tempe. The commission was responsible for the ‘Tempe Welcomes All’ initiative that in 2017 culminated with the posting of signs throughout the city and its government buildings that carry the slogan. The signs greeted walkers as they entered the city.

On the 20th anniversary of the Unity Walk, Tempe Beach Park was filled with families from each of the different cities, distinguished by their shirt color but together for the night to dance, eat and come together to celebrate their unique perspectives. The notes of a five-piece band filled the air until the walk began.

Tempe Mayor Mark Mitchell, who has been involved with the walk since its inception early in his career as member of the City Council, spoke to begin the walk.

“Our region has been ahead of the curve when it comes to working together to be inclusive and understanding one another in all aspects of life,” he said.

He was followed by city councilmembers from around the valley, who took turns at the podium to express what diversity means to their city and the larger Phoenix community.
Chandler Councilman Kevin Hartke, who is also a Chandler mayoral candidate this year, called Chandler the most diverse city of those represented at the event. He said striving for
diversity means “standing for people’s basic rights and for people’s pursuit of happiness and prosperity.”

“The more diverse we are, the more viewpoints and expertise we bring to our community,” Hartke said.