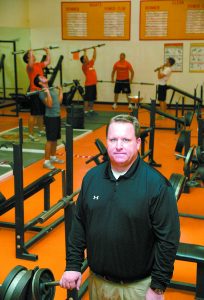 Tim Kelly has big plans for the track program at Corona del Sol High School. Kelly, the Aztecs’ new head track coach, is focusing on a program that teaches, develops and achieves commitment, character and a championship mentality among his young student athletes.
With more than 15 years’ experience helping young people strive to be their best, Kelly says his goal is to develop a culture of hard work, accountability and work ethic that will lead to responsible student athletes with winning attitudes.

A 1987 CdS graduate, Kelly started coaching football, wrestling and track at Corona while working on his teaching certification after graduating from Arizona State University with a BA in history. He was also a long-term substitute teacher and security guard at CdS.

He started teaching full-time at Corona in 1997 and continued his education by earning a master’s degree in education from ASU.

Kelly is replacing Dave Vibber, who has been coaching three sports at Corona for over 28 years.

“Coach Vibber has given over 28 years of coaching to Corona,” said Kelly. “We are indebted to his many years of service at Corona and for the thousands of kids whose lives he has impacted coaching football, wrestling and track.”

Kelly has hired or retained seven coaches to assist him in the track program.

“We have hired a lot of highly qualified coaches to assist us in our track program,” said Kelly. “Several of our coaches are very highly respected statewide.”

One assistant coach is Pete Pond who has over 20 years of coaching experience and is in knowledgeable in every track event. He has coached several state champions according to Kelly.

Another is hurdle coach Anne Benson who is returning to coach at Corona. During the three earlier years she coached at CdS, she had several state placers.

Long time boys cross country coach Pat Smith will be in charge of the distance program. Smith has coached at Corona for over 14 years and has numerous state placers according to Kelly.

“Cynthia is very high respected in the track community,” said Kelly. “She has built a great and successful program at Aprende and comes over from Dobson where she had a lot of successful state placers in the sprinting category.”

Corona alumni Jon Whaley is staying on as the pole vault coach. Whaley was a state placer in the pole vault for CdS and also vaulted at Arizona State University and Northern Arizona University before returning to coach at Corona.

“Jon has been coaching the pole vaulting program at Corona for four year,” said Kelly. “He has done a terrific job in rebuilding our pole vaulting tradition.”

“Coach Venturo has had eight state placers and a state runner-up in the shot put during his tenure as shot put coach,” said Kelly. “Last year he had two sophomores and a junior place in the Central region and move on to the state meet.”

, who has coached both boys and girls basketball at Corona, will continue coaching track under Kelly this season.

“Darren is excellent working with students and getting the most out of the athletes he coaches,” said Kelly. “He always puts kids first and does what is best for the kids.”

Kelly is not just concerned with developing students into competent track athletes. His goal is to leave a lasting impression on young students that will carry them into adulthood. He plans on providing student athletes with an opportunity to experience being successful in some endeavor during their formative years by participating in his track program. His aim is for all track athletes to come out of his program having learned how to be competitive, successful and responsible as students, athletes and citizens. He wants to help students develop a responsible winning attitude and develop a desire to keep growing and learning throughout their lives.

Corona track starts Feb. 9 after two weeks of pre-season camp where 100 kids learned about and participated in different track events after school five days a week.

“The number of kids who came out to the pre-season camp was encouraging,” said Kelly. “We had kids come to attend camp this year who had taken last year off.

“The pre-season camp gave the kids a variety of different events to participate in and they all worked really hard. The camp also gave us an opportunity to teach everyone multiple events in track.”

Kelly wanted to expose Corona athletes to the different track events because he wants to build a team attitude and unity for the track team.

“We will be asking kids to help the team in any way they can and this pre-season camp was a great opportunity for them to see where else in track they can help the team,” said Kelly.

Kelly and the other coaches are on a quest to assemble a Corona track team that can not only contend in the region but in the state in track events.

“We have gone on an extensive recruiting plan on Corona’s campus this year,” said Kelly. “Together we sought out and identified athletes who had participated in track or other sports in the past and have contacted them about coming out for track this season.”

This extra effort appears to have been successful because Kelly is expecting a team of more than 200 track athletes based on the number at the pre-season camp and the ones still competing in winter sports that he expects to come out.