When the members of The Academy Drum and Bugle Corps rolled out of Tempe for their very first competitive tour last summer, they had no idea how they’d fare against their more experienced and established competition. 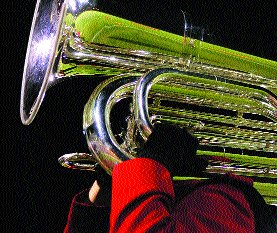 Little did they know that one year later, in July 2005, they’d finish their second undefeated season.

In an activity often decided by mere fractions of points, The Academy frequently won its division by upwards of 10 points during its first two seasons.

“We knew that we had a strong program going into (the first competition) because we took three years to build the corps before we actually went out and competed for the first time,” said Mark Richardson, director of The Academy.

“Normally a group will just go right out of the chute and try to compete not having everything figured out or put together, so we kind of took our time to make sure that it happened right.”

Whether it was the careful and reserved preparation or simply superb instruction from the staff, The Academy’s strategy for success has not yet let it down. Despite the fact that the corps has yet to be beaten in competition, the members remain humble about their success.

“Not so much beating them, but comparing to them.”

A drum and bugle corps is a lot like a high school marching band. While many differences exist, the fundamental idea remains consistent: a group of young people, age 21 or younger, play music while executing complex drill moves on a football field.

Drum corps, however, have a limited instrumentation and are often made up of students from all over a state or even from outside states’ borders. They travel throughout the country all summer, competing for audiences nationwide in preparation for the World Championships in August. They sleep on buses or gym floors and shower in locker rooms, practicing on high school football fields.

“It’s different. Definitely different,” Orrantia said. “It actually wasn’t that bad. The only bad part was trying to sleep on the bus during 14-hour bus rides.”

He said there were times when the corps would ride on a bus all night, then arrive at a practice site where it would practice all day in preparation for an evening performance before hopping right back on the bus.

The Academy, as part of its slow growth strategy to ensure long-term financial solvency, has yet to compete in finals, choosing instead over its first two years to end its season in July. This year, the tour took the corps all across the west, including several stops in California, Arizona, New Mexico and Colorado. The World Championships are clearly in the plans for the future, however.

But the added expense of traveling through July and into August next year for finals in Madison, Wis., will total anywhere from $100,000 to $140,000. It will be a difficult push requiring extensive community assistance, but Richardson is confident it’s possible.

“What we don’t want to do is charge the kids more. They already pay $1,700 for the experience, and that is on the high end for the drum corps community,” he said.

“So we want to make sure and not put that burden on the kids and do the job of fundraising ourselves; have the community give us the support so that the kids can participate without having to pay for it out of their own pockets.”

Even with the truncated season this year and last, the time commitment is immense. From January until the end of school in May, the corps members had rehearsals once a week, in addition to a weekend-long camp each month where they rehearsed heavily over a Friday-to-Sunday period. As soon as school let out, daily rehearsals began, lasting 12 to 13 hours in the sizzling summer sun.

“It wasn’t that bad,” Richardson said in reference to the heat. “We try to come up with a schedule that doesn’t involve the most activity in the hottest part of the day. But it really only reached 100-degree days by the time we were ready to hop on tour.”

The Academy Drum and Bugle Corps is only a small piece of a larger organization: the Arizona Academy of the Performing Arts, which was established in the Kyrene Corridor several years ago to provide for the “expansion and enhancement of music education and performance opportunities for young people across Arizona,” according to its website, www.arizonaacademy.org. It provides other involvement opportunities for Arizona’s musicians of all ages, including both young children and adults.

Richardson, the Executive Director of the AAPA as well as the Band Director at Corona del Sol High School, said he founded the AAPA with the intention of giving Arizona’s youth the opportunity to more easily participate in drum corps.

“It was an outlet for the organization to start the drum corps for Arizona and give that opportunity to Arizona kids so that they didn’t have to travel thousands of miles to participate in the activity,” he said. “But we wanted to go beyond just the drum corps. We wanted to make the organization stronger by bringing more programs to the table so that each one of the programs feeds off of each other in a synergistic sort of way.”

Running the AAPA on top of the Corona band is a big job for Richardson. But he says he is reminded why he does it at the end of every show; shows that, so far, have led The Academy to first place victories every time.

“It comes down to everything that happened in the last days of this year, where it kind of all comes together for the students and everybody realizes what it’s all about—that it’s not just a competition thing but it’s about teamwork and making something magnificent happen between 120 or 130 people,” he said. “What it feels like to be in performance and knowing that you’ve spent countless hours trying to perfect what you’re doing, and everyone’s achieving the same goal.”

Jonathan Cooper is a freshman majoring in journalism at ASU. He graduated from Corona del Sol H.S. in 2005.