Although some may disagree, I’m not a back-seat driver. At least, I wasn’t until last week when I found myself in said seat, rolling north on Rural Road. With nobody in the front seat of the car.

It was as if Casper the Friendly Ghost was signaling, accelerating, braking and turning the wheel.

The back(seat) story: Waymo, the Silicon Valley, Calif.-based, autonomous-driving-technology company, whose white vehicles with peculiar rooftop protuberances often spin through your neighborhood, invited Wrangler News to hitch a ride with Waymo One. There’s only one region in the world where this fully autonomous (no driver) ride-hailing service is available, and that’s a 50-mile radius in the East Valley, including Tempe and Chandler. 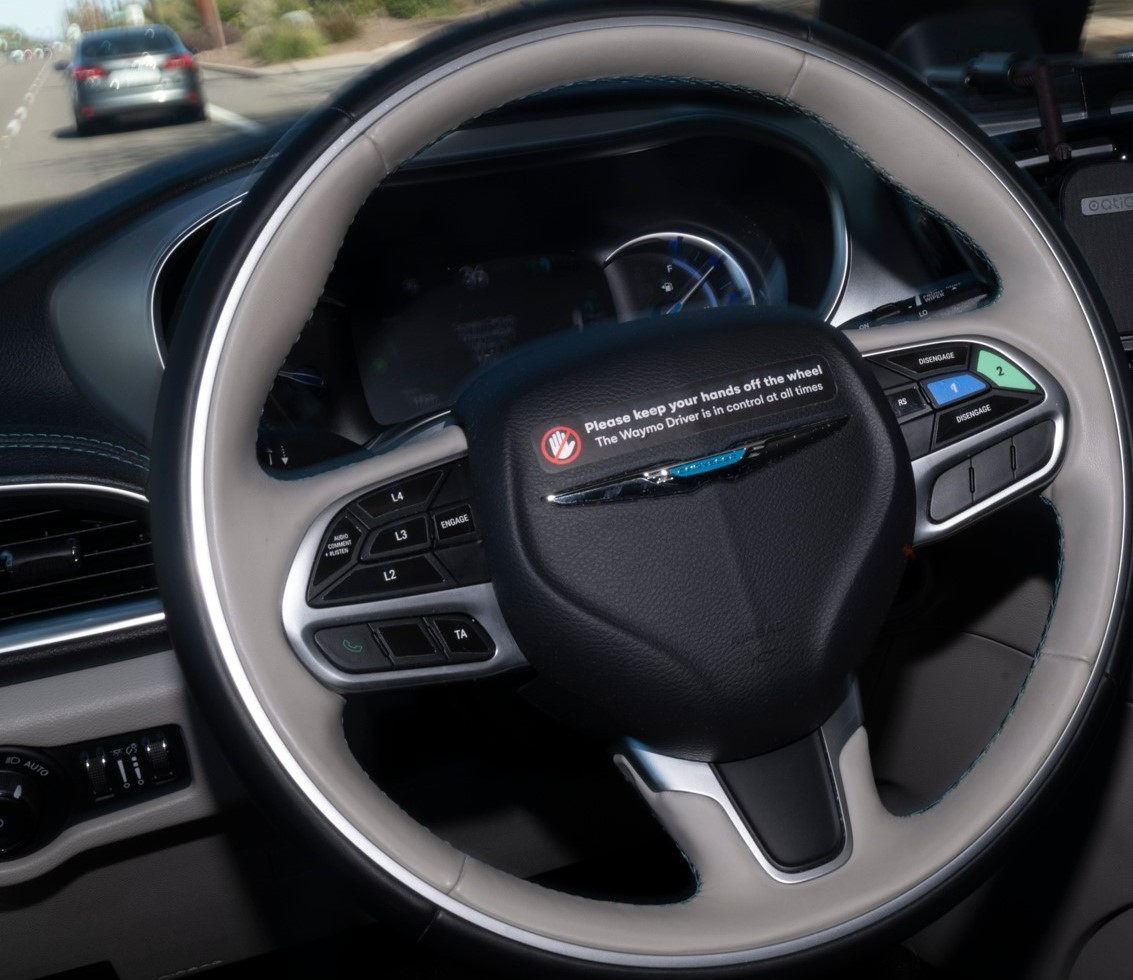 So, of course, we said yes. I used the Waymo One app to input our pickup location and destination, got a fare estimate and hailed a vehicle to my south Tempe neighborhood. Seven minutes later, Wrangler photographer Pablo Robles and I climbed into the second-row seats of a Chrysler minivan, clicked on our seat belts and off we went.

The service has been open to the public since October 2020. Its map is a long, imperfect rectangle bounded generally on the west by either Kyrene or Rural roads or College Avenue; on the north a few blocks north of McClintock High; on the east a few blocks west of Arizona Avenue; and on the south by Loops 202 or 101, and Ocotillo.

Tempe mom Sophia Lovasz is way ahead of us. She has taken an estimated 60 rides on Waymo since 2018 when the company first sought people with diverse backgrounds and transportation needs to ride and give feedback about its self-driving cars.

She and her husband, Attila, took their first ride on a date night to a sushi place, immediately noticing a big plus: no designated driver needed. On that ride, another person was in the driver seat, and Lovasz initially couldn’t accept that the person wasn’t driving.

“I sat diagonal to him and looked for evidence that he was driving,” she said, “but his feet weren’t pressing any pedals. I started to see that the car actually was driving itself.”

Lovasz’s rides haven’t always been perfect. A bird once flew in front of the car, causing it to behave “weirdly,” she said. Another time, the car stopped in the middle of a busy intersection and the driver had to take over.

But her experiences mostly have been prompt, comfortable, safe and smooth, and she appreciates — as Waymo states on its website — that it “never gets drunk, tired or distracted.” And compared to other ride-hailing services with human drivers, she’s felt safe from COVID-19. Masks are required if a Waymo “autonomous specialist” is present up front, and some cars even supply face coverings.

Lovasz took her first fully autonomous ride last April, then began chronicling those experiences on TikTok. She rides often to her job as manager of Arizona State University’s Sun Devil Marketplace, disembarking at an ice-cream parlor off campus, to Costco where shoppers have reacted to Waymo’s empty front seat with “shock and awe,” and to Chandler Fashion Center.

After a brief stop at Chandler Regional Hospital (I was fine, it was my error on the app), where our car impressively detected pedestrians approaching a crosswalk and stopped early for them, Pablo and I rode to the Chandler mall. 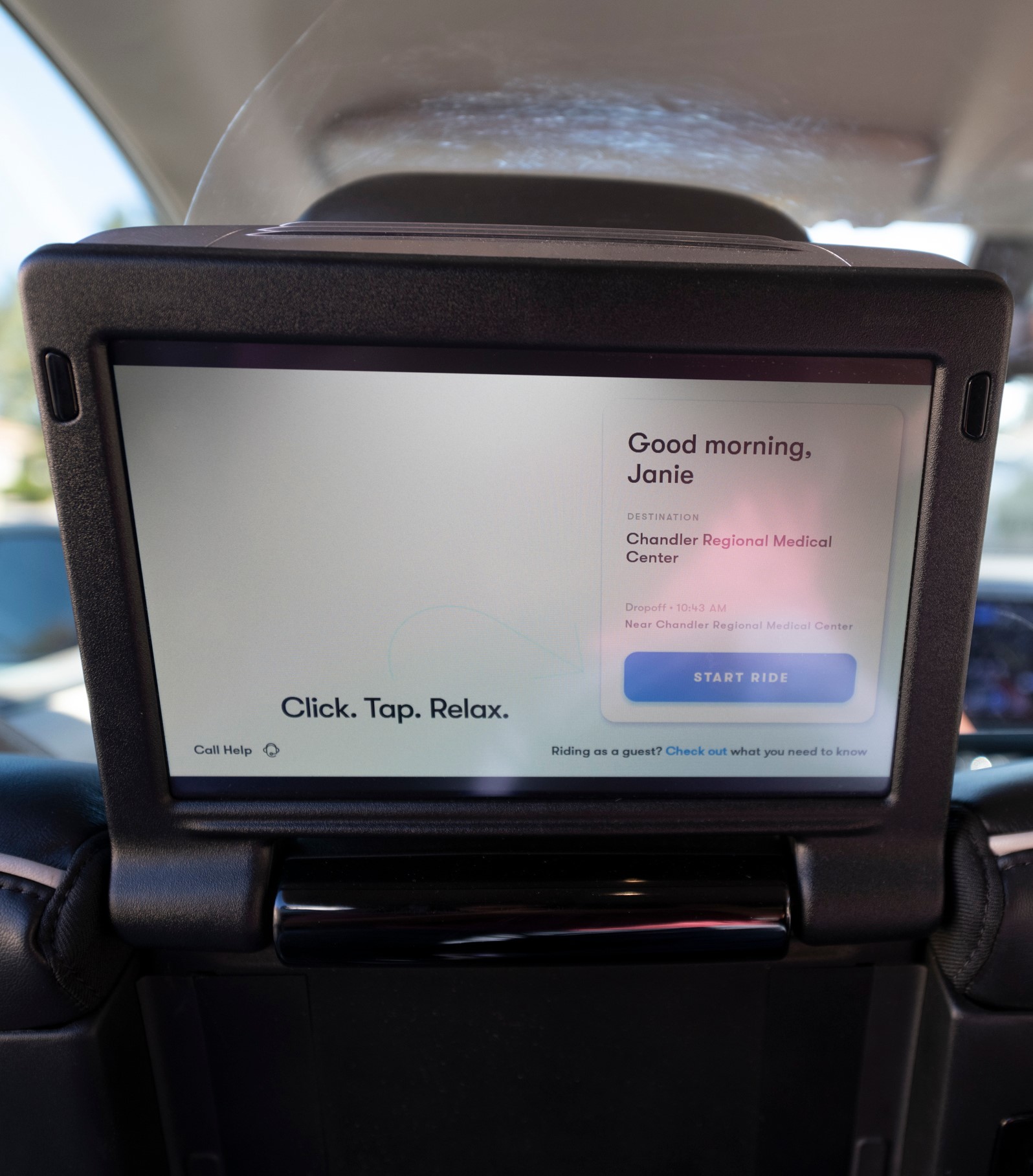 As with taxis, a plastic divider prevented us from trying to reach into the front. Unlike a cab, there were wipes and hand sanitizer, a car seat in the third row and air-temperature controls.

I watched our route on screens on the back of the front-seat headrests and offered specific feedback on our ride, choosing faces — happy, neutral, nervous or surprised.

Our car accelerated quickly to reach the speed limit on any given street, but never surpassed it. Although braking, such as when a pedestrian was sensed on a sidewalk, or steering, such as around a large truck, could be abrupt, we felt in good hands, albeit invisible ones, the whole time.

But on the way to the mall, we noticed a peculiarity that some riders would not appreciate: Our car went out of its way to avoid making left turns onto busy streets without traffic signals. Instead, it took us through residential areas (one with speed bumps!) to either

reach a stop light or make a safer right turn.

That resulted in a 13-minute ride from the hospital to the mall, where we were dropped across a large parking lot next to a sandwich shop. Waymo seeks the safest, not necessarily the closest, spot to deliver its riders.

Since beginning its technology development in 2009, Waymo vehicles have recorded more than 20 million autonomous driving miles on public roads, and more than 20 billion miles in simulation. The technology has been tested in 10 states, plus the District of Columbia, and in more than 25 U.S. cities. Vehicles have been heat-tested in Death Valley and Las Vegas, and driven in freezing Michigan and Lake Tahoe.

Last March, Trent Victor, Waymo’s director of safety research, reported the findings of its study on how autonomous technology performs in real-world, fatal crashes by human drivers. How might Waymo’s system perform in actual fatal-crash scenarios?

The report cited a World Health Organization statistic that more than 1.3 million people die on the world’s roads each year. It’s the scary equivalent of a full passenger plane crashing every hour, or one death every 30 seconds, Waymo reported. Further, the National Highway Transportation Safety Administration estimates that 94 percent of all fatal crashes result from human error.

Pedestrian deaths are especially a problem in Maricopa County, which ranks second on the NHTSA’s list of counties with the highest pedestrian traffic fatalities, according to a 2019 study. With 160 in 2018, Maricopa County was second only to Los Angeles County (225).

In Waymo’s research, data on every fatal crash in Chandler from 2008 to 2017 was collected and analyzed, excluding those not matching situations a Waymo vehicle would face. Those outside its operating area, for example Interstate 10, weren’t included.

The remaining germane accidents were reconstructed, and 72 simulations were created. Those simulations found that Waymo’s technology avoided or mitigated all of the crashes, except those in which its vehicle was struck from behind.

The point isn’t lost on Lovasz.

“Some people think I’m crazy — ‘Why would you bring your kids on that?’ — but people should want the roads to be safer,” she said. “The cars are clean and comfortable, and the driving is consistent.”

From Chandler Fashion Center, I ordered our next Waymo vehicle to take us home, arriving 12 minutes later.

I wanted to experience riding alone, so I summoned a third car which took 13 minutes to arrive, the longest time of the morning.

I realized two things on the way to my destination, Tempe Public Library. Waymo is far more courteous than many human drivers —it stopped well in front of a crosswalk when the traffic signal at Rural and Guadalupe roads turned red.

However, Waymo may not be for the impatient, or those in a hurry or for whom the only route between Point A to Point B is a straight line. As we approached the library, my car stayed in the right lane, prompting the backseat driver in me to point and shout, “Get in the left lane! Left! Turn left!”

Instead, it calmly passed Southern Avenue, turned right on Campus Drive, left on Jentilly Lane, left on Alameda Drive and finally found a light at Rural from which it could turn left. After a 3-minute stop at the library, we returned to my home. Had I wanted to run a book into the library, I could have used a multi-stop feature on the Waymo app to keep my car there — a great convenience.

Total fare for three rides in safe, clean, comfortable vehicles: $46.11. No aggression. No germs. Oh, and no tipping.