Teacher says Corona student Santas, spreading joy outside their comfort zone just to make a kid happy, ‘is a better lesson than I could ever teach’

Serves 185 disadvantaged children whose week — whose December, perhaps whose 2021 — have just been made.

“Screaming and glee,” said Sean Hannafin, principal at David Crockett Elementary in Phoenix, describing the scene at his school Dec. 10 when the Corona del Sol High Student Council and Honor Society visited for a day.

“If you can imagine Santa’s workshop, it’s that kind of feeling.”

Corona for years has had a Holiday Buddies program with Crockett, an inner-city Phoenix school attended primarily by homeless and refugee children, 100 percent of whom qualify for the federal government’s free and reduced-price meals. In past years, Student Council has organized drives to collect enough toys for Crockett’s second-graders. Other area high schools also participate so that every child in K-3 has at least one gift to open.

“They asked if we could collect toys for second- and third-graders, twice our normal load, so that’s what we did,” Forbes said.

The students bussed over to Crockett with 185 wrapped gifts — from art sets, books and Hot Wheels to Legos, Slime and Uno cards. They helped the children open, learn about and play with their gifts, make crafts, decorate cookies, enjoy pizza and chase around the playground. 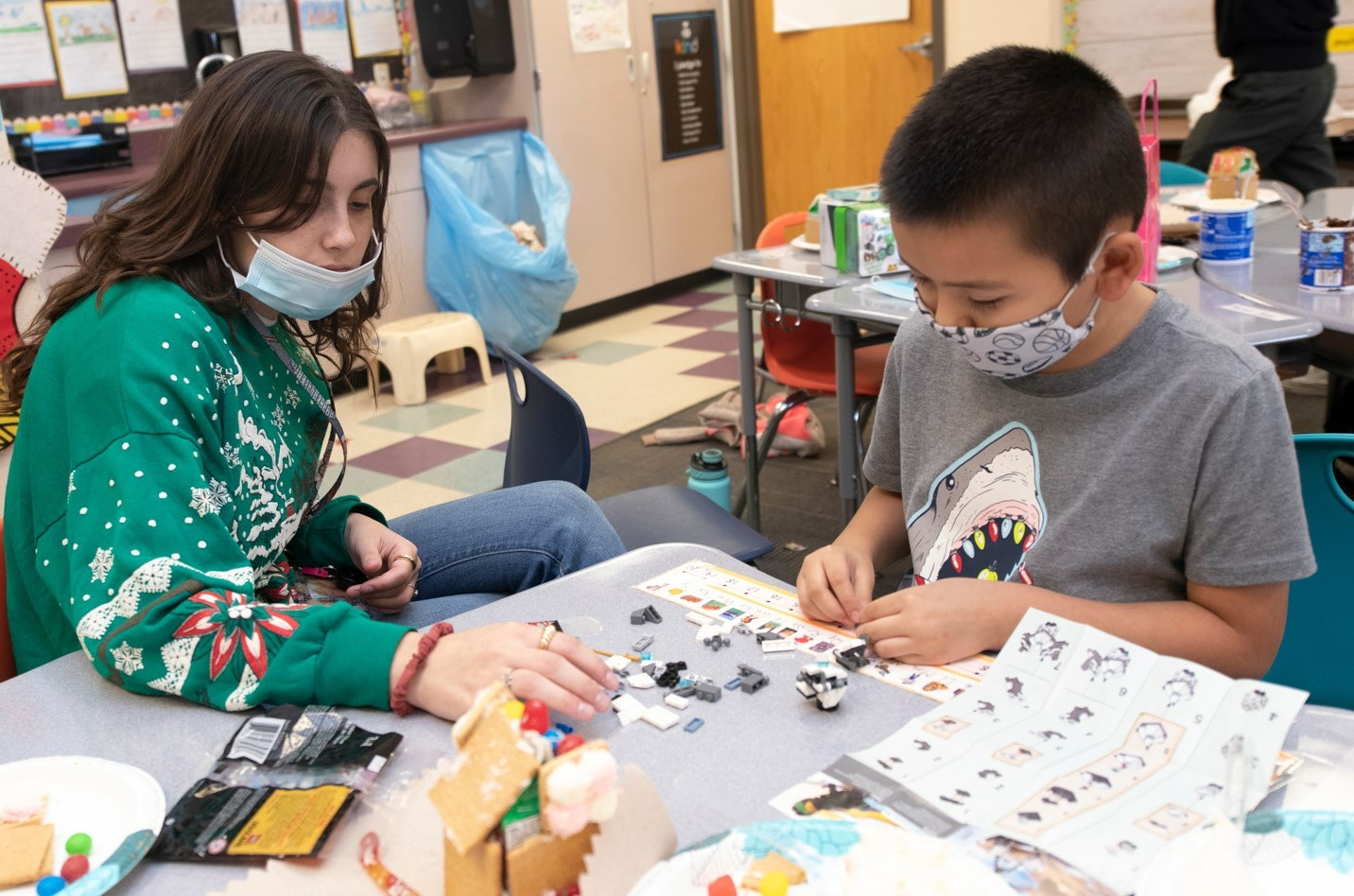 “Kids who come from a not-so-great part of town got an older brother or sister and had a day they could boss them around,” Forbes said. “The look on their faces is fantastic.”

It works both ways.

Hannafin agreed, saying, “For older students, this flattens out the world a bit for them. They see things on TV and on the Internet, and it’s all so accessible. Coming in behind our gates, and seeing that you can make an impact, is a big gift.”

Corona del Sol senior-class president Ashlinn Aguayo, 17, has done Holiday Buddies three times. As a freshman, she learned that many of Crockett kids wouldn’t otherwise receive many, if any, gifts, much less “have a grand Christmas” as most Corona del Sol students do.

“It’s a mindset change, seeing how blessed I am,” Aguayo said. “That special joy in giving a child a gift and getting to spend all day with her. It was very humbling.”

She became more involved as a sophomore, helping to plan and promote the event. Aguayo considers it Student Council’s finest hour — better than homecoming, prom and the Thanksgiving canned-food drive.

“This event is bigger than us, because we are able to spread joy into these young children who face so many hardships,” she said.

Aguayo spent the day with her second-grade buddies, Aaliyah and Naima, bringing dolls and hair bows, Poppet toys and Play-Doh.

“They were so happy with the presents, their faces lit up and they gave me hugs,” Aguayo said. “They said they had ‘waited their whole life for a baby doll like this.’”

When it was time to leave, everyone was sad.

“They both said they wished I could stay forever and that this was the best day ever of school,” she said.

“A lot of them are seniors, many are pit bulls or mixes, many have been in the shelters for a long time, and they are deteriorating in their kennels,” Bart said. “These gifts are for the long-timers that no one wants.”

Bart enlisted the help of National Honor Society students to create 150 tags with photos of the most at-risk dogs and place them on a tree in the school’s front office. The tags had QR codes linking to an Amazon wish list, and the collected gifts were delivered to Four Paws and Friends. 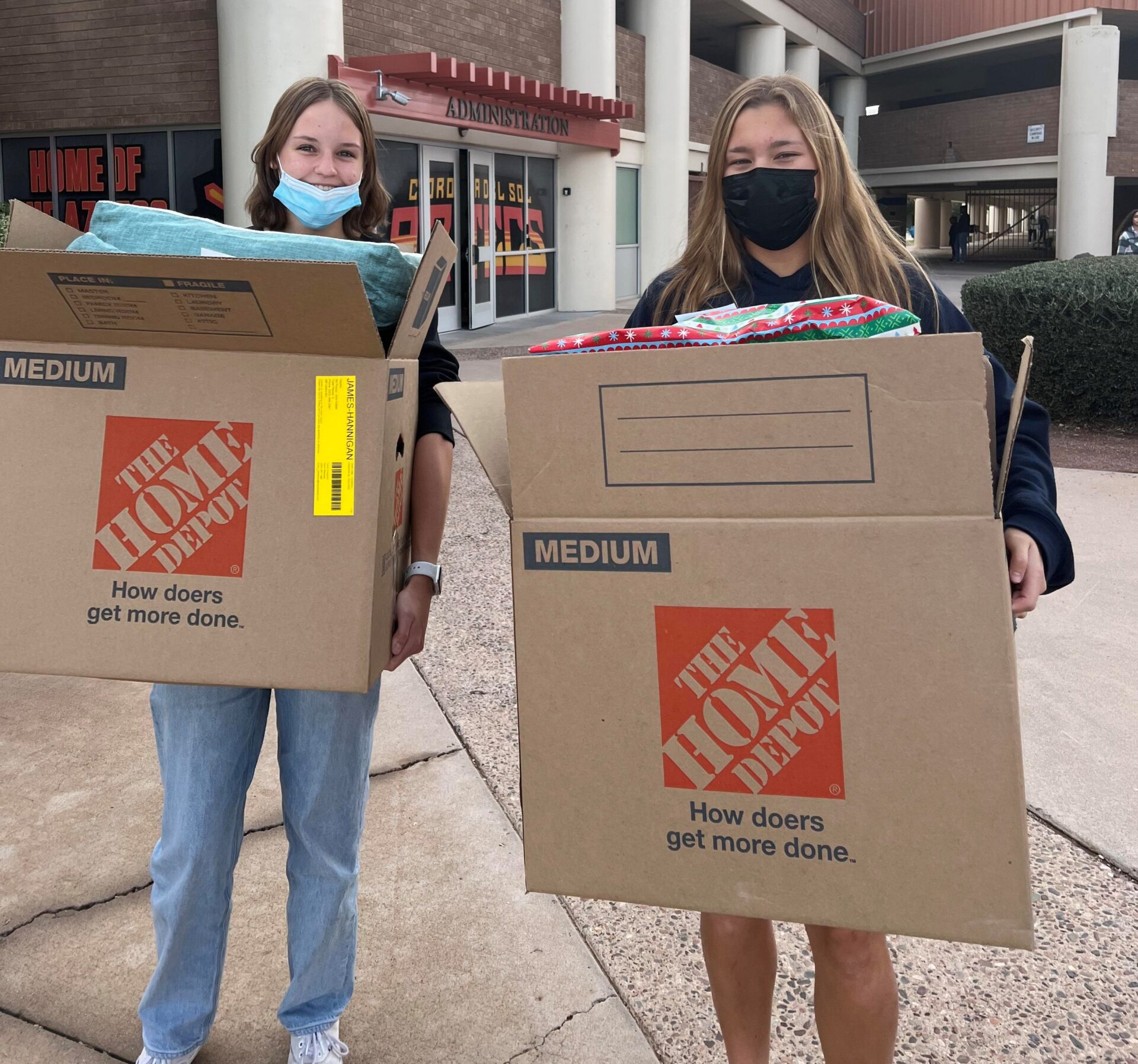 “Being involved in something like this helps children develop empathy and compassion,” Bart said. “Kids today are absolutely more empathetic and tolerant, much less judgmental and more compassionate to others. You just need to educate them and introduce them to things they haven’t seen before.”

Animal lover Paige Davies-Boerner, a Corona del Sol sophomore, jumped to be involved in Bart’s drive. As part of the school’s [cdstv] video magazine, she create a video for the school’s morning broadcast and purchased items for a dog.

“It’s a real bummer that there’s an e-list where selected animals have to be put down,” Davies-Boerner said. “Instead, we should assess the situation and understand the cause of overpopulation so we can problem solve.”

According to Pew Research Center, members of Gen Z — those born between 1997 and 2012 — are sometimes referred to as the “loneliest generation.” These so-called digital natives, especially those spending endless hours online, often suffer isolation and depression.

But being involved in a good cause, cultivating relationships with others outside your day-to-day circles, and thinking about someone else, can help.

“In a society where we tend to focus on ourselves, giving time to someone else really changes your perspective, and allows you to focus on ideals like love and joy, rather than on what you can gain socially or materialistically,” Aguayo said.

On that recent day at Crockett, where pupils come from many places and speak many languages, students from Tempe and Phoenix, old and young, had little difficulty communicating. They exchanged fewer words, more smiles and hugs.

It was good for the soul, Forbes said.

“Those in Student Council are spirited, and they’re expected to be good leaders for the school,” Forbes said. “But to have them go outside their comfort zone, just to make a kid happy, is a better lesson than I could ever teach.”