A Thanksgiving story: Tempe employee made most of opportunities that gave him new life of dignity 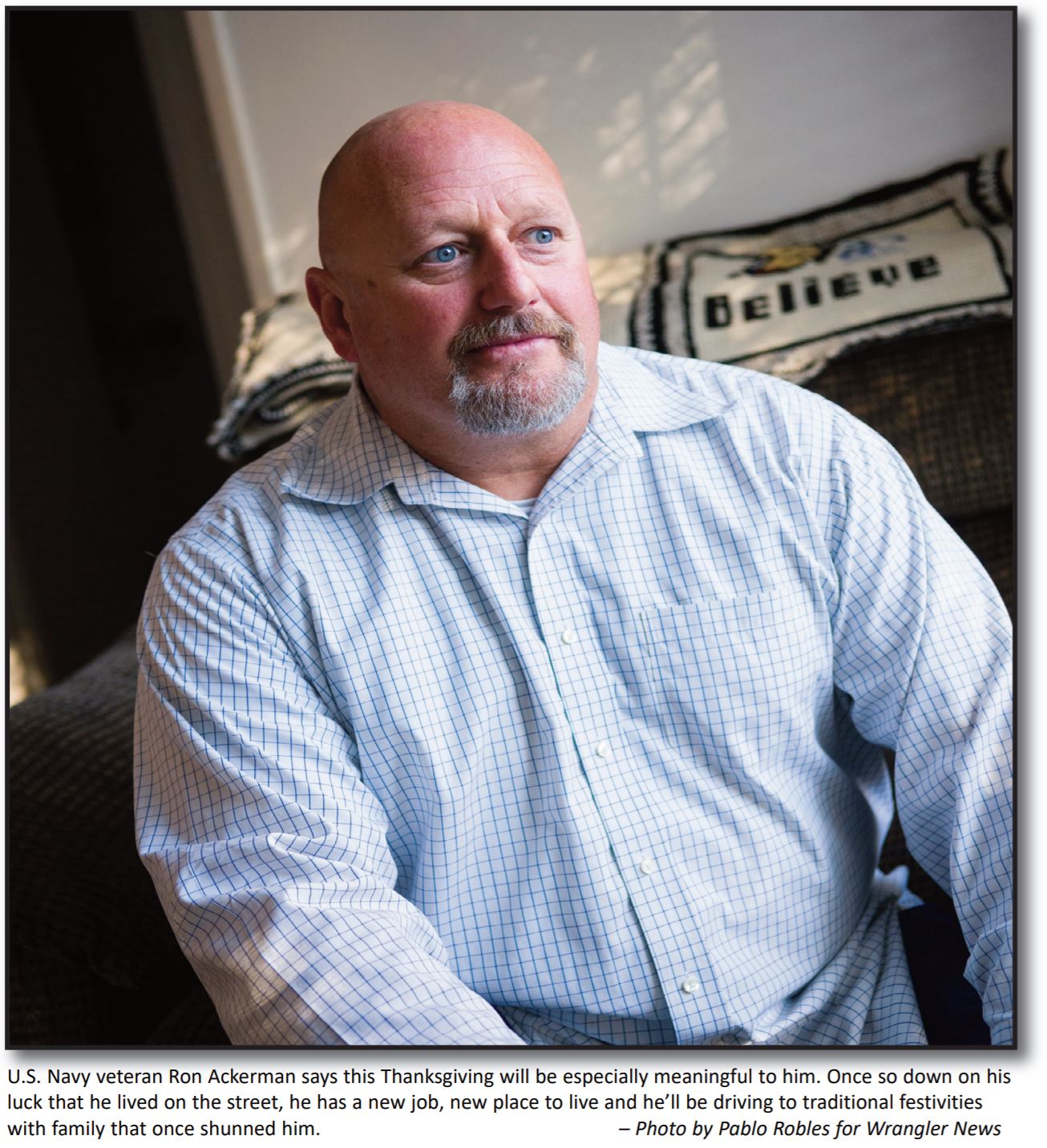 The alarm in Ron Ackerman’s head goes off promptly at 3:30 a.m. five days a week, rousing him from peaceful sleep in his two-bedroom Tempe apartment.

Ackerman’s shift as a Tempe city employee starts well before dawn, and he spends his day improving and beautifying the city’s parks, clocking out as many others are just ending a late lunch.

Early afternoon is the best part of the day for the U.S. Navy veteran, former small-business owner and community volunteer. He heads home and sneaks in a nap, if his two rambunctious pups, Chiweenie brothers named Cracker and Jacks, allow it. Later, he may slap a steak on his George Foreman Grill, perhaps fire up his dehydrator to make jerky or see a movie with friends.

Life is good. It wasn’t always. And that’s why this Thanksgiving is so special to him.

“I busted my butt to get where I am right now,” the 46-year-old Ackerman said. “I know it would take one stupid thing to end it.”

Born in Southern California, Ackerman and his older sister were raised by their single mom, who gave them “long leashes as kids.” He graduated from Marina High in Huntington Beach, where surfing class was an elective, and rode the waves in the Pacific as often as he could.

Ackerman enlisted in the Navy and was stationed in San Diego. On his ship, he learned combat sport, a contact discipline in which two opponents fight each other. After four years, Ackerman competed in mixed martial arts, primarily in Japan, and started a commercial door business.

Then, in 2008, his life came to a screeching halt when a car he was driving was T-boned. Ackerman suffered injuries to his shoulders, ribs and lower back, so severe that doctors put him on high doses of painkillers, including OxyContin.

“It was a time when no one really knew about pain management, and I became addicted,” he said.

For the next 12 years, Ackerman struggled with his addiction, seeking out street drugs when his prescriptions were cut off, and entering rehab multiple times. All the while, he hid his opioid dependence from his family.

“Addiction was taboo with my family, and so I wasn’t up front with them,” he said.

Ackerman lost everything — his fiancé, his business, his home and his family, which had tried to intervene, but ultimately left it to him to get well.

“I came to Arizona to get clean,” Ackerman said. “I had lots of friends in California, and they were not the best friends as far as being sober. So I came to Arizona knowing nobody and having no people to call.”

With no money, no home and no job, he lived for two years in his car, through cold winter mornings and scorching summer heat. He suffered heat stroke while working a day-labor job, and snagged only minimal sleep in the middle of the night when temperatures cooled  enough.

“I had a phone, and I’d spend lots of time on online forums, learning about how other people dealt with addiction,” he said. “Almost on a good note, I got sober while I was homeless.”

One night, while sleeping in his car in a Tempe grocery-store parking lot, a police officer approached and told him about I-HELP — the Interfaith Homeless Emergency Lodging Program.

I-HELP was started in Tempe in 2006 by the Tempe Community Action Agency and Tempe Interfaith Fellowship to provide shelter at area churches for people experiencing homelessness. It is sustained by local faith organizations that provide overnight sleeping spaces and by hundreds of volunteers who serve evening meals to program enrollees.

“I don’t know where I’d be if I didn’t hear about I-HELP,” Ackerman said. “When I lost my car, I was at rock bottom.”

With a comfortable place to sleep every night, he began volunteering at TCAA’s Food Pantry, packing boxes for other people in need and driving its mobile trailers. These trailers provide showers and laundry services to homeless people every day of the year.

“Volunteering makes their world a better place, and it makes me a better person,” Ackerman said, noting that doing for others has been a critical part of his five years of sobriety. “I was getting help, so I wanted to help others. It also put me past the point where I was having cravings and kept my mind off my own problems.”

But Ackerman still needed to fill the long daytime hours. He started visiting the Tempe Library, using its computers to look for work or to read.

“I wanted to be around the right people,” he said.

One of those people spotted him near the city’s Homeless Outreach Prevention Effort office in the library. Since its inception in 2016, HOPE has provided services to homeless people in Tempe, including street outreach, case management and connections to shelter and housing.

Since the city ramped up its homeless outreach efforts in 2017, 1,362 people have received permanent housing in Tempe, and 1,348 chronically homeless people have been served, according to city records.

HOPE employs 11 people, including Kelly Denman, a homeless-outreach specialist who built a relationship with Ackerman.

“I don’t want to stereotype, but Ron didn’t appear to be homeless. He’s just this guy I saw every day,” Denman said. “I saw him talking to some I-HELP people, and I approached him, and at first he declined, ‘I’m good, I’ll be OK.’ He turned me down probably 10 times.”

She eventually learned his story, about his military service, the details of his addiction, eviction and car troubles. When Ackerman finally accepted help, Denman got him qualified for a subsidized housing voucher, and he moved into an apartment in Phoenix.

Denman also knew about the Tempe Works program, which City Councilman Randy Keating brought to the Council in 2017.

“Tempe Works offers a path out of homelessness when we combine employment with access to shelter, housing and social services,” said Keating, now Tempe vice mayor. “This latest investment (the expansion of staff) allows the city to assist more people who want to increase their self-sufficiency.”

Denman thought the program would be perfect for Ackerman.

“This is a guy sitting all day in the library and he wants to be doing something with his time,” she said. “He has shelter, he’s sober, he has a driver’s license. So many boxes were checked in my heart on what a good employee he would make.”

Ackerman was hired by Tempe in 2018 as a full-time temporary employee, working weekdays from 4 a.m. to 12:30 p.m., cleaning public restrooms in city parks, the very spaces that previously were his home.

Later that year, with enough savings, he gave up his housing voucher, and moved into a Tempe apartment.

“I wanted them to give (the voucher) to somebody who needed it. I didn’t want to be dependent. I wanted to be on my own,” said Ackerman.

He bought a car.

Ackerman quickly moved on to a team overseeing maintenance of park infrastructure citywide — picnic tables to playgrounds to lighting. His supervisor, Ruben Wilkinson Jr., taught him to be a tradesman, basic plumbing and electrical work. Ackerman, when finished early with assigned tasks, would ask to do more.

He is looking forward to applying for a permanent city job soon, and Denman has signed on as a reference.

“He totally deserves it,” she said. “He’s put in countless hours in a non-benefits job. He stays late. He shows up and does more than he’s required to do.

“His dedication, his passion, his heart … Tempe is lucky to have him.”

Denman said she’s never seen a success story like Ackerman’s, someone who “worked the whole system, used every single resource for what it was intended to do, became successful and moved on.”

He stays in touch, and assists her with homeless outreach by referring people whom he meets in the parks. Perhaps they, too, can qualify for I-HELP and housing vouchers, even get a good job through Tempe Works.

“Ron inspires me,” Denman said. “He truly is the reason for what and why we do what we do.”

On Nov. 24, Ackerman will pop Cracker and Jacks into his car and head to an extended family Thanksgiving celebration at his mom’s home in Huntington Beach. It’s his fifth straight year for such a gathering, one that he regrets missing out on for many years prior.

“I wasn’t being honest with my family during those dark times of my life,” he said. “When I came to Arizona to get sober, I had AHCCCS (Arizona’s Medicaid program), and I always asked to be drug tested at every visit. I saved the reports until I had about 20 of them, and I sent them to my mom.”

When she received documentation that he was sober, “she was just proud and glad that she had her son back,” said Ackerman, who now visits his family several times a year.

“I’m building back bridges that I destroyed on my own.”

For their Thanksgiving feast, since his mom is a vegetarian, the meat eaters in the family will “group up prior and see who’s getting the ham, otherwise we’ll have to deal with her soy molded-like turkey.” There will be all the trimmings.

During the drive to the coast, Ackerman will have time to reflect on the blessings given him when he needed them most: a roof over his head, steady work, dignity, respect, sobriety, the ability to serve others.

“I’m thankful for all my family and friends, the people that I’ve met along the way who believed in me,” he said. “I don’t take the help I received for granted. I knew I didn’t have many chances left.”

Janie Magruder
Previous articleDon’t be blue, stay out of the red on Black Friday
Next articleW. Chandler author rings up riveting tale in new book about living with a disease with no cure